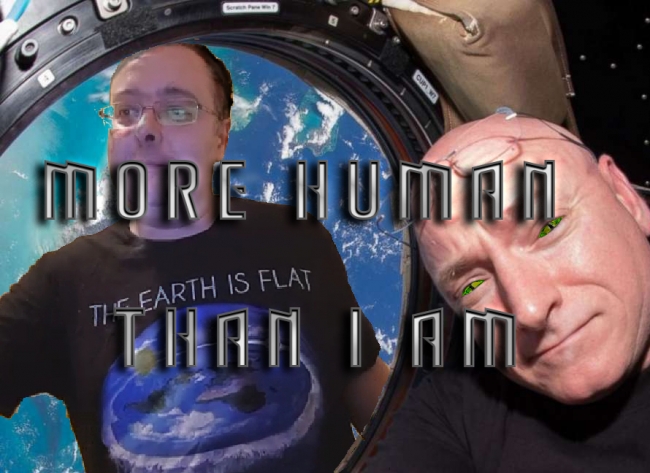 We have long time listener and friend of the show Alan Holman on with us today, to talk about topics that will make your mind whirl!
–Cancer cures? Check! FE? BIG check! Vaccine lies? Oh, yeah!! 9-11 was an inside job? You think it WASN’T?? Reptilians?? Can you say “Kinninigan”???
–From his site, Author Alan Holman’s Microcosm:
“I’m a person from Saskatoon Saskatchewan, Canada. I’ve written some stuff, acted in stuff, and I used to be a volunteer broadcaster at a community radio station.”
–On “Roadworx” we check in with Zach “Too Nice For Rice” Zabala as he quickly approaches Josh’s homestead and the historic FIRST hug between 2 members of Iron realm Media!!
–We have a full house in chat today…including returning old friend and new father Syllamo, who shares his blog. Josh reads it, and we all have a tear in our eyes:

“A Baby Girl To Save The World”

Oh, what pressure to know that you have just brought into this world a living gem which will have to claw and fight her way to freedom or forever remain an obedient slave.

To raise her to have the love, strength, and tolerance of her mother along with the knowledge, boldness, and honesty of her father. To face hardship with love, confidence, and determination coupled with fearlessness, drive for truth and outspoken abandon. To have compassion, forgiveness, and empathy for those which would do her harm and to genuinely care about what it is to be ‘human’. To not take to heart what others may ‘say’ about her while never stooping to their level.

How do I make sure that she is not crushed by the very same ‘system’ which claims to want to ‘save’ her? To not ‘participate’ in her slavery while manifesting her liberty.

How do I guide her into being the ‘hope of the wold’ (the children are our future) without holding out for her to ‘save’ anything but herself? For her to be what she will be without pressure and manipulation? To teach her everything about the technology she will be part of without it swallowing her whole?

To question and dig deeper into our collective ‘history’ which is written by the ‘winners’?

To become truly ‘educated’ while having her attend the ‘indoctrination’ centers?

To not get lost in mass debate and to not participate in the game of tearing each other down?

To teach her life skills and real ‘value’ amongst a consuming, ‘disposable’ society?

To not be willing to do what she is told without at least asking why and demanding an answer and accept even if that answer is not what she wants to hear?

To not take herself too seriously as the realizes that the more she learns, the less she knows?

Being in a hospital for two days, I realized that it is like the time I spent ‘questioned’ at the United States border; all based on fear where ‘what if’ reigns supreme. In that border ‘incident’, I was handcuffed to a bench for my own ‘safety’. This is the type of thing that I will not know how to share with her.

Most of the above words were written 2 days after the birth of a baby girl. Now it is 3 months later. So many incredible moments have occurred since then.

I have so many questions as I watch and participate in the beginning phases of this amazing soul’s ‘development’ into our world (perhaps I should call it Dogma). To observe her coming to life with the environment around her is an incredible experience as she plays and notices things around her while beaming a toothless smile.

She smiles, she screams, she laughs, she cries, she eats, she shits and she is very aware of things around her. I could go on for hours describing this wonder of life but will spare you all the goo.

She has never had any screen time as television programming has long been a thing of the past for me and the computer screens we turn off or away. How long will I be able to keep her from seeing these things and I really should not deprive her of the experience but rather prepare her for it so that she has a solid contextual basis of awareness as she grows within a surveillance-based world.
She is already spending a lot of time outside with a few experiences of just laying on the grass. Think about that for a second, imagine experiencing laying on the grass for the first time ever.

In essence, my job is to guide her into becoming more human than I am, for this is a true evolution of species.

This when one realizes that change starts within each and every one of us – it starts with YOU.”

Blood suckers have you traumatized to the point of self-harm? Huff a bunny and listen up, Josh hits us hard with some MK Ultra-type stuff today, hold on… –See the link if you need resources for YOUR Trauma Bond. –Do NOT take those supplements for your heart health, says MSM. So I immediately choke down...