Moonmoon? Real! Evolution? Not So Much… >> 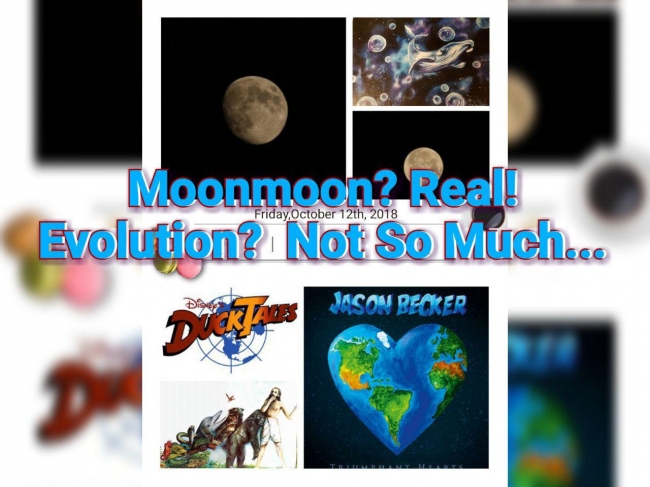 “Two moons walk into a bar…”
“What do you get when you cross a moon with a moon?”
“…I know…let’s call ’em Moonmoons!”
Three setups.
Two are Jokes.
One is Science.
Or…maybe it’s ALL a big joke? One thing is certain…the joke’s on us! Why oh why do we give these jokers 3500 BAZILLION DOLLARS a day to hand us back Churchill quotes and CGI jokes?? Or, when confronted face to face about bubbles in space, toss out a few #FlecksOfPaint…
–All jokes aside, moonmoon is a real thing, and it is not even CLOSE to funny anymore…
–A ray of hope: More than 500 of the world’s top scientists have come forward to raise their concerns about Charles Darwin’s “outdated” theory of evolution, jointly claiming that the 19th-century science is “unscientific” and does not adequately explain life and human creation. Sadly, it seems their questions are leading them down the road to alien intervention…playing right into the Project Bluebeam schemes…following our COTUS sending us all a text, and all…
–Steven Hawking’s last paper made him smile…awww…and…is it possible…we were WRONG about the strangeness of his longevity with ALS??? “Why?!?” you ask. See the next bit:
–Jason Becker has unveiled a new song, “Valley of Fire,” from his upcoming album, Triumphant Hearts. The nine-minute track features Becker alongside “The Magnificent 13,” a guest list that includes Steve Vai, Joe Bonamassa, Paul Gilbert, Neal Schon, Marty Friedman, Michael Lee Firkins, Mattias IA Eklundh, Greg Howe, Jeff Loomis, Richie Kotzen, Gus G, Steve Hunter, and Ben Woods.
Becker first rose to prominence as a teenager when he was one half of the technical guitar duo Cacophony with Marty Friedman. In 1989, at only 19 years old and after wowing audiences all over the world, the young virtuoso became the guitarist for David Lee Roth, following in the huge footsteps of Eddie Van Halen and Steve Vai. He wrote and recorded with Roth for the former Van Halen frontman’s third solo album, A Little Ain’t Enough and was poised for superstardom when a nagging pain in his leg was diagnosed as Amyotrophic Lateral Sclerosis (ALS), a fatal condition with a life expectancy of maybe five years.
That was 29 years ago. Becker lost the ability to play guitar, walk, talk and breathe on his own. But never lost his will to live or his desire to create music. Communicating through a series of eye movements with a system developed by his father, Jason spells out words as well as musical notes and chords. He imparts his musical vision to his team who then can input the notes into a computer, edit the parts to his exacting standards, and then generate charts for session musicians. His inspiring music and life story have been the subject of countless news articles, magazine cover stories, and an award-winning documentary, Jason Becker: Not Dead Yet.

There’s A THERE There.

One of our brothers from others, known as Baldidni, The Pantless Powerhouse, shares an amazing story today. Last Friday he was in such severe nerve pain that he was considering severe ways out of that pain, and while laying there in agony he tuned in to our little YT show Have No Sphere. We collectively...

Jumping Jeff Bozos, Batman!! What a week! What a show!! What?? A show??? We went old school, like, totally, man, let’s cruise to the arcade, then we hit the kangaroos hard, and debut a new Aussie Awesomeness segment with LC!! –Josh has become a hitman for the hawks! –Dude, what’s MINE say?? Ostrich?? –They ARE...

I’m not even sure, but thanx to Special K for the show title. We…well, WALT was off a bit today, no mic, on a phone, out of sorts. But the love from the Scouts and the Iron Injextion always helps!! EPic!! –We hear from IRON Mike himself!!! –The Hubble is broken, so is science no,...