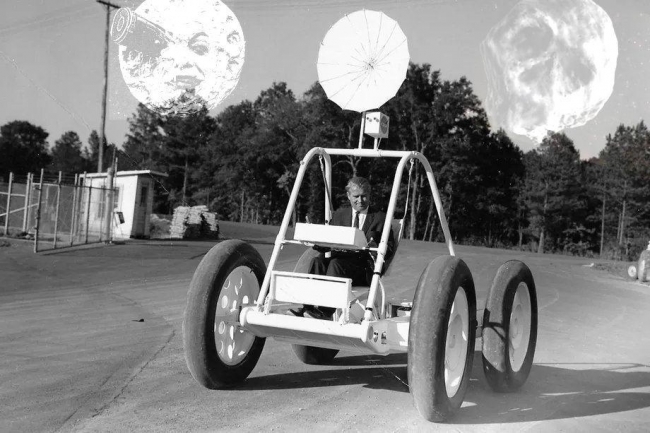 Yeah, yeah, I KNOW the name of the city is ACTUALLY Chengdu…but Dub_C’s version makes for a much better show title! Thanx, Iron Scout! We need all the help we can get around here! “Iron Realm Media: One Click Away…From Perfecrion.” Oops. Ah well…much like our National Are-o-not-ical & Space Admin folks, we can’t be on top of our game at every turn, now can we? Who can be expected to keep up with the whereabouts of stuff like moon buggies, moon baggies….and bears…oh, my?
–Scientists are planning to hang a man-made moon above the city of Chengdu…their very own Moonmoon!! It is eight times brighter than the real moon and designed to complement the moon at night. It will cast a “dusk-like glow” over the city, according to the satellite’s developers. The artificial moon will be capable of lighting up an area as large as 50 miles in diameter, which is a total area of more than 1,960 square miles, but with an illumination range that is so precise it can be controlled within a few feet. Within a few feet. Within a few feet. And no one will lose THAT remote, right??
–NASA lost it. Looking for your remote? Car keys? Cell phone? Do NOT ask NASA. Thanks to improper management, NASA has lost a wide array of historical spaceflight memorabilia over the last few decades — such as an old lunar soil bag, former spaceflight hand controllers, and even a test lunar rover. That’s according to a new report out today from NASA’s Office of the Inspector General, who says a few unique pieces of storied spaceflight property have either been misplaced or taken by ex-employees.
–IT”S BAAAAACK! “Death Skull From Space II: I Got A Rock” Aptly nicknamed “The Great Pumpkin,” asteroid 2015 TB145 last flew past Earth on Oct. 31, 2015. Now it will hurtle past on Nov 1, 2018. Cool, yeah? But, here’s the REALLY spooky part: it won’t be back until…late Oct. of 2088. Because science!
–Just how much DOES all this #SpaceLettuce cost?? In 2015, astronauts aboard ISS found out. Real leafy greens, grown locally — in space. The experiment was about more than salad. Astronauts are studying the effects of microgravity on plants. If we’re going to ever send humans to Mars, understanding how to grow veggies is going to be very, very important.
At 16 pounds, it’s $145,600 to $690,900. Is that WITH croutons??