McCain Plays Coy About Immigration Plan, But Ron Paul Knew What Was Up And Warned Us

McCain chides Republicans on immigrants: ‘What do you want to do with them?’

Sen. John McCain (R-AZ) on Sunday challenged Republican lawmakers who oppose a bipartisan agreement to give legal status to undocumented immigrants as a part of comprehensive immigration reform.

“The are 11 million people living in the shadows, I believe that they deserve to come out of the shadows,” the Arizona senator told Fox News host Chris Wallace.

“Under your plan — although they wouldn’t get the path to citizenship until you got this border enforcement certification — they would almost immediately get probationary legal status, which basically means that they could continue to live in this country legally,” Wallace noted. “Some of your critics on the right are saying that’s amnesty.”

“Well, I don’t think it is amnesty to start with,” McCain insisted. “Second of all, what do you want to do with them?”

“Third of all, it’s a tough path to citizenship, you have to pay back tax and learn English and have to have a clear record and get to the back of the line behind to the people who have come here legally or waiting legally. So, I just reject that.”

Gang of Eight: DHS secretary to determine if border is secure
Published 8 February 2013 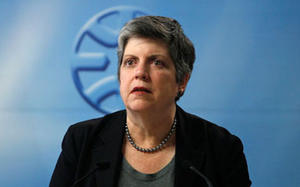 Even supporters of immigration reform admit that security along the U.S.-Mexico border should be improved so that legalizing the status of the eleven million undocumented immigrants currently in the United States would not become a magnet for drawing even more undocumented immigrants into the country. How do we know, however, whether the border is secure enough for the legalizing process to begin? A bipartisan group of senators, known as the Gang of Eight, has an idea: under the terms of the bipartisan framework for immigration reform, DHS secretary Janet Napolitano would make the final determination about whether or not the border is secure. Once she makes the determination that the border is secure, the eleven million undocumented immigrants would start on their path to a legal status in the country.

The 124,631 “apprehensions” by Border Patrol in Arizona in 2012 is the lowest number in 19 years, and the agency says that’s how they measure attempted border crossings.

In plain English, according to CBP, fewer people are trying to cross the border.

Unions could again be key to immigration reform

Washington (CNN) — It should come as no surprise that prominent union leaders are among the first group President Barack Obama courts as he seeks support for overhauling immigration policy.

It was organized labor that helped ensure defeat of a bipartisan effort to reform the nation’s immigration laws five years ago.

At that time, the AFL-CIO and other prominent union groups came out against the initiative, fearing a proposal for a temporary guest worker program for seasonal workers would weaken union membership and bargaining clout.

That led to a handful of liberal-leaning Democrats to vote against the bill, including Sens. Sherrod Brown, Tom Harkin and Debbie Stabenow.

Mindful that a potential split in the Democratic coalition this time around could again prove fatal to the passage of an immigration bill, Obama met on Tuesday with more than a dozen labor leaders.

Leaders of the immigration advocacy group United We Dream (UWD) told The Raw Story on Wednesday they would continue to exert pressure on President Barack Obama and lawmakers to create a clear route to U.S. citizenship for the country’s undocumented immigrants.

“DREAMers are not good at accepting no as an answer,” said the group’s advocacy and policy director, Lorella Praeli, referring to those still fighting for the passage of the DREAM Act of 2010. “If the president is saying that he will not stop the deportation of members of our community, we do not take that lightly. And we are in this fight for permanent relief through the legislative process. But if that does not go where we think it will go, that does not mean that we will give up on our communities.”

For those who are still quite fond of their 4th Amendment rights, Ron Paul raised the alarm over on his official Facebook page that the Senate’s current immigration reform package is a civil liberties nightmare.

The former Congressman and presidential candidate warned that the proposed McCain/Schumer immigration “reform” plan, as it exists now, would usher in warrantless surveillance of US citizens using drones, a de facto mandatory national ID system barring those without it from working legally, increased federal database information on US citizens, and the further erosion of our core civil rights under the guise of keeping our economy “safe” from a mostly non-existent wave of illegal immigration.

“Harper rightly notes that E-Verify is in fact a national ID card, writing last week that, ‘the system must biometrically identify everyone who works—you, me, and every working American you know.

There is no way to do internal enforcement of immigration law without a biometric national identity system.’”

Minority Report could be closer than we think. Open those eyes nice and wide for your iris scan, citizen!