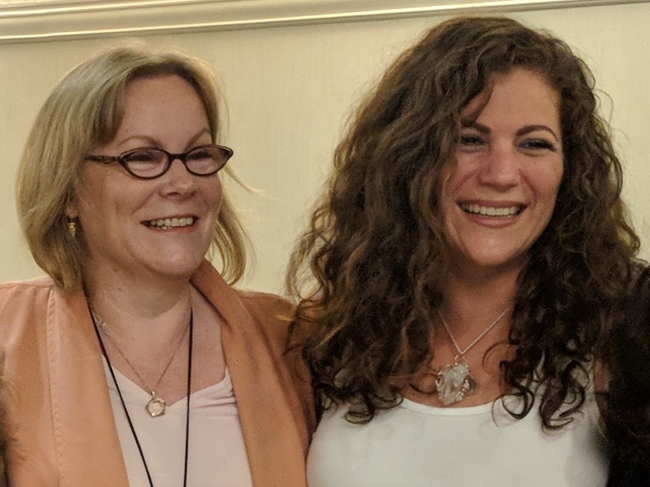 Former British journalist and Hypnotherapist, Alison David Bird, C.Ht., forged a lasting connection with Pleiadians, and the authentic GFL, after being introduced through a client under hypnosis at her Martha’s Vineyard practice, in 2012.
In 2013, She was made custodian of a new frequency of transformative energy called MARCONICS, with instructions on how to develop a ‘No-Touch’ protocol, that would harness Divinely Directed energy from the Cosmos, targeted to release humans from the density, enslavement and fear of their karmic creations (3rd Dimension) and bring them into physical merger with multiple levels of Higher (Self) Consciousness, in the SHIFT to becoming fully Integrated, Multi-Dimensional, SOVEREIGN Beings. An evolution described by Galactics asThe Birth of the Avatar Race.

In 2014, Alison partnered with former student, Lisa Wilson, LMT, an energy healer and teacher. Lisa had began to receive channeled instructions from Archangel Sandalphon, detailing a process to create the infrastructure to house the energy of the Oversoul. This process became the: Marconics Infinite Light ‘I AM’ Merge –An intricate alignment of Sacred Geometric forms constructed in the physical and subtle bodies.

Todays discussion was quite fascinating and definitely worth your time whether you’re listening to it again or for the first time!

The energy is rising right along with the temperature it seems. We’re in a time period where a certain astrological alignment is here and hasn’t been seen for 2500 years during the time of Alexander the Great! The world has seemingly gone crazy and the intensity of energies present are expected to rise through the...

Having just gone through another powerful full moon, and a super moon at that, we thought it was a good time to have on our favorite astrologer Claudia Thompson again and are we ever glad that we did! It’s hard to describe all of the things that we talked about as it pertains to full...

We had our first psychic on with us today and we think it was one of our best shows in quite some time! Rev. Amirah Halls spiritual journey started many years ago and her story was fascinating, to say the least! Her marriage had crumbled and she was heartbroken. Her Dad died and she developed...