Vladimir Putin, President of Russia, was flying an eerily-similar plane flying an extremely-similar path when a missile struck the Boeing 777. We now know that Ukraine has pulled this kind of crap before, and that they immediately – and I mean, within 30 minutes, had a statement drafted on how it all went down: That Russia and/or Ukrainian separatists (who side with Russia) carried out the missile strike to inflame tensions even further in the area, as well as kill people from other countries, as well….which there is evidence it was Ukraine that carried it out, so a false flag attack just makes more sense.

That’s why I’m so glad we have people like Kev Baker to tell us what’s really going on with this ongoing situation. My take on this is: Kiev decided to play dirty ball for some reason and shot down a passenger airplane carrying almost 300 civilians from Amsterdam to Kuala Lumpur, and they were also cooperating with another airline that was predominantly Dutch, so they’re thinking that there may be Anglo-Saxons, and not just Asians onboard. Which would mean a gold mine for BBC, FOX News, and CNN in terms of shock and awe value to garner ratings for their networks. I can only imagine the political crisis this is going to set off.

According to Tyler Durden of ZeroHedge:

Curiously, Anton Gerashchenko, advisor to Ukraine ministry of internal affairs, had a prepared explanation for everything that happened half an hour ago, long before Ukraine even announced it would begin a probe into the flight crash: 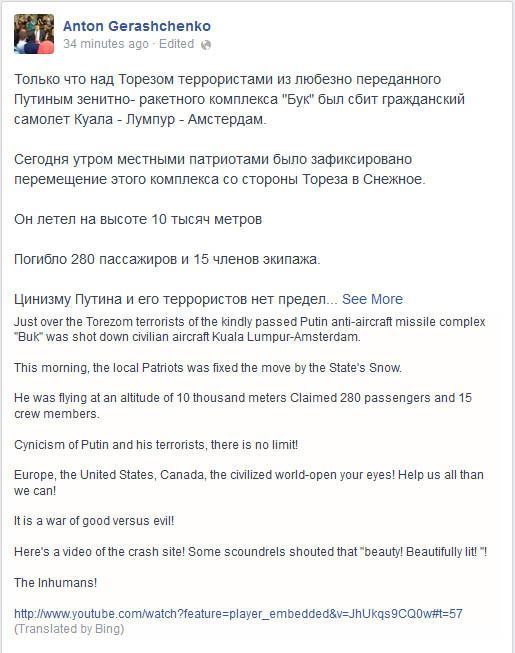 But on the surface, and to conspiracy theorists in particular, it’s supposed to look like they were aiming at Putin’s plane. Hopefully Kev Baker can sort all this out for us when he airs later on this afternoon, at 4pm Pacific Standard Time.