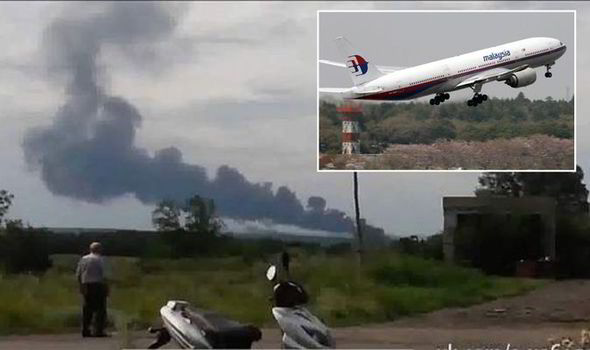 UPDATE: Just as I thought, the mainstream media is trying to say that the BUK missile system that took down Malaysia Flight 777 was developed by the Soviet Union (i.e., that Russia is responsible for this crash). According to Mike Rivero over at WhatReallyHappened:

The BUK missile system is thought to be the weapon that downed the Malaysian 777 over Ukraine. FOX News is selling the idea that this system had to be smuggled across the border into Ukraine from Russia but the fact is that prior to the overthrow of Ukraine’s elected government by a US-backed junta, Ukraine imported the BUK from Russia and even developed an enhanced radar systems for it which they market to other users of the system. So it is a FACT that the Kiev junta has this weapon. At this point I am thinking Kiev shot the 777 down to try to pin on the Russians, then when the wreckage fell short of the border, on the independence fighters in Eastern Ukraine.

One other note. Unlike a MANPAD, the BUK requires a full crew to operate, and cannot be launched by a single person. So if indeed the BUK destroyed the plane, it was a deliberate act, whether by intention or (like TWA 800) locking onto the wrong target.

According to Reuters, a Malaysian airliner carrying 295 people on board has crashed in Ukraine near the Russian border.

The Boeing-manufactured plane was flying from Amsterdam to Kuala Lumpur. The Interfax report said the plane came down 20 miles short of entering Russian airspace:

It “began to drop, afterwards it was found burning on the ground on Ukrainian territory,” the unnamed source said.

…A separate unnamed source in the Ukrainian security apparatus, quoted by Interfax, said the plane disappeared from radar at a height of 10,000 metres after which it came down near the town of Shakhtyorsk.

Interestingly enough, it looks like the plane went down in a region of heavy fighting between the Ukrainian government and pro-Russian separatists, which means the plane could’ve been shot down by Ukrainian or Russian military. However, it was in Ukraine’s airspace – and not in Russia’s – which would make a “false flag” carried out by Ukraine to blame on Russia plausible.

Russia has already been blamed in the past week for shooting down a Ukrainian fighter jet (which Russian officials are calling “absurd”), so it’s not outside the realm of possibility that a passenger plane’s downing would be blamed on them, as well.