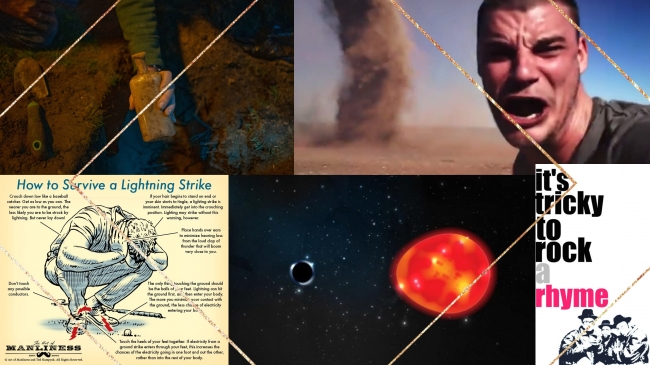 We get caught up in quite the Willy Willy this morning, flinging Faraday all about the plane, energies are all wackadoo, coffee abandoned, but we forge ahead (YES! Noice one!) and come up with a few brain bursts in spite of the extra bad mojo that has us all in a weird place.

–We expound on Lucas’ galvanic cell earth idea, bringing the polarising of energies to play on the gateways allowing demonic intervention into our Realm. Lots of personal attacks of late, while we all feel……off…..
–Giant swords? Punt guns?? Who would know, what with the Googoo mod helper-outers deleting links as fast as we can post them in chat. Lucas quickly developed a game to see who can get THEIR link deleted first for a chance for Dave Wiess’ Flat Earth Sun And Moon app. Our Iron Maide, Lady Liz wins quickly!
–Space Dust: It’s Tricky!
–Speaking of tricks, how about this: ““When you look in a different way, which is what we’re doing, you find different things,” said Kris Stanek, study co-author, astronomy professor at Ohio State and university distinguished scholar. “Tharindu looked at this thing that so many other people had looked at and instead of dismissing the possibility that it could be a black hole, he said, ‘Well, what if it could be a black hole?’” Unicorn farts. Is THAT what that smells like??
–Or is it MOXIE air-monoxide?
–Planting seeds? How about 142-year-old seeds??

Nachiketa:
​they are wolves in sheep skin

NeMo289v:
​yup that helicopter on mars .. was right on the heels of FAA making it legal the fly drones over people… now you will see amazon delivering drone packages

D C:
​HEy @Scott LevelRealm IRM are like seeing Ozzy live – if you catch the show on a good day it’s epic