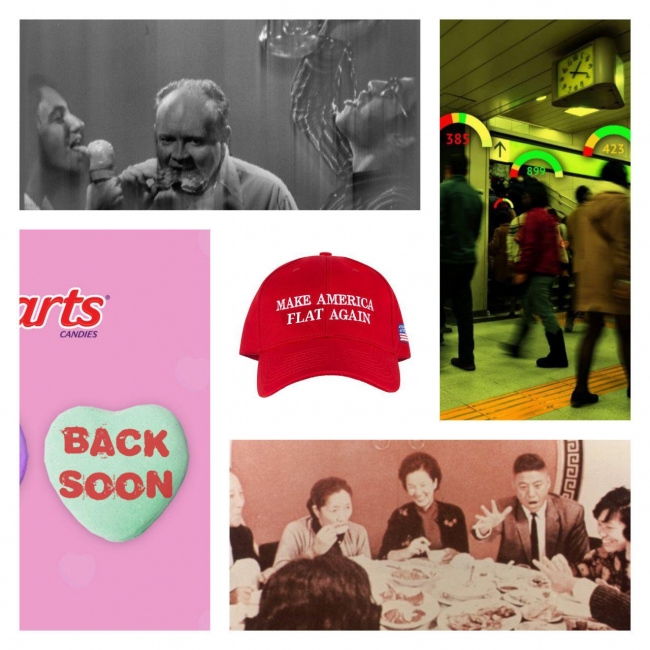 Today on Ironworx, Walt comes in HOT! The show starts peaceably enough, hellos are said, pleasantries exchanged, a heartfelt “Get Well SOON!” is sent out for Zack “Too Nice To Get Sick” Zabala, everything seems calm, cool, collected…and within minutes, out of nowhere, a #WaltRant breaks out!! With so many truthers on social media falling for the “Orange Mad Bad/Orange Man Good” programming, liking and retweeting and rinsing and repeating all the whining and the bleating…AAAAAARRRGGH!! The fire spreads, no nano-embers required, and soon there is a #DoubleRant underway, as a different take is heard in a great and hopeful #JoshRant. We land on wearing a red hat…to trigger folks…red hats that say “M.A.F.A.” (Any guess on what that “F” stands for?)
–WTF?! The Chinese Government has developed a mobile app that tells users if they are near someone who is in debt. The app, called a “map of deadbeat debtors,” flashes when the user is within 500 meters of a debtor and displays that person’s exact location. In a mad race to replicate “Black Mirror” scenarios EXACTLY, their full social credit system will be operational in 2020 and plans indicate it will be used to bar people with low scores from traveling, getting loans, and getting jobs. A person’s score can be lowered if they do things like playing an excessive amount of video games or POSTING FAKE NEWS.
–“Be Mine?” Not THIS year. No more NECCO.
–Was the meteor that hit the moon during the Blood wolf eclipse actually star-shine through the moon??
–One British wag has spotted some highly unusual images among the Golden Records, vinyl ‘messages from our planet’ sent into space on the Voyager probes. Some of the pictures carefully selected to represent our species to aliens are… er… very, very unusual, it has to be said. One man, who appears to be eating toast backwards, is just the tip of the iceberg – there’s also a man pouring water directly from a jug into his mouth. The strange images were picked out by British writer Richard Littler, creator of the excellent Scarfolk.