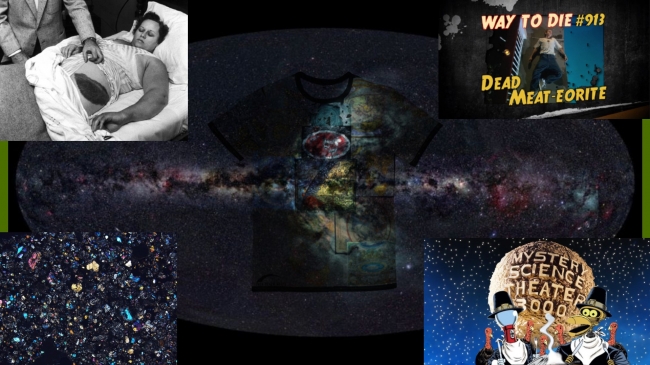 Gooble gobble!! Wait, that’s “Freaks”! Gobble globies!! Drat! Still not right! OK, almost…here we go: Gobble gobble!! Yes, nailed it!!! Whether you spent your holidays lost in a holy daze or adrift in a tryptophane haze, we did it! We made it through. While some of us got to spend the time with family and/or FEmily, some did not. Some tried a bit of smacking, others just let the day be a day. Mitchell!
–“A Big Bruiser From the Sky.” n November 30, 1954, Ann Hodges experienced a rude awakening. As the 34-year-old lay napping cozily under quilts on the sofa in her Alabama home, she awoke with a jolt as she became the only human being known to have suffered an injury after being struck by a meteorite. The approximately 8.5-pound, 4.5-billion-year-old interplanetary traveler shot like a bullet through her Sylacauga house’s roof at 2:46 p.m. It banged into her large radio console and bounced onto her body, causing a large bruise on her left side. ” the only human being known to have suffered an injury after being struck by a meteorite.”
–The Alan pointed this out: “Dead Meat-Eorite”, Way To Die #913, is the final death featured in “Dead On Arrival”, which aired on December 7, 2009. Plot
At an outdoor pool party, a man named Stan tries to make friends by telling them about Christianity but is unsuccessful. Later, while standing beside the pool making friends with a girl, a stray meteorite descending towards Earth strikes Stan through the chest, killing him.
“Stan showed up alone looking for a like-minded soul. Little did he know, he had a date…with fate.”
Hhhmmmmm, it made me go…
–There might (DING!) be cracks in space-time (DING!), but humanity’s telescopes can’t see them. (DING!) The cracks, if (DING!) they exist, are old — remnants of a time shortly after the Big Bang (DING!) when the universe had just shifted from a hotter, more alien(DING!) state to the cooler, more familiar one we see today. Sure. 1 in 1.6 million. Or 1 in 75,000.