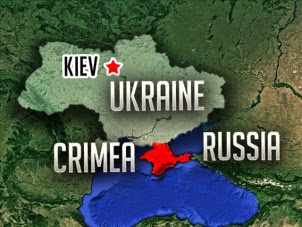 It reacted to Russian reunification. It’s inflicting punishment in response. How effectively for how long remains to be seen.

More on this below. According to Fyodorov:

“We are going to lose the irrigated crops this year. Maybe not 100 percent, but the greater part.”

Half of 120 affected hectares are in vineyards. Another 30,000 produce rice. It’ll take time to compensate for what’s lost, said Fydorov. Various options are being considered. They include supplying Crimean water by pipeline from Southern Russia’s Kurban region across the Kerch Strait.

Harvest losses this year could affect over 30% of Crimea’s agricultural sector.

High-quality wines, brandy and fruit juices are produced. Average annual production is around 120,000 tons of grapes and 14 – 16 million wine materials.

On April 26, Voice of Russia headlined “Crimean authorities say they have fallback water supply plan, not dependent on Kiev.”

Plenty of regional fresh water around, said Prime Minister Sergei Aksyanov. “Crimea will not be left without water.” Drinking water not affected.

“We have fallback plans.” There are no problems with fresh water. Land is being redrawn in likely most affected areas.

“Agricultural producers will receive compensations for losses.” No one will be left high and dry.

“We are also considering an alternative plan for drilling wells, and we are working on this day and night,” Aksyanov explained.

Kiev putschists “act like enemies trying to cause their former fellow citizens harm.”

“But they will get a proper assessment from the people of Crimea and will always be persona non-grata in the republic. Usually, those who mischief hatch, mischief catch.”

Kiev “sabotaged” talks. Only about 5% of water needed comes through North Crimean Canal sluices. Other amounts were halted.

Expect Kiev’s policy to be a temporary setback. Reunification with Russia promises far greater benefits than remaining in Ukraine.

He raised “the issue of political prisoners and urged the United States to use its influence for the release of protest movement leader arrested in southeastern Ukraine.”

According to Moscow’s Foreign Ministry:

The attention of the Secretary of State has been drawn to the proposals of the Party of Regions and public movements of the southeast regarding the beginning of all-Ukraine national dialog and constitutional reform.

Kerry assured that Washington will aspire to use its capabilities to encourage the Kiev authorities for certain steps to decrease tension and expressed hope that the southeastern regions will respond to these steps.

The parties have also discussed the measures being taken to resolve the situation with the detention of military monitors of European countries, who arrived to Ukraine upon the invitations of the Kiev authorities in the framework of procedures stipulated in the Vienna document of 2011 on measures to enhance trust and security and who went to the southeast without appropriate notification of public structures controlling the situation on sites.

On April 25, Eastern Ukrainian self-defense forces blocked a bus. Pro-Kiev intelligence operatives were aboard. So were OSCE monitors.

According to spokesman Yevgeny Gorbik:

OSCE representatives “denied any relation” to others traveling with them. They had “cryptograms and notebooks with secret notes.”

A Bulgarian officer had a notebook with notes in Russian which confirm his intelligence activities and speak of a meeting with agents.

No charges have been brought against them so far. But they’ve ended up in a company that calls into question the legitimacy of their activities.

The investigation is underway to find out what they were doing and where.

Stephen Lendman lives in Chicago and can be reached at [email protected] His new book is titled How Wall Street Fleeces America: Privatized Banking, Government Collusion and Class War. Also visit his blog site at sjlendman.blogspot.com and listen to cutting-edge discussions with distinguished guests on the Progressive Radio News Hour on the Progressive Radio Network Thursdays at 10AM US Central time and Saturdays and Sundays at noon. All programs are archived for easy listening. http://www.progressiveradionetwork.com/the-progressive-news-hour/