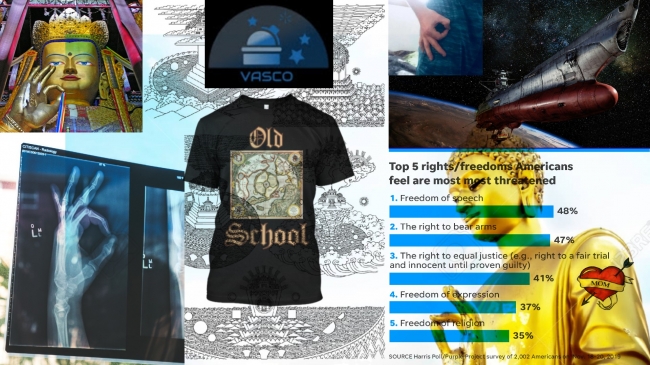 Today start’s with a #WaltRant triggered by a “news” “story” pre-show about some guy in trouble for and being investigated for the “OK” sign and he says it’s the old “Poke Or Punch” game and THEY say it’s a White Power hand sign and…AAAARRRRGH!! It’s all mind control! (*See story below.) Then Josh Explains that he played Beach Boys’ “Barbara Ann” because his mom Barb is here live on the show with us!! A historic first in Ironworx history!! Mom rocks!
–In ancient Buddhist cosmology, the universe was seen as essentially flat, with Mount Meru at the center of all things. Surrounding this universe was a vast expanse of water, and surrounding the water was a vast expanse of wind. Our world was thought to be a wedge-shaped island continent in a vast sea south of Mount Meru, called Jambudvipa, in the realm of Kāmadhātu. The earth, then, was thought to be flat and surrounded by ocean. Alas, Scientism arrived & all that thinking changed…or DID it??
–Retired Air Force General Warns: China Is Building A “Navy In Space” With Space-Based Equivalents Of “Battleships And Destroyers”
–100 mysterious blinking lights in the night sky could be evidence of alien life… or something weird, say boffins. VASCO is looking for aliens, but they need YOU! (see their logo in show pic!)
–Scientists Are Searching for a Mysterious Force to Explain the Universe’s Anomalies. Teams have looked for a “fifth force” in the universe within the Earth’s mantle, ultra-vacuum chambers, and in hypothetical particles such as “X17.” Finding it could help explain mysteries around dark matter and dark energy.
–“When you frame something as a threat, it creates a bit of a political response, and it creates division and encampments of special interest,” said John Gerzema, CEO of the Harris Poll. That “poll” says 92% of their rights are under attack…or not so much…
–NATO declares space ‘operational domain,’…uuuummmm…no.
–Purdie Sad…if you ask us. We hear that one musician actually claimed he played on early Beatles records without getting credit. In The Big Beat, E Street Band drummer Max Weinberg’s book of interviews with artists who influenced him, Bernard “Pretty” Purdie said he played on 21 songs by the Fab Four, as well as tracks by the Rolling Stones, the Animals and the Monkees, because the original drum parts were “way off.”
–The Alan Holman’s Show Rating of the Day: It was a colossal show (smile)!

* The Origin of “OK”
The Freeman
26 Feb 2017
“It started with a joke. OK, here’s the story. On Saturday, March 23, 1839, the editor of the Boston Morning Post published a humorous article about a satirical organization called the “Anti-Bell Ringing Society “in which he wrote:

The “Chairman of the Committee on Charity Lecture Bells,” is one of the deputation, and perhaps if he should return to Boston, via Providence, he of the Journal, and his train-band, would have his “contribution box,” et ceteras, o.k. – all correct – and cause the corks to fly, like sparks, upward.

It wasn’t as strange as it might seem for the author to coin OK as an abbreviation for “all correct.” There was a fashion then for playful abbreviations like i.s.b.d (it shall be done), r.t.b.s (remains to be seen), and s.p. (small potatoes). They were the early ancestors of OMG, LOL, and tl;dr. A twist on the trend was to base the abbreviations on alternate spellings or misspellings, so “no go” was k.g. (know go) and “all right” was o.w. (oll write). So it wasn’t so surprising for someone to come up with o.k. for “oll korrect.” What is surprising is that it ended up sticking around for so Then it got lucky. OK got lucky by hitting the contentious presidential election jackpot. During the 1840 election the “oll korrect” OK merged with Martin van Buren’s nickname, Old Kinderhook, when some van Buren supporters formed the O.K. Club. After the club got into a few tussles with Harrison supporters, OK got mixed up with slandering and sloganeering. It meant “out of kash,” “out of karacter,” “orful katastrophe,” “orfully confused,” “all kwarrelling” or any other apt phrase a pundit could come up with.”