Editor’s Note: It was not just Obama and his administration that tried to shove this manure down our throats. It was pretty much every single democrat in office, plus Hilary Clinton, who is the forerunner for the 2016 elections. Which means, it’s EXTREMELY important that we see this as a “democrat” issue, and not just an “Obama” one.

Liberal comedian Jon Stewart is more than a little annoyed with President Obama’s inability to control the narrative surrounding the release of Army Sgt. and likely deserter Bowe Bergdahl from Taliban custody, summing up his displeasure succinctly: “Oh shit.”

Stewart charted the strange progression of the Bowe Bergdahl saga during the opening segment of “The Daily Show” Tuesday night — from the story’s initial declaration as “A Magnificent, Wonderful Story” to its quick advancement to “An Absolutely Terrible, Disastrous Catastrophe That Is The Single Worst Thing We As A Country Have Ever Done, And Yes, That Includes When We Gave Syphilis To Prisoners.”

Stewart exposed the hilarious “cliche-off” between the administration’s “leave no man behind” rhetoric and their opposition’s “we don’t negotiate with terrorists” mantra.

And of course, he pulled no punches against the right-wing, singling out Fox News’ anger over Bowe Bergdahl’s father and his bushy Taliban-style beard (though he made no mention of the man’s Pashtun prayer to Allah in the Rose Garden on Saturday).

But Stewart seemed particularly perplexed by President Obama’s delusion that the American people would welcome Bergdahl back with open arms.

“You know what, fine,” he said. “It’s a difficult story, it’s complex, we don’t need to make a big deal out of this. It’s not like the administration is gonna make a big Rose Garden announcement, bring out the guy’s parents with one of them ‘I killed bin Laden again!’ moments.”

“You know that’s not gonna –” he continued, before halting and putting a hand to his earpiece. “Really? They f****** did that? Ok,” he said, burying his head in his hands.

The show cut to a clip from Obama’s Saturday Rose Garden press conference with the Bergdahls. “Bob, Jannie,” Obama said at the time. “Today, families across America share in the joy that I know you feel.” 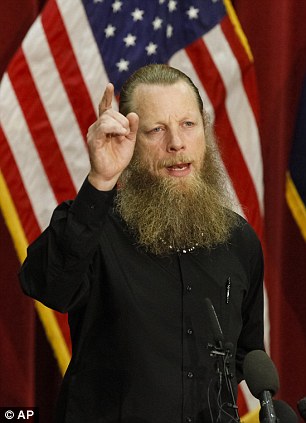 The Taliban was ‘thrilled’ when Bowe Bergdahl’s father ‘claimed the White House for Islam’ by thanking Allah in his press conference with President Obama, it has been claimed.

The father of the freed soldier – who former colleagues claim was a deserter – said he was speaking Arabic and Pashto because his son’s English was poor after five years in captivity.

But commentators accused him of giving the Taliban a priceless propaganda tool, with one saying extremist sources in Pakistan were delighted. 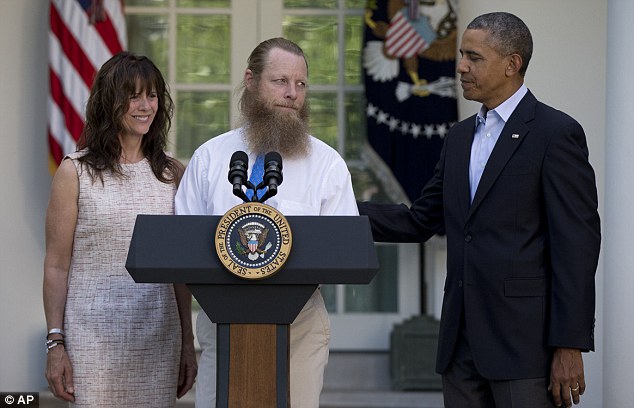 Controversy: During a White House press conference (pictured), Bob Bergdahl stood alongside his wife Jani and President Barack Obama and thanked Allah in Arabic after his son was freed in Afghanistan 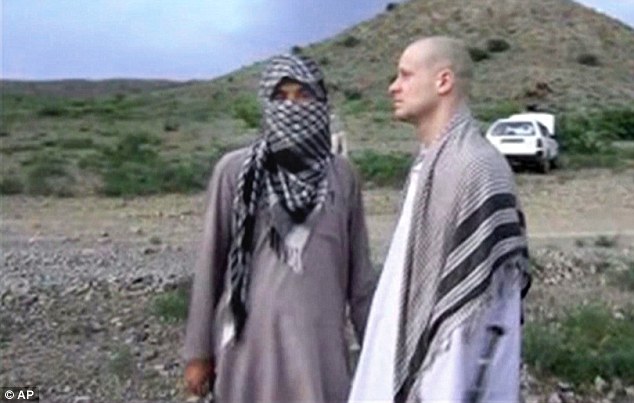 Mr Bergdahl spoke at the White House after 28-year-old Bowe – the only American prisoner of war in Afghanistan – was freed in exchange for five Afghan detainees held by the U.S.

Introduced by the President in the rose garden on Saturday, he spoke mostly English with some Arabic and Pashto.

‘I’m your father Bowe. The people of Afghanistan, the same.

‘To everyone who effected this… throughout the whole of American government and international governments around the world, thank you so much.’

The Arabic phrase bismillah al-Rahman al-Rahim appears prominently in the Koran and means ‘In the name of Allah, the Most Gracious, the Most Merciful’.

She told TV commentator Glenn Beck, who founded TheBlaze: ‘He definitely was, in a way, consecrating the area.

She added: ‘This is incredible, he’s gone way way beyond just a father reaching out to his son.
‘He’s actually putting so many lives in danger, and he’s giving a propaganda tool to Mullah Omar, who is the leader of the Taliban who the U.S. has been looking for for years.’Others, however, said there was nothing so sinister in the former UPS delivery man’s speech.After his son was captured by the Taliban in June 2009, Mr Bergdahl said he immersed himself in the language and culture of Afghanistan chiefly so he could understand the captors, and speak to them from afar.

He said in a previous interview: ‘I’m trying to learn a little Pashto so that I can speak to people… I’m trying to write or read the language.

‘I probably spend four hours a day reading on the region and the history.’

Stefanie O’Neill, a Bergdahl family friend, added to CNN: ‘Wouldn’t you try and connect with the people that had your child?

‘Bob and Jani did everything possible they could to ensure Bowe’s safety. And if Bob was trying to connect with them, it was to keep his son safe, I’m sure.’

The official reason given was a concern for public safety – but MailOnline learned that a row erupted between Mayor Fritz Haemmerle and former US Army Platoon leader Jonathan Kennedy, who lives in the town.

In an email to Mayor Haemmerle, who wanted to hold the celebration, Kennedy said: ‘If Individual members of the community wish to hold sedate, private celebrations to commemorate Bowe Bergdahl’s homecoming, they are of course free and welcome to do so.

‘It would be, however, a monstrous profanity if a public ceremony, financed by public money, were to be held.

‘It would be more monstrous still if this ceremony were to, in any way, heap undeserved adulation on Bergdahl, or to adopt the sickly hue of ostentatious jingoism that all too often colors such occasions.’

He added: ‘Until he is cleared of the charges against him, this man deserves no applause. For now, the only appropriate response is silence.’

In the 10-minute call Hagel wished the family well and told them the Defense Department will continue to support the soldier’s medical care, along with the process known as reintegration.

An official said Bob and Jani Bergdahl expressed their gratitude.

Earlier Wednesday, Hagel told reporters that the rush to judgment about Bergdahl is ‘unfair’ to his family.

The POW’s exchange for five Guantanamo detainees has provoked a storm of controversy.

Many accused President Obama of negotiating with terrorists and allowing a clear price to be set on an American life.

And while the soldier has been hidden from public view, being debriefed by military psychologists, many of his former colleagues have accused him directly of desertion.

Some claim six servicemen died in the search for the POW, and a Facebook group called Bowe Bergdahl is NOT a hero! has attracted more than 13,000 members.

Its description reads: ‘Bowe Bergdahl has been made out to be a hero, deserving of praise.

‘However, the media and government have lied to the public and covered up the facts.

‘I and many of my former battle buddies have first hand knowledge of what took place on that hill in Afghanistan.

‘We are here. We will be heard. Bergdahl will be held accountable for his actions.’