Israeli Apartheid Debate: The Occupation Doesn’t Have an ‘Image Problem’ 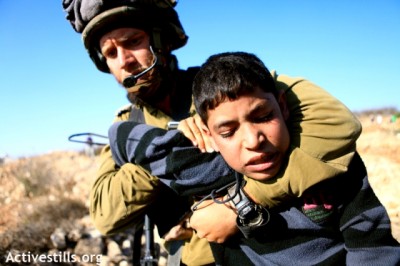 In a January 2014 New York Times op-ed that I somehow just noticed now, a South Africa-born Jew insists that Israel is not an apartheid state. Hirsh Goodman, a journalist and political commentator who immigrated to Israel in 1965, agrees that the occupation must end. Not because it’s evil to deprive a whole nation of its basic civil rights, but because it looks bad.

For Goodman, the problem is not the human rights abuses committed by Israel, but rather that anti-occupation activists, “some of whom have graduated from the best universities in the world,” are waging a campaign to “delegitimize” Israel by using the “buzzword” of apartheid. This is a false label, he asserts, which is sticking because Israel’s enemies are good at propaganda. Then, in a remarkable feat of unawareness, he goes on to make the case that Israel does preside over an apartheid-like system.

In apartheid South Africa, people disappeared in the night without the protection of any legal process and were never heard from again. There was no freedom of speech or expression and more “judicial” hangings were reportedly carried out there than in any other place on earth. There was no free press and, until January 1976, no public television. Masses of black people were forcibly moved from tribal lands to arid Bantustans in the middle of nowhere. A “pass system” stipulated where blacks could live and work, splitting families and breaking down social structures, to provide cheap labor for the mines and white-owned businesses, and a plentiful pool of domestic servants for the white minority. Those found in violation were arrested, usually lashed, and sentenced to stints of hard labor for a few shillings per prisoner per day, payable to the prison service.

None of this even remotely exists in Israel or the occupied territories.

In fact, almost all of these conditions exist in the territories controlled by Israel. Tweak this paragraph a bit, and you have a pretty accurate description of the system over which Israel has presided for 47 years —five years longer than apartheid existed in South Africa. Here’s the Israel-Palestine version:

Masses of Palestinians were forcibly moved from their ancestral lands to arid Bantustans in the middle of nowhere. An opaque permit system stipulates where Palestinians can live and work, splitting families and breaking down social structures, to provide cheap labor for the settlements and Jewish-owned businesses, and a plentiful pool of manual labor for the Jewish minority. Those judged to be in violation, even children as young as 8, are arrested by soldiers, usually beaten, tried in a military court that has a conviction rate of 99 percent and sentenced to stints of jail time for a few shekels per prisoner per day, payable to the prison service.”

Israel has been displacing Palestinians from their ancestral lands since the state was founded. After it conquered the West Bank in 1967, it systematically uprooted Palestinians from their homes there, starting with those who had the bad luck to occupy homes near the Jewish holy sites in Jerusalem’s Old City (Moshe Dayan gave the order to raze those homes, which stood where the plaza leading to the Western Wall is today). Over the past year or so, the army has been in the process of forcibly removing 27,000 Palestinians from their homes in Area C of the West Bank, most of whom have lived in the same place for at least 50 years. The human rights NGO B’Tselem has documented this extensively, as has Haaretz journalist Amira Hass. Soldiers evict the families by force and destroy their homes with bulldozers. Sometimes a whole village is bulldozed, including the local school. No alternative housing or compensation is provided. “Go to Area A or B,” the Palestinians are told. If anyone tries to stop the soldiers or offer aid to the newly homeless families, they are forcibly removed from the scene or arrested. Including EU diplomats.

In Jerusalem neighborhoods like Sheikh Jarrah, settlers protected by court orders and paramilitary police forcibly evict Palestinians from the homes they have lived in for decades, tossing the residents’ belongings on the street and leaving them homeless, with no recourse and nowhere to go. In the Negev, the Israeli government is trying under the Prawer Plan to uproot Bedouin from their ancestral homes, which have been systematically deprived of  amenities, like electricity and running water, that illegal Israeli settlers in the West Bank are granted as a matter of course, and herd them forcibly into urban areas. Paramilitary police have demolished the Bedouin village of al-Araqib several dozen times.

In the West Bank, the Israeli army regularly deploys soldiers to carry out pre-dawn arrests, rousting minor youths from their beds at 3 and 4 o’clock in the morning, as documented in this video (there are dozens of similar videos). The children are cuffed, taken in an army vehicle to a police station, and questioned aggressively, with neither a guardian nor a lawyer present. It is not uncommon for children as young as eight to be arrested by soldiers on suspicion of throwing stones. As this illustration shows, there is a stark disparity in the way Israel’s justice system treats Palestinian children, as compared to Israeli children who live in the same territory. A Palestinian child, for example, can be detained in military prison, an adult facility, for 180 days without being charged.

It’s true that since the separation barrier went up a decade ago, Israelis have largely replaced cheap Palestinian laborers with guest workers from places like the Philippines. But with the Palestinian economy crippled by Israel’s control over its borders and resources, unemployment is sky high and people are desperate for work. Some obtain permits to do construction work on Jewish settlements, enduring the humiliation of building houses for Jews on land that was stolen from them just so they can put food on the table for their children. A very lucky few obtain permits to work in Israel, queuing up like cattle early in the morning to pass through Israel’s military checkpoints. Still others, unable to obtain permits, travel for hours via circuitous routes that circumvent the checkpoints, then sneak through the porous parts of the wall in search of a day’s manual labor. Sometimes, they get shot and killed by border police as they are sneaking in. All for a day’s work that might pay $25 or so.

Meanwhile, Palestinian citizens of Israel (often referred to as “Israeli Arabs”) who marry Palestinians from the occupied territories are prevented by law from obtaining residency or citizenship for their spouses. This means that families are torn apart, just as South African families were sundered by the apartheid policies Goodman describes. The same applies to West Bank Palestinians married to Gaza Palestinians. Israel controls the borders and population movement for both places, and refuses in all but a handful of cases to issue permits that would allow families to live together in one of the two territories.

Fortunately, Israel has a free and lively media that does often report on these violations of Palestinian human rights. But unfortunately, the Israeli public is not sufficiently moved to express vociferous disapproval, as witnessed by the fact that these reports elicit mild protest but never change. In fact, the situation of Palestinians has steadily deteriorated with the years, with more land confiscations and increased limitations on their freedom of movement.

The asylum seekers from countries like Eritrea and Sudan, writes Goodman, should be treated better. Not because helping people who survived desperate journeys across the desert after escaping war and torture is the right thing to do. And not because Israel has a legal obligation as a signatory to the 1951 UN treaty on the treatment and status of refugees. Rather, because jailing these poor souls instead of providing succor results in  ”…reams of footage to those who want to prove Israel is a racist society.” Goodman neglects to mention the racist incitement of members of Knesset like Likud’s Miri Regev, who infamously referred to the African refugees as “a cancer in our bodies.” According to a poll carried out by the Israel Democracy Institute, 51 percent of Israelis agree with Regev. No wonder Israel has a reputation for being a racist country.

But for Goodman, Israel’s policies toward the Palestinians and the asylum seekers are not a problem because they are cruel or deeply unjust. Nope. They’re just bad for hasbara. They make him worry about his image abroad. That is a shockingly immoral perspective. The occupation is not bad because it makes Israel look bad. It’s bad because it’s evil.

Don’t like the term apartheid? Okay. What’s in a name, after all? So here’s the question: Whatdo you call a system by which a colonizing government has controlled 2.5 million people for 47 years, depriving them of their basic civil rights based on their ethnicity?