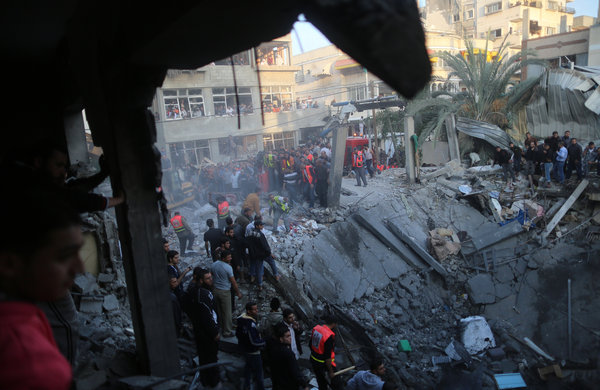 GAZA CITY — An Israeli bomb pummeled a home deep into the ground here Sunday afternoon, killing 11 people, including nine in three generations of a single family, in the deadliest single strike since the cross-border conflict between Israel and the militant faction Hamasescalated on Wednesday.

An Israeli family took cover during a rocket attack near the town of Ashdod in southern Israel.

The airstrike, along with several others that killed civilians across this coastal territory and hit two media offices here — one of them used by Western TV networks — further indicated that Israel was striking a wider range of targets.

Gaza health officials reported that the number of people injured here had nearly doubled to 600 by day’s end; the Palestinian death toll climbed to 70, including 20 children. Three Israelis have been killed and at least 79 wounded by continued rocket fire into southern Israel and as far north as Tel Aviv, as Israeli cities were paralyzed by an onslaught of relentless rocket fire out of Gaza for the fifth straight day.

In the Israeli strike on Sunday morning, it took emergency workers and a Caterpillar digger more than an hour to reveal the extent of the devastation under the two-story home of Jamal Dalu, a shop owner. Mr. Dalu was at a neighbor’s when the blast wiped out nearly his entire family: His sister, wife, two daughters, daughter-in-law and four grandchildren ages 2 to 6 all perished under the rubble, along with two neighbors, an 18-year-old and his grandmother.

“We were asleep and then there was a terrific blast,” said Abdul-Latif Dahman, who lives nearby and was among more than 100 who stood vigil as the bodies were dug out. “There are no words to describe what happened later, only smoke and dust and heavy silence because the sound shut our ears.”

The smell of bomb residue and the roars of bulldozers filled the air as people clambered over shattered glass and bent iron bars to get a closer look. When two tiny bodies were finally found, rescuers and residents erupted in cries of “God is great!” One worker rushed the girl to an ambulance, while a neighbor grabbed the boy and just ran.

Ismail Haniyeh, the prime minister of the militant Hamas faction that rules Gaza, condemned the attack as a “massacre” that “exceeded all expectations.”