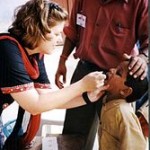 (Reuters) – Israel said on Sunday it was launching a campaign to administer the active polio vaccine to children in its southern region after tests detected at least 1,000 carriers of the virus in that area, though none were found to be ill with the disease.

The Health Ministry said it was recommending that children born after January 2004, but not younger than two months, report to publicly-funded clinics to be administered oral drops of a weakened active virus vaccine beginning on Monday.

…Israel conducted tests after the virus was detected in sewage samples some weeks ago, and subsequent tests by laboratories abroad provided “indications there are between 1,000 to 2,000 carriers of the virus,” Health Minister Yael German said in an interview with Channel 2 television.

While there have been no reported cases of the disease, a decision was made to take protective steps. Israeli media said the target population numbered about 150,000 children.

“The level of immunization in Israel is 98 percent and there are no cases of the disease,” German said. “But the virus exists, for now in the south.”

Just to give everyone a heads up, this is the same oral polio vaccine that exposed almost 100 million people to a cancer virus, SV-40 ; It has also been postulated by author and journalist, Ed Hooper, that the oral polio vaccine made of chimpanzee kidney cells in the Congo caused HIV-1 to be transmittable between humans, although lame attempts have been made by the establishment to discredit his theories.