Astronomers are geeking out over a streaking object called ISON
By Chris Gayomali | January 14, 2013

The Week
Don’t be surprised when you look up this November and see an exceptionally bright object streaking across the night sky. It’ll just be the Comet ISON, a large, luminous space rock that astronomers say has the potential to join 1996’s Comet Hyakutake and 1997’s Hale-Bopp as one of the brightest “Great Comets” in history. Indeed, ISON may go down as the brightest comet ever gazed upon by human eyes. Here’s what you should know:

Why is it called ISON?

Russians Vitali Nevski and Artyom Novichonok are credited with first photographing ISON using a 15.7-inch reflecting telescope of the International Scientific Optical Network, or ISON, when it was still far, far away. Their initial snapshot is dated Sept. 21, 2011.

When will ISON be visible?

Beginning Oct. 14 and 15, ISON will begin to line up with Regulus, a bright blue star in the constellation Leo. By the end of the month, ISON should be visible to anyone with a pair of binoculars and might even be viewable with the naked eye. Over the course of November, the comet will truly come into its own, and should brighten up dramatically as it races toward the sun, where it’s set to begin passing through the inner corona (a.k.a. the super-hot bonnet flaring around the sun) on Nov. 28.

How bright will it be?

It has the potential to go down as the brightest comet ever — and could briefly outshine even the moon. Of course, that’s only if ISON doesn’t shatter into fragments when it comes within 800,000 miles of the sun’s surface. When it does, temperatures inside the comet’s frozen, icy core will quickly shoot up to 2 million degrees Fahrenheit. The effect could be akin to pouring hot tea in a cold glass.

What are ISON’s chances of surviving?
We just don’t know. While some comets, like the Great Comet of 1882, broke into fragments after grazing the sun, others, like the Comet Lovejoy managed to escape the unimaginable solar heat in one piece.

But why will ISON be so bright?
Like the Great Comet of 1680, ISON is on a parabolic orbit, meaning it will scatter light forward as it moves away from the sun.

What’s the best way to see it?
If ISON manages to survive its close encounter with the big fireball at the center of our solar system, the comet should be visible both day and night, for most of December 2013. At the very least, it will be about as bright as Venus and sport a spectacular tail stretching out tens of millions of miles. In fact, Earth is even expected to pass through this tail on Jan. 14-15, 2014, which may result in a large, dazzling meteor shower. Astronomers, both professional and amateur, are excited in any case, as ISON’s passing could truly be “a once-in-a-civilization’s-lifetime event.”

According to Spacedaily.com, NASA scientists, using data from two ground-based telescopes as well as the Goldstone Solar System Radar, have concluded that the asteroid Apophis will not hit the Earth in either 2029 or 2036.

An examination of old observation data from the Magdalena Ridge at the New Mexico Institute of Mining and Technology and the Pan-STARRS at the Univ. of Hawaii optical observatories has already ruled out a strike by Apophis during the 2029 close approach. Now the same data, according to Spacedaily.com, has allowed scientists to rule out a collision occurring during the 2036 approach as well. Thus NASA, which spent much of 2012 debunking the Mayan Apocalypse, has now ruled out an end of the world more based on actual science.

2029 approach to be one of the closest in history

According to NASA’s Jet Propulsion Laboratory, Apophis was discovered by R. A. Tucker, D. J. Tholen and F. Bernardi at the Kitt Peak observatory. The name, given in 2005, is after an Egyptian god associated with destruction. Based on observations conducted by the European Space Agency’s Herschel telescope during Apophis’s most recent encounter with Earth on Wednesday, the asteroid is estimated to be 325 meters in diameter. NASA estimates that should a collision were to occur, the resulting explosion would be in the plus-500-megaton range.

The perfect solar storm? Sun eruptions to peak in 2013 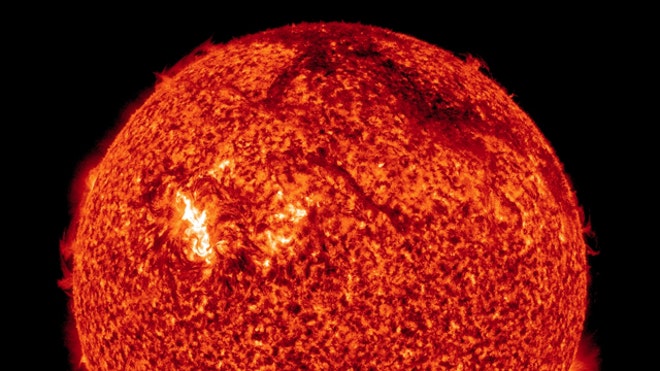 Sunny, with a mild chance of catastrophe?

A massive solar storm, like the one that knocked out radio communications all over the U.S. in 1958, is coming, and this time the devastation could total as much as $2 trillion, experts told FoxNews.com. Call it the perfect solar storm.

Wireless networks that power Blackberrys and iPhones here on earth, as well as GPS satellites that help pilots navigate planes in the skies, could be blacked out. And electric grids that power neighborhoods and whole cities could temporarily go down, said Professor Jose Lopez, a physicist at Seton Hall University.

“The concern of a strong solar flare in the direction of Earth is legit. The possibility that such a Sun burst could hit Earth could cause extensive damage as it would charge-up our electrical equipment and destroy them,” Lopez told FoxNews.com.

What starts as a multimillion-degree blast of fire from the sun cools over the vast distances of space. But what remains is a wave of energy that leaves satellites “highly charged” and damages components with its high current. Electronics are also damaged by high-energy particles that penetrate them and interfere with transmissions, as are electronics on Earth.