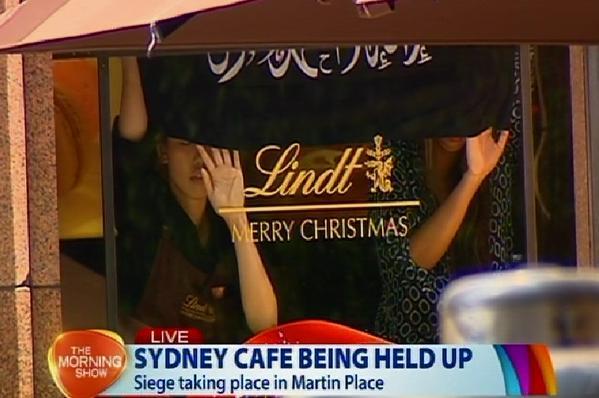 Lindt boss confirms that there are 50 hostages inside the building.

PM Abbott is due to speak in approximately 5 minutes

Bomb squad have now arrived at the cafe

@campricenews says NSW Parliament has been put into lockdown.

Reports that there are several attackers in cafe, middle aged man with ‘Islamic’ headband appears to be ordering others (not hostages) around.

@SkyNewsAust: #BREAKING: unconfirmed reports contact has been made to a Sydney radio station

Reports that one of the staff workers from the cafe in Sydney is being used as a human shield.

Writing on flag being held against Lindt cafe window is known as the Shahada, it translates as ‘There is no god but the God, Muhammad is the messenger of the God’ and is used by several groups e.g. The Caucasus Emirate and the al-Nusra front.

@rConflictNews: #Breaking: Unconfirmed reports that the gunman in #Sydney has a ‘backpack and vest’

@mentalgellarr: Apparently one of the gunmen has told police he has devices all over the city and wants to speak to the Prime Minister live on radio #Sydney

This looks like a multi-pronged attack if whats going on at the Sydney Opera House is connected.  This reminds me of what happened in Canada last month or so ago. Stay tuned I will update