Meteorite fragments rain down on Russia: 1100 injuries reported; force of an atomic bomb 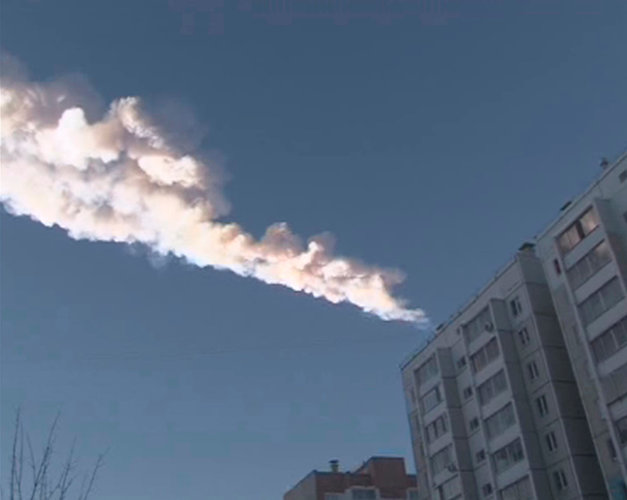 Large fireball blazes a trail through the sky over Russia. The trail of a falling object is seen above an apartment block in Chelyabinsk, Russia, on Friday in an image taken from video.

February 15, 2013 – SIBERIA – Bright objects, tentatively identified as fragments of a meteorite, streaked through the sky in western Siberia early on Friday, accompanied by a boom that damaged buildings across a vast swath of territory. Around 500 people were reported to have been injured, most from breaking glass. Emergency officials had reported no deaths by Friday afternoon but said that 14 people had been hospitalized. Yelena Smirnykh, a spokeswoman for the Ministry of Emergency Situations, told Ekho Moskvy radio that she believed the meteorite broke apart and fell in several places. Another government expert, who spoke to Moscow FM radio station, said he believed it may have been a bolide, a type of fireball meteor that explodes in the earth’s atmosphere because of its composition or angle of entry and can be observed from the ground. However, the governor of the Chelyabinsk district reported that a search team had found an impact crater on the outskirts of a city about 50 miles west of Chelyabinsk, which would indicate the meteor did not explode in the atmosphere. An official from the Interior Ministry told Interfax that three large pieces of meteorite debris had been retrieved in the area and that 10,000 police officers are searching for more. A small asteroid, known as 2012 DA14, is expected to pass close to earth later on Friday, NASA reported on its Web site. It was not clear whether the meteorite event in the Ural Mountains was in anyway related. Video clips from the city of Chelyabinsk showed an early morning sky illuminated by a brilliant flash, followed by the sound of breaking glass and multiple car alarms. Meteorites typically cause sonic booms as they enter the earth’s atmosphere. On Friday, the force was powerful enough to shatter dishes and televisions in people’s homes. “I saw a flash in the window, turned toward it and saw a burning cloud, which was surrounded by smoke and was going downward – it reminded me of what you see after an explosion,” said Maria Polyakova, 25, head of reception at the Park-City Hotel in Chelyabinsk, which is 950 miles east of Moscow. A video made outside a building in Chelyabinsk captured the astonished voices of witnesses who were uncertain what it was they had just seen. “Maybe it was a rocket,” said one man, who rushed outside onto the street along with his co-workers when the object hit, far out of sight. A man named Artyom, who spoke to the Moscow FM radio station, said the explosion was enormous. “I was sitting at work and the windows lit up and it was as if the whole city was illuminated, and I looked out and saw a huge streak in the sky and it was like that for two or three minutes and then I heard these noises, like claps,” he said. “And then all the dogs started barking.” He said that there was a blast that caused balconies to shake and windows to shatter. He said he did not believe it was a meteorite. “We are waiting for a second piece, that is what people are talking about now,” he said. There were reports that falling objects were visible as far away as Yekaterinburg, 125 miles southeast of Chelyabinsk. The government response on Friday was huge. Seven airplanes were deployed to search for places where meteorites might have fallen and more than 20,000 people dispatched to comb the area on foot, according to the Ministry of Emergency Situations. There were also 28 sites designated to monitor radiation. No unusual readings had been detected, the ministry reported. The area around Chelyabinsk is also home to “dozens of defense factories, including nuclear factories and those involved in production of thermonuclear weapons,” said Vladimir Lipunov, an astrophysicist at the Shternberg State Astronomy Institute. –NY Times 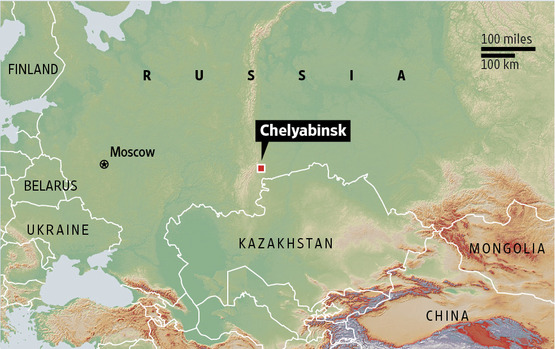 Force of an atomic bomb: A meteor streaked through the sky and exploded Friday over Russia’s Ural Mountains with the power of an atomic bomb, its sonic blasts shattering countless windows and injuring more than 750 people. The spectacle deeply frightened thousands, with some elderly women declaring the world was coming to an end. The meteor — estimated to be about 10 tons — entered the Earth’s atmosphere at a hypersonic speed of at least 54,000 kph (33,000 mph) and shattered about 30-50 kilometers (18-32 miles) above the ground, the Russian Academy of Sciences said in a statement. It released the energy of several kilotons above the Chelyabinsk region, the academy said. Amateur video broadcast on Russian television showed an object speeding across the sky about 9:20 a.m. local time, just after sunrise, leaving a thick white contrail and an intense flash. “There was panic. People had no idea what was happening. Everyone was going around to people’s houses to check if they were OK,” said Sergey Hametov, a resident of Chelyabinsk, a city of 1 million about 1,500 kilometers (930 miles) east of Moscow. “We saw a big burst of light, then went outside to see what it was and we heard a really loud thundering sound,” he told The Associated Press by telephone. The explosions broke an estimated 100,000 square meters (more than 1 million square feet) of glass, city officials said. The city administration said 758 people sought medical care after the explosions and most were injured by shards of glass. Athletes at a city sports arena were among those cut up by the flying glass. It was not immediately clear if any people were struck by space fragments. Another Chelyabinsk resident, Valya Kazakov, said some elderly women in his neighborhood started crying out that the world was ending. City officials said 3,000 buildings in the city were damaged by the shock wave, including a zinc factory where part of the roof collapsed.

“My heart is still beating 200 heartbeats a minute! … I saw this terrible flash, it was red-orange! My eyes are still hurting,” a witness from Chelyabinsk wrote on a local web forum. “I turned off all the lights, sat the kids on a couch and waited… Oh, my God, I thought the war had begun.” – Eyewitness

Asteroid may be shaken by seismic quakes, as it zips by Earth

February 15, 2013 – SPACE – An asteroid which is to hurtle close to the Earth tomorrow may experience a seismic jolt as it passes through our planet’s gravitational field, scientists suggest. The 45m asteroid, named 2012 DA14, will fly by at 7.8 km/s at a distance of just 27,000 km from Earth. It will be visible in New Zealand skies from about 2.30am (although not with a naked eye), but will make its closest approach to the Earth about 8.25am. It is forecast to be the closest recorded asteroid, passing well inside the geostationary ring, where many communication satellites are located. While Earth has experienced many tremors from asteroids striking our planet, new research by Richard Binzel, a professor of planetary science at the Massachusettes Institute of Technology, suggests many near-Earth asteroids experience a seismic jolt when they pass too close to our planet’s gravitational field. “We are going to be looking closely for evidence of seismic activity on 2014 DA14 as it passes by,” Binzel said. “This is the first case of an object coming close enough to experience quakes and where we have enough notice to plan observations.” The idea of asteroid-quakes came to Binzel when he was pondering a mystery about “space-weathered” asteroids. “As asteroids move through space, they slowly turn dark-red. This phenomenon, called ‘space weathering,’ is caused by long exposure to cosmic rays and solar radiation. For decades, however, we have known about a handful of small asteroids that looked light and fresh; they were not space weathered.” Calculating the orbits of the non-weathered asteroids, Binzel and colleagues discovered they had all had close encounters with Earth in the past million years. “We believe they were ‘shaken up’ by their encounters with Earth,” he said. “Gravitational forces during the flybys can stretch, rattle, and torque these asteroids, causing dark, space-weathered material on the surface to be overturned, revealing the fresh stuff underneath.” Unlike on Earth, there is no Richter scale for asteroids. Instead, Binzel measures the force of the quakes in units of gravitational acceleration, or gees. “These asteroids experience [seismic activity] in the milli- to micro-g range,” Binzel said. “That might not sound like much, but remember these are small bodies. Gravity is not very strong, so just a little shaking or stretching goes a long way.” Binzel believed an asteroid floating beside an asteroid experiencing such a quake would see the surface “slowly sway or rock by a few centimeters. Other things to look for would be puffs of asteroid-dust rising from the surface and gentle avalanches on the steepest slopes of craters.” MIT post-doctorate Nick Moskovitz, who works with Binzel, is coordinating observations with worldwide observatories, including New Zealand’s Mt John Observatory, to determine the colour spin, shape, and reflectivity of 2012 DA14 as it passes by. Changes in any of these quantities might be a sign of a quake. “We stand to learn a lot from the observations,” Binzel said.