Is the US Empire out of the Globalists Agenda? 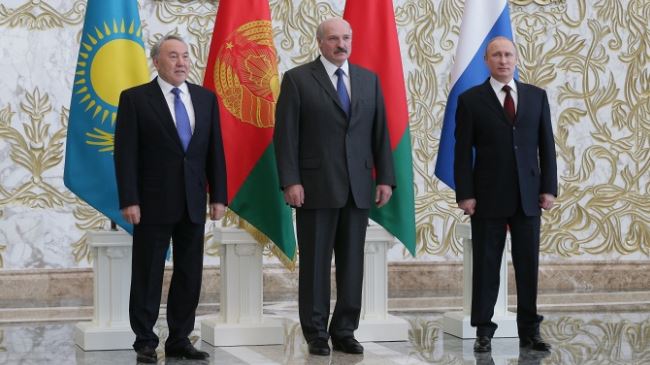 The economic union signed this week between Russia and its near neighbors, Belarus and Kazakhstan, spells another nail in the coffin of the waning US global hegemony.

Russian President Vladimir Putin signed off on the Eurasian Economic Union in the Kazakh capital, Astana, along with his counterparts, Alexander Lukashenko and Nursultan Nazarbayev.

There was evident, sincere camaraderie between the three leaders. Putin called the new union a “landmark of historic significance” while the Kazakh leader Nazarbayev declared “a new geopolitical reality of the 21st century is born.”

This is no exaggeration. The Eurasian Economic Union (EEU), which comes into effect in January 2015, is another sign of the paradigm shift in the global economy and international relations. This shift heralds the rise of the European-Asian axis and the further demise of the crumbling US-dominated West.

The signing of the EEU this week follows the strategic energy partnership between Russia and China that came into being last week. The latter entails the coupling of the world’s biggest oil and gas producer with the globe’s largest market.

Of crucial importance, these Eastern alignments integrate not just energy, but wider aspects of trade, finance and military alliance. Moreover, the gradual integration is outside the US dollar system and thus will greatly undermine the long-abused American hegemony over the rest of the world.

The Eurasian pivot in world affairs embodied by the signing in Astana this week is not an isolated moment. It represents a dynamic of huge re-orientation, away from the US-dominated West.

Other countries that are aiming to join the EEU include the former Soviet states of Armenia, Tajikistan, Uzbekistan and Kyrgyzstan. In a few years’ time, it is not difficult to foresee how this oil and gas-rich region could evolve into a new energy bloc that would eventually oust the Saudi-dominated OPEC cartel. OPEC is a lynchpin in the US dollar monopoly over international trade.

As President Putin noted this week, Russia, Belarus and Kazakhstan constitute 20 and 15 per cent of the world’s gas and oil reserves. That strategic importance will only grow ever more, with the likely addition of other neighboring states to the EEU.

This Eurasian alliance could also in the near future include other energy giants, such as Iran and Azerbaijan. All these countries share common cultural heritages and they share common political and philosophical values of mutual respect for each other’s nations. This broad alliance is a natural development and one that eclipses the waning Western hegemony that is based on exploitation, deceit, treacherous subversion, militarism and the outrageous dollar racket.

The Eurasian Economic Alliance born this week has been three years in the making ever since Russia, Belarus and Kazakhstan first began the Customs Union process at the end of 2011. The political vision behind the project is totally different from the failing European Union or the Washington-led capitalist West, both of which serve elite profiteering and not the mass of people.

The EEA is based on mutual sovereignty and a genuine partnership to develop economies and societies along democratic principles, led by governments that are committed to serve the good of their people – as opposed to the Western servility to an elite financial oligarchy. The EEA is a government-planned management of agriculture, commerce, energy, labor and capital to serve the interests of social development and the needs of the real economy.

This is why, of course, Washington is quaking-scared about the kind of strategic union forming between Russia and its neighbors.

Without any credible rationale, Washington is claiming that Putin is trying to revive the old Soviet Union. Why that should be particularly objectionable is not explained by the Americans. And anyway, who is Washington to presume to speak for the countries of Eurasia? If the latter want to join with Russia, that is their own business over their sovereign affairs. But the exceptionally arrogant Washington does not understand or deserve democratic respect.

In December 2012, then Secretary of State Hillary Clinton said of the proposed EEU, “It’s not going to be called that [USSR]. It’s going to be called customs union, it will be called the Eurasian union and all of that, but let’s make no mistake about it. We know what the goal is and we are trying to figure out effective ways to slow down or prevent it.”

Well, the American rulers are still trying to figure out effective ways of preventing the new realignment in global relations. The current US state-sponsored terrorism in Syria and Ukraine are part of this nefarious effort of sabotaging. But Washington will find that it is not just swimming against the tide of history; it is drowning.

The Eurasian Economic Union signed this week is another nail in Washington’s coffin as it sinks inexorably to a watery grave. Good riddance.