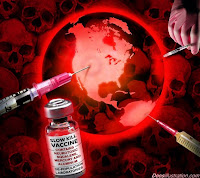 But surgery is not necessary to sterilize. During WWII, the Nazis experimented on people at Auschwitz to develop vaccines that sterilize at routine doctor’s appointments under the guise of medical treatment.

In July 1942 Lieutenant General Rudolf Brandt, Himmler’s personal advisor (Strzelecka 1996), contacted Clauberg, asking on behalf of Himmler, [how long it would take] to sterilize 1000 Jewesses. The Jewesses themselves should not know anything about it. As the SS Reich Leader [Himmler] understands it, you could give the appropriate injection during a general examination.

This use of vaccines to sterilize continued beyond WWII, including under the aegis of WHO, where the intent was hidden.

… since the 1920s the Rockefeller Foundation had funded the eugenics research in Germany through the Kaiser-Wilhelm Institutes in Berlin and Munich, including well into the Third Reich. They praised the forced sterilization of people by Hitler Germany, and the Nazi ideas on race “purity.” It was John D. Rockefeller III, a life-long advocate of eugenics, who used his “tax free” foundation money to initiate the population reduction neo-Malthusian movement through his private Population Council in New York beginning in the 1950s.

Some chronology of government involvement in eugenics after WWII, dates highlighted:

From Eugenics and the Nazis — the California Connection by Edwin Black

California led the nation, performing nearly all sterilization procedures with little or no due process. In its first 25 years of eugenics legislation, California sterilized 9,782 individuals, mostly women. Many were classified as ‘bad girls,’ diagnosed as ‘passionate,’ ‘oversexed’ or ‘sexually wayward.’ At the Sonoma State Home, some women were sterilized because of what was deemed an abnormally large clitoris or labia.

Even the U.S. Supreme Court endorsed aspects of eugenics. In its infamous 1927 decision, Supreme Court Justice Oliver Wendell Holmes wrote, ‘It is better for all the world, if instead of waiting to execute degenerate offspring for crime, or to let them starve for their imbecility, society can prevent those who are manifestly unfit from continuing their kind . . . Three generations of imbeciles are enough.’ This decision opened the floodgates for thousands to be coercively sterilized or otherwise persecuted as subhuman.

In 1967 the American Public Health Association and the American College of Obstetricians and Gynecologists conducted a study and found that 54 percent of the teaching hospitals nation-wide “… made sterilization a requirement for winning approval for an abortion” (Weisbord, 1975: 155). A Look at the Indian Health Service Policy of Sterilization, 1972-1976 by Charles R. England

Engdahl continues about Bill Gates and the WHO and sterilization by vaccine:

The idea of using vaccines to covertly reduce births in the Third World is also not new. Bill Gates’ good friend, David Rockefeller and his Rockefeller Foundation were involved as early as 1972 in a major project together with WHO and others to perfect another “new vaccine.

The results of the WHO-Rockefeller project were put into mass application on human guinea pigs in the early 1990s. The WHO oversaw massive vaccination campaigns against tetanus in Nicaragua, Mexico and the Philippines. Comite Pro Vida de Mexico, a Roman Catholic lay organization, became suspicious of the motives behind the WHO program and decided to test numerous vials of the vaccine and found them to contain human Chorionic Gonadotrophin, or hCG. That was a curious component for a vaccine designed to protect people against lock-jaw arising from infection with rusty nail wounds or other contact with certain bacteria found in soil. The tetanus disease was indeed, also rather rare. It was also curious because hCG was a natural hormone needed to maintain a pregnancy. However, when combined with a tetanus toxoid carrier, it stimulated formation of antibodies against hCG, rendering a woman incapable of maintaining a pregnancy, a form of concealed abortion. Similar reports of vaccines laced with hCG hormones came from the Philippines and Nicaragua.

This 1974 memorandum drafted by Henry Kissinger led directly to the unleashing of experimental vaccines on the unsuspecting public. It sighted countries as targets for ‘initial population reduction experimentation to be implemented around the year 2000’. They identified India, Bangladesh, Pakistan, Nigeria, Mexico, Indonesia, Brazil, Philippines, Thailand, Egypt, Turkey, Ethiopia & Columbia for study. 3 million Filipinos ages 12-48 were given a test vaccine that ruined their health. North American Black & Native American Women were each given the same vaccine resulting in sterility rates of 25% & 35% respectively. The directive came from the WHO and was directly tied to Kissinger’s report. [Emphasis added.]

George Bush between 2000 and 2008 politicized and undermined the US science agencies, including the CDC which is closely tied to the vaccine manufacturers. Robert Kennedy Jr. wrote about the Junk Science created because of Bush.

As a favor to utility and coal industries, America’s largest mercury dischargers, the EPA sat for nine months on a report exposing the catastrophic impact on children’s health of mercury, finally releasing it in February 2003. Among the findings of the report: The bloodstream of one in twelve US women is saturated with enough mercury to cause neurological damage, permanent IQ loss and a grim inventory of other diseases in their unborn children.

The CDC has been lying since 2001 about the relation between mercury and autism, “reporting” that mercury in vaccines has no impact on children. There is mercury in the flu vaccines and some of the mandated vaccines for American children (who get 2-3 times more vaccines than any other children in the world). The CDC has known for over a decade that there was a connection between mercury and autism and FOIAs show that the CDC colluded in covering up the link between autism and mercury.

In the final draft version of the publication submitted to Pediatrics, the data from 2001 showing a decline in autism was not mentioned. Ignoring this omission, the CDC continued to endorse the article and, in a December 10, 2002 recommendation letter to the editor of Pediatrics, encouraged expedited review and publication of the article. The misleading Danish article was published by Pediatrics in 2003.

Dr. Poul Thorsen, one of the co-authors and ‘scientist in residence’ at the CDC 2000-2002, subsequently was terminated by Aarhus University and indicted in Atlanta for embezzlement this year in relation to his $11 million grant from the CDC.”

Though it must legally respond to within 20 days to FOIA (Freedom of Information Act) requests, the CDC – after almost 7 years of not responding requests concerning vaccines from a doctor with an autistic son – was ordered on September 30, 2011 by federal judge to release FOIA documents concerning vaccines. Within less than a month, the Obama administration was criticized by the Denver Post wrote an editorial not realizing the order the CDC had just gotten.

It’s profoundly disappointing to see the Obama administration proposing changes to FOIA that would allow federal agencies to lie about the very existence of information being sought.

That’s not progress, and it’s certainly not transparency, a principle the president has repeatedly and publicly pledged allegiance to.

The worst among [the proposed changes], in our estimation, is the proposed change that would allow the government to tell those requesting information under FOIA that the material does not exist when, in fact, it does.

Moving from a Glomar denial to outright deceit would have even broader ramifications if the person denied information were to decide to take the matter to court.

In that case, would the government be in a position of lying to the court about the existence of information?

If agencies are exercising legally allowable exceptions to the law and withholding certain records, they can just continue to do as they do today: neither confirm nor deny the information’s existence….

This is all the more relevant since FOIAs in the UK, released in March of this year, reveal a 30-year cover-up of the government’s knowledge that vaccines don’t work, cause the diseases they are claimed to prevent, and that the government had done all possible to block safety studies and colluded in lying to the public about vaccines’ safety and efficacy. (Source)