Mossad and Australian spies: how Fairfax reporter homed in on Zygier 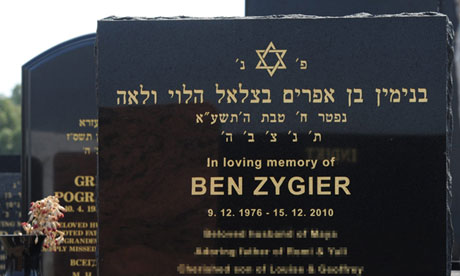 For Jason Katsoukis, the Australian journalist who first investigated allegations that Ben Zygier was a Mossad agent, the claims initially sounded “outlandish”.

In 2009, while living in Jerusalem and filing stories to the Australian Fairfax group, Katsoukis was contacted by an anonymous source with connections to the intelligence world.

The story that the source told over a series of conversations was indeed extraordinary.

The source named three Australians with joint Israeli citizenship whom, he said, were working for a front company set up by Mossad in Europe selling electronic equipment to Iran and elsewhere.

“I was tipped off in October 2009,” Katsoukis told the Guardian on Wednesday, recalling the events that would lead to his calling Zygier at his home in Jerusalem and accusing him of being an Israeli spy.

“The story was that Mossad was recruiting Australians to spy for them using a front company in Europe. It all seemed too good to be true.

“But what I was told seemed to check out. The company did exist. I also managed to establish that Zygier and another of the individuals had worked for it. I wasn’t able to confirm the third name.

“I was told too that the Australian authorities were closing in on Zygier and that he might even be arrested.

“There was other stuff about Zygier. In Australia you can change your name once a year. He’d done it four times I think, but they were beginning to get suspicious. I also found out that he had applied for a work visa for Italy in Melbourne.”

The repeated changes of name would have allowed Zygier to create new identities and multiple passports.

While Katsoukis was working on the story – still uncertain if it stacked up – something happened that encouraged both his editors and Katsoukis himself to bring forward their contact with Zygier.

It emerged that the team had been supplied with false passports from a number of countries including Germany, Ireland and the UK, apparently confirming the very practice Katsoukis was investigating.

The name of the Australian, who in 2010 committed suicide in a secret Israeli prison cell, has been released. He was identified as Ben Zygier, a Mossad agent originally from Melbourne who took the Hebrew name of Ben Alon. He was held in solitary confinement in a top security cell. His story has been withheld under a strict Israeli gag order.

Australian foreign minister Bob Carr has ordered a new investigation into Canberra’s conduct in the affair, his spokesman said early Wednesday, after it emerged that Israeli authorities told a diplomat at the Australian Embassy in Tel Aviv about the arrest of Australian citizen Ben Zygier. But the diplomat never relayed the information to Canberra through the conventional channels.

Israeli MPs and commentators were on Wednesday asking tough questions about the mysterious detention and apparent suicide of “Prisoner X” after a TV report said he was an Australian Jew with ties to Mossad.

Twenty-four hours after the emergence of an explosive investigative report by Australia’s ABC news, the Israeli censor moved to ease the total blackout on coverage of the incident, allowing the local press to publish details from the report.

The story of the so-called Prisoner X first emerged in June 2010 when Israel’s Ynet news website briefly ran a story about a prisoner being held in top secret conditions whose identity and crime was not even known to his jailers.

The story was quickly taken offline and a complete media blackout was imposed, but it reemerged on Tuesday when ABC identified the mystery prisoner as an Australian national who had been recruited by Israel’s shadowy spy agency.

With tight reporting restrictions in place, the Israeli media was completely silent on the affair.

What they did report was that Prime Minister Benjamin Netanyahu had on Tuesday called an urgent meeting with the country’s top editors to ask them to cooperate by “withholding publication of information pertaining to an incident that is very embarrassing to a certain government agency,” Haaretz newspaper said, in a clear allusion to Mossad.

But shortly afterwards, three MPs raised questions over the issue in parliament, effectively sidestepping the censor in a move which forced a slight easing of the reporting restrictions.

In its report, ABC named the prisoner as 34-year-old Ben Zygier, a Jewish lawyer from Melbourne who moved to Israel in 2001 where he was known as Ben Alon.

It said he was working for Mossad, and that his arrest and incarceration was one of the most sensitive secrets of Israel’s intelligence community.

Before he was arrested in early 2010, Zygier had been living in Israel for about 10 years and was married to an Israeli woman with whom he had two children, the channel said.

ABC had no information on why he was arrested but said he was taken to Ayalon Prison near Tel Aviv where he was held in virtual isolation.

In December of that year, Zygier was found hanged in his cell, despite the fact it was equipped with state-of-the-art surveillance systems to prevent suicide, it said.

Ben Zygier, Australian citizen and Mossad agent, was not the first Prisoner X to be held secretly in an Israeli jail. Double agents caught after turning traitor or crossing the lines into crime for personal motives are the exception – but not unknown in most spy agencies. In the 1950s, Israeli agent Mordecai (Mottele) Kedar was secretly incarcerated for many years for betraying his mission.

The Australian ABC went to great lengths to uncover the story of the Israeli-Australian double citizen, aka Ben Alon, who committed suicide on Dec. 15, 2010 at the age of 34 in a top-security cell of Ayalon Prison where he was held in solitary confinement. A former inmate of that cell is said to have been Yitzhak Rabin’s assassin Yigal Amir.

After a longstanding Israeli gag order, his name was finally released for publication Wednesday, Feb. 13.

According to ABC, after his death, his body was flown to Melbourne, Australia, where his family, active in the local Jewish community, buried him one week later. The headstone on his grave bears his name and the dates of his birth and death. The ABC investigation disclosed that an autopsy was conducted by the Israeli Forensic Institute which issued a death certificate listing the cause of death as asphyxiation by hanging in the name of Ben Alon. Also found was a second Australian passport in the name of Ben Allen.

An Israeli organization called ZAKA, religious volunteers known for recovering the remains of Jewish terrorism victims, arranged for the body to be flown to Melbourne.
ABC reporters left no stone unturned to discover the reason for the extraordinary cover-up by the Israeli government. Was this a matter of national security? And what did the Australian authorities know? When Ben Zygier died in that prison what questions were asked by Australian diplomats and what were they told? And, finally, how did he manage to kill himself in a top-security cell under constant surveillance?

A senior Israeli intelligence official, who remained anonymous, told Australian TV that if what Ben Zygier did and knew were made public, it would pose an immediate threat to Israel as a nation state.

International protocols demand that when a foreign national is jailed or dies, their diplomatic mission must be informed. The Australian new investigators assumed that whatever crime or sin Ben Zygier committed, it must have involved espionage, possibly treachery, and very, very sensitive information endangering Israel.
Still, despite their best professional efforts, ABC’s reporters did not find a single lead to the mysterious story of Prisoner X or verify any wild conjectures. One tied him to various episodes in which Israeli Mossad undercover agents were found operating on Australian passports; another, to the Iranian defector, Gen. Ali Ashgari, who disappeared from his hotel in Istanbul with suitcases full of Iranian nuclear secrets.

They were only able to establish that Ben Zygier was a lawyer by profession.

One of the many questions still open is how was he able to commit suicide? Warren Reed, a former Australian secret service agent, disclosed that not only are cameras installed in this type of cell, but sensors which measure the inmate’s heart, respiration and perspiration rates. How did his watchers fail to notice that he had stopped breathing and his heart was no longer beating?

One possible answer is that in the Mossad training courses he underwent, he was taught how to take his own life under the noses of his captors, and used this method to kill himself.
Early Wednesday, the Australian Foreign Ministry spokesman said that the minister, Bob Carr, had ordered a new investigation into Canberra’s conduct in the affair, after it emerged that Israeli authorities had told a diplomat at the Australian Embassy in Tel Aviv about the arrest of Australian citizen Ben Zygier. But the diplomat never relayed the information to Canberra through the conventional channels, he said.

debkafile: “Conventional channels” is a term used in inter-governmental intelligence relations. Its use may indicate that the Tel Aviv embassy passed the Israeli notice to the Australian spy agency – not the “conventional channels” of the foreign ministry.
This comment opens up more suggestive enigmas: Who was Ben Zygier, or Ben Allen, working for? Was it the Israeli Mossad or Australian intelligence – or both?

In any case, the Australian authorities may have had their own reasons for cooperating in the tight information clampdown imposed by Israel on the Ben Zygier affair.

More unconfirmed data about the career of Mossad agent Ben Zygier, aka Ben Alon, who committed suicide in an Israeli cell, is offered by THEAGE Wednesday. This Australian news site adds a third name, Benjamin Burrows, to his aliases and claims that while studying for an MBA at Monash University in Melbourne in 2009 (a year before his death), he was seen often talking to Iranian and Saudi students. Australian intelligence is said to have known that he traveled to Iran, Syria and Lebanon. When challenged with this information by an Australian journalist in early 2010, Zygier is described as angrily denying he was a spy.

Arab Knesset Member Ahmed Tibi and left-wing Meretz leader Zahava Gal-On both put questions to Justice Minister Yaakov Neeman Tuesday about a so-called “Australian” said to have committed suicide in an Israeli jail.
Tibi: It is reported that a prisoner of Australian nationality committed suicide in an Israel jail under an identity that was not his own. Do you know about this case? Can you confirm this information?

MK Gal-On: Mr. Minister, I would like to hear your views on the fact that journalists are voluntarily censoring information at the request of the authorities. Do you think it appropriate for the Prime Minister’s Office to invite newspaper editors [for a meeting] to keep an affair potentially embarrassing to the government from being published? Are secret detentions possible in Israel on security grounds? In a previous episode, the Supreme Court ruled in response to my petition that secret detentions are absolutely prohibited in the state of Israel.
The Justice Minister replied that he was not in charge of the prison service and members should refer their questions to the Minister of Internal Security.
DEBKAfile: A court gag order bans publication of the “Australian case” by Israeli media, although it is widely covered in foreign and Arab publications. The two lawmakers took advantage of their immunity to cautiously open the case to the public.