Illinois is One Step Closer to Total Gun Ban

Late Wednesday night, a special panel of the Illinois State Senate passed the bill, and has sent it to the Senate floor to be voted on, bringing the state one step closer to a ban on “assault” weapons.

The vote will most likely take place today, January 3.

Representatives from the NRA were present to plead their cases.

“I don’t understand why certainly the only ones who think their lives and their families, like the mayor and governor, are worthy of armed guard protection 24-7, yet now they want to dictate the terms and conditions I or my family use to protect ourselves when I have gang members living down the block in the suburbs,” said NRA lobbyist Todd Vandermyde.

The lobbyists were treated with scorn and condescension. Sen. Antonio Munoz (D-Chicago) told Vandermyde, “You don’t hunt with a 50-caliber weapon, my friend.”

Notorious gun grabber Chicago Mayor Rahm Emanuel must be rubbing his hands together in glee. He released a statement endorsing the measure.

“I urge the full Senate to follow the committee’s lead and quickly pass this important legislation.”

Chicago, the city with the most un-Constitutional gun laws in the United States, stands as evidence that gun bans don’t work.

The city won the dubious crown of “the murder capitol of the United States” this summer as it exceeded 500 murders.

Delivered by The Daily Sheeple

In response to the Sandy Hook school shooting massacre the Illinois state house has proposed legislation to not only ban guns but criminalize the owners as well. The only problem with the bill or bills is that the Illinois state house is governed by the state Constitution that has been “adopted at special election on December 15, 1970,” which means that a more modern Constitution that governs the state of Illinois and it’s legislature has the right to “keep and bear arms”.

“HB 815 amendment 1 & 2 and HB 1263 amendments 5 & 6 were passed out of the Illinois Senate Public Health Committee last night, advancing to the full Senate floor for a debate and possible approval later today,” according to Infowars.com.

HB 815 Amendments 1 & 2 and HB 1263 Amendments 5 & 6 that have any provisions to ban firearms which also defines guns, semi-autos, and even the term weapons that can fire bullets are all considered arms which is protected under the 1970 December 15 ratified State Constitution of Illinois. That means in the event that any officials inside the state that engage in confiscation of peoples legally registered and owned firearms, they have a right to know the names of the officers that confiscated the firearms and then file a lawsuit with the county district state courthouse that the firearms being confiscated due to a state law banning his/her firearms is in violation of Section 22 Article I of the Illinois State Constitution adopted and ratified on December 15, 1970. You can read the Amendment for yourself at ilga.gov (Illinois General Assembly website) with the quotes “Section 22. Right to Arms,” stating that “Subject only to police power, the right of the individual citizen to keep and bear arms shall not be infringed.”

Also with local police, the local municipal police departments are created by the town and city governments which are created by municipal corporation created charters, in other words a town or city Constitution per se, which are local laws that are passed by both houses of the state which allows a town or city to be officially registered with the state government and subject to the state Constitution. That means town and city charters are subject to the laws of the state and regulated in accordance to charter laws. City and Town governments are municipal corporate entities and are also considered a legal body politic which are all legal lawyer terms but nevertheless means that all state police and even local authorities are all subject to the state Constitution and that Federal police forces are subject to the US Constitution. The thing is the US Federal Constitution has the 2nd Amendment so any attempt to confiscate or even charge individuals that own firearms are in violation of the 2nd Amendment. Any state police and local law enforcement and even State Bureau of Investigation (SBI) agents that attempt to use force to confiscate firearms and criminalize individuals for their firearms is in direct violation and infringement of Article I Section 22 of the Illusion State Constitution. Since all laws which are repugnant to the Constitution are void, Marbury Vs. Madison (1803) and thousands of other federal and also state rulings for example, any state or even local laws which are ordinances passed by state registered political entities subject to the State Constitution, if any state or local laws are passed infringing upon the right to keep and bear arms then those laws are invalid as if the law never existed. If a police officer enforces a law he/she knows to be invalid then they may be subject to a state lawsuit at the county or even superior court since the police have no legal subject matter jurisdiction in order to take someones firearms and would be considered theft of someones legal and protected private property. The firearms owner cannot just only be released from imprisonment for legal firearm ownership protected by the state Constitution but can sue the state government and town or city municipal corporation entities for using the color of law or charter registered by the state to illegally and unconstitutionally seize a individuals firearm ownership.

According to multiple reports, including an alert from the Illinois State Rifle Association, the Illinois legislature is set to introduce a draconian gun control bill that would move to outlaw almost all modern firearms in the state.

The exact text of the bill is unknown at this time, but if reports are accurate, it is set to be one of the worst in the history of the country.

An urgent alert from the Illinois State Rifle Association outlined what could be in the bill:

The ISRA has learned from a credible source that Illinois Senate President John Cullerton will introduce a so called “assault weapons” ban on Wednesday when the legislature returns for its “lame duck” session.

Cullerton hopes to ramrod the bill through and get it to Governor Quinn for signature by Friday. If he is successful at doing so, nearly every gun you currently own will be banned and will be subject to confiscation by the Illinois State Police.

Based on what we know about Cullerton’s bill, firearms that would be banned include all semiautomatic rifles, pistols, and shotguns.

Pump action shotguns would be banned as well. This would be a very comprehensive ban that would include not only so-called “assault weapons” but also such classics as M1 Garands and 1911-based pistols.

There would be no exemptions and no grandfathering. You would have a very short window to turn in your guns to the State Police.

In a report by Paul Joseph Watson, the fact that the bill would also heavily regulate gun ranges and essentially criminalize all gun owners is detailed.

The bill, the precise text of which has not yet been released, would virtually ban all modern firearms including semiautomatic rifles, pistols, and shotguns, and pump action shotguns. The legislation could be signed into law as early as Friday, leaving most guns “subject to confiscation by the Illinois State Police.”

In confirming the bill’s imminent introduction, the NRA’s Illinois rep. Todd Vandermyde also warned that the legislation would place crippling regulations on private gun ranges and place them under state control.

“Sources say the new bills would require any range open to the public to be run by an FFL. That they would be licensed under unlimited rules and regulations by the State Police. If you say what the Governor did under his AV of SB-681, you can imagine what kind of rules/standards he would put in place to run a range,” Vandermyde wrote on the IllinoisCarry.com website.

This outright attack on the 2nd Amendment comes at a time when gun rights are under heavy attack throughout the country. 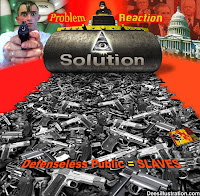 The Illinois State Rifle Association (ISRA) is claiming that it has learned from a credible source that Illinois State Senate President John Cullerton plans to introduce an “assault weapons” ban on Wednesday January 2nd during the course of the “lame duck” session.

Cullerton’s apparent strategy is to ram the bill through the Illinois State Congress during the “lame duck” and provide the passed version to Governor Quinn by Friday for signing. Quinn is, of course, a notorious gun grabber.

If the bill passes, according to the ISRA, “nearly every gun you [Illinois residents] currently own will be banned and will be subject to confiscation by the Illinois State Police.”

Based on what we know about Cullerton’s bill, firearms that would be banned include all semiautomatic rifles, pistols, and shotguns. Pump action shotguns would be banned as well. This would be a very comprehensive ban that would include not only so-called “assault weapons” but also such classics as M1 Garands and 1911-based pistols. There would be no exemptions and no grandfathering. You would have a very short window to turn in your guns to the State Police to avoid prosecution.

According to The Truth About Guns, there will actually be two bills – “one for semi-automatic rifles, lever guns, shotguns and handguns with certain features (e.g., threaded barrels); and one for ammunition magazine capacity.”