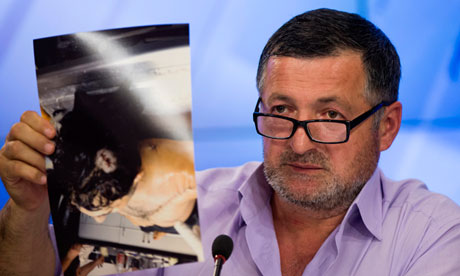 Two Massachusetts state troopers recorded much of what happened on May 21, 2013, the night when the questioning of murder suspect Ibragim Todashev went disastrously wrong. It’s time to release those tapes. Too many important details of the chain of events leading up to Todashev’s death remain unclear, and the latest news to emerge — that the FBI agent who fired on Todashev had a troubling record of police brutality accusations, something none of the previous inquiries had disclosed — reinforces concerns that the public has received only a partial, airbrushed accounting of Todashev’s final hours.

Todashev came under scrutiny last spring, after investigators linked him to Marathon bombing suspect Tamerlan Tsarnaev. The two men shared a passion for martial arts, as well as a Chechen heritage. Todashev had left Massachusetts, but police tracked him down in Orlando. Todashev wasn’t involved in the bombing, but investigators concluded that he and Tsarnaev did participate in a different crime: a 2011 triple murder in Waltham. The night of his death, Todashev had reportedly confessed to a role in those killings just minutes before he attacked his questioners. Todashev’s death means that he will never face justice for the Waltham killings, and also can’t answer questions about Tsarnaev.

The split-second decision to open fire may well have protected law enforcement; Todashev was highly trained and violent. Still, the failure of the investigations to include the relevant fact that the FBI agent, Aaron McFarlane, had previously been the subject of two police brutality lawsuits and four internal investigations at his old job seriously diminishes the credibility of their findings. His past conduct was clearly relevant to evaluating his claims that the shootings were justified. The reports exonerated McFarlane, but such an omission creates the impression they weren’t looking very hard.

The tapes captured by the Massachusetts officers do not include the moment of the shooting, and contain other gaps too. They will not answer every question. But they are still the strongest evidence that exists from that night. The official accounts of Todashev’s shooting can no longer simply be accepted as complete and reliable. Ending the secrecy around the tapes would be a good first step to restore confidence.

Tampa, Florida – The Council on American Islamic Relations is seeking to have the investigation into the shooting death of Ibragim Todashev reopened.

The 27-year-old was shot and killed when he attacked an FBI agent inside his Orlando-area apartment who was questioning his friendship with Boston bombing suspect Tamerlan Tsarnaev.

Turns out, the FBI agent, whose identity was released this week, was involved in two police brutality cases while an officer with the Oakland Police Department back in 2004.

The group argues that when the Orange-Osceola state attorney’s office investigated the shooting and eventually cleared FBI agent Aaron McFarlane, his background should have been part of the investigation, which it was not.

The group has sent copies of letters sent to the FBI, Department of Justice and State Attorney’s Office in Orlando — asking to reopen the investigation.

So why defend a man with reported ties to terrorism?

“This is about insuring that our law enforcement abide by the absolute highest standards when it comes to protecting our security and our liberty,” Shibly said.

Famed Bay area attorney Barry Cohen represents Todashev father, who lives in Chechnya, but traveled to Tampa last year to meet with representatives with the FBI to request a thorough investigation.

“They didn’t put that in the report because they were hiding it and concealing it from the public. They were embarrassed and they should have been embarrassed,” said Cohen. “Now that we have this information, there’s going to be a lot of things happening in the near future — that we’re going to be getting to the bottom of this.”

The attorney Jeff Ashton’s office released a statement to 10 News on Friday that reads:

“I received the May 13, 2014 letter from CAIR by email at approximately 3:36 a.m. on Wednesday, May 14, 2014. I am in the process of examining the contents of the letter and attachments which were sent and will respond directly to Mr. Shibley and CAIR when my review is complete.”

Attorney for the Todashev also question how McFarlane got a job with the FBI after being the subject of two police brutality lawsuits.

10 News did reach out to the FBI for comment by phone, but have not heard back.

A civil liberties group demanded answers from federal and state investigators who cleared a Boston FBI agent in the shooting last year of a friend of Tamerlan Tsarnaev, following a Globe report Wednesday on the agent’s troubled record as a police officer in California.

Hassan Shibly, executive director of the Council on American-Islamic Relations in Florida, said the Justice Department and a Florida prosecutor should have disclosed that agent Aaron McFarlane was the subject of police brutality lawsuits and internal affairs investigations and that he pleaded the Fifth Amendment during a police corruption trial in their March reports exonerating McFarlane in the shooting.

On May 22, 2013, the FBI agent shot and killed Ibragim Todashev after he allegedly confessed to helping Tsarnaev kill three men in Waltham in 2011. Todashev, a 27-year-old mixed martial arts fighter, allegedly attacked the agent and a Massachusetts State Police trooper after he sat down to write his confession, prompting the agent to shoot him.

“Did your office know about the allegations of abuse, corruption, and falsifying evidence against the FBI agent who shot Mr. Todashev?” Shibly said in a letter to the Florida prosecutor, Jeffrey L. Ashton, citing the Globe and his own investigation of the shooting. “If your office did not know about the agent’s history, how can the public trust the thoroughness and reliability of the investigation?”

Shibly sent similar letters to the Department of Justice’s Civil Rights Division, which also cleared McFarlane in March, and the FBI, asking the bureau if it had investigated McFarlane’s background at the Oakland Police Department in California before they hired him in 2008.

Justice Department spokeswoman Dena Iverson confirmed that the department received the council’s letter and is reviewing it. Ashton did not respond to requests for comment. The FBI declined to comment on the letter.

The FBI has refused to address McFarlane’s record, but in California court records, McFarlane denied any wrongdoing. He said he pleaded the Fifth during a police corruption trial in 2003, after a prosecutor suggested he had illegally falsified a police report, only to avoid being unfairly swept into the controversy.

McFarlane also denied beating anyone, as two lawsuits claimed, and said the plaintiffs were the aggressors. Former colleagues described McFarlane as a fine officer in one of the most crime-ridden cities in the United States.

Oakland police declined to reveal the outcome of its internal affairs investigations, saying the information is confidential.

McFarlane joined the Oakland police in 2000 and retired four years later at age 31, apparently for medical reasons, according to court records. He is collecting a pension of more than $52,000 a year, according to the state-run pension system.

McFarlane’s path from the troubled Oakland Police Department, which is under federal court oversight, to the FBI raised a number of questions Wednesday.

“I think that almost everyone would agree that a $52,000 pension for four years of work without some additional factor is ludicrous,” he said in a recent interview.

James J. Wedick, a former FBI agent who ran the public corruption squad in Sacramento, said it is risky to hire agents whose credibility has been questioned because doing so could weaken future cases.

“In a New York minute, his credibility is flushed down the toilet,” he said. “There should be a voice in the room that says, ‘We are creating a problem here that we may not be able to overcome later on.’ ”

Until the reports clearing the agent were released in March, the investigation had been shrouded in secrecy, generating criticism of the FBI. Much was known about Todashev’s violent criminal record, including an arrest the month he was killed for allegedly beating two men in a Florida parking lot. He was a friend of Tamerlan Tsarnaev, now dead, who with his younger brother Dzhokhar is suspected of carrying out last year’s Boston Marathon bombings.

But little was known about the only witnesses to his shooting, the agent and a Massachusetts state trooper, Curtis Cinelli. Another trooper, Joel Gagne, had also witnessed his alleged confession — the troopers said they recorded it — but had stepped outside to make a phone call shortly before the shooting.

The FBI and Ashton had refused to identify the agent and the troopers, citing concerns for their safety.

The Globe obtained the agent and the troopers’ names by removing improperly created redactions from an electronic copy of the Florida prosecutor’s report.

Todashev’s family and friends said the official investigations of the shooting failed to scrutinize the actions of the troopers before the shooting. Even if Todashev had attacked, they said, the agent and troopers could have tried to interrogate him at a secure location, possibly preventing the death of a key figure in the investigation into Tsarnaev.