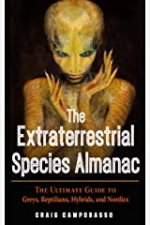 Special guest Hollywood Casting Director, Producer, Actor and ET Author and Experiencer Craig Campobasso joins me for a warm hearted and funny show.
Multiple award-winning filmmaker and Emmy-nominated casting director Craig Campobasso was fifteen when he started in the entertainment business. His young acting career was off to a great start; he landed his first national commercial for McDonald’s chicken sandwich, and spoke his first line of dialogue to Tuesday Weld in a MOW.

Craig’s mother Marie Donna King Campobasso told him from the time she was pregnant with him, that she knew he would become a writer. He fulfilled that prophecy when he was twenty-six, after he experienced a life-changing spiritual awakening. That’s when The Autobiography of an ExtraTerrrestrial Saga book series was born. His passion is to write stories that provoke the reader to think, to raise their consciousness, to expand their mind about Creation, while still entertaining in the Hollywood tradition.

Craig directed, wrote and produced the short film Stranger at the Pentagon, which was adapted from the popular UFO book authored by the late Dr. Frank E. Stranges. After production, the short film collected accolades. In September 2014, it won Best Sci-Fi film at the Burbank International Film Festival, selling out all 275 seats–a first for the festival. In 2015, it won a Remi Award at the World-fest Houston International Film Festival for Best Sci-Fi Short.

Craig has appeared on many radio shows, including Coast to Coast AM with George Noory twice. He has also been a guest on the Open Minds talk show, with Regina Meredith; and two episodes of Beyond Belief, hosted by George Noorey on www.Gaia.com. Craig has also appeared on The History Channel’s Ancient Aliens, where Giorgio A. Tsoukalos is the main Ancient Astronaut theorist.

“The Autobiography of an ExtraTerrestrial Saga: The Huroid Revolution and Other Warring Creatures” is the fourth book in the series.

“The Silence of the Hams: A Pictorial Memoir of the Making of a Cult Classic” is Craig’s memoir casting the greatest comedians of all time in an epic spoof movie based on horror classics. It was released in June of 2020.

“The Extraterrestrial Species Almanac: The Ultimate Guide to Greys, Reptilians, Hybrids, and Nordics,” is Craig’s latest book due out January 1, 2021.

Tonight I talk to Bobbie Richardson Author/Illustrator, Artist, Singer-Songwriter, Motivational Speaker, Channeler, Psychic, Empath, Visionary and Proud Mum.​ ​ A Mum who found wisdom through spiritual guidance. ​ “I have very little education, all of my wisdom was given to me by spirit through dreams, visions (seeing with my eyes into other frequencies) and real...

<p Special guest Cliff Dess is an ET experienceer , abuducee and an engineer with healing modalities. His bloodline goes back to UK Royalty and he shares his unique experiences with us tonight concerning how to protect yourself from these interferences. He explains how as an Et abuducee on how they actually get us out...