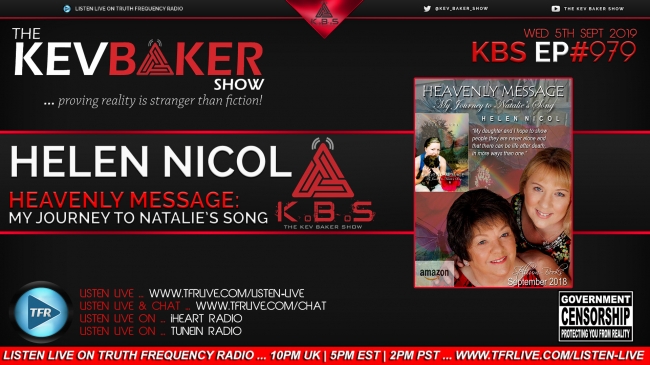 Helen Nicol, a fellow Scot & author, joins us at #TeamKBS to discuss her story that involves communication with the afterlife after she lost her daughter. Learn how Helen was still able to exchange messages with her daughter and how it led to the creation of something called “Natalie’s Song”.

Helen Nicol was born and raised in Stirling, Scotland. She married her first husband in 1985 at the age of eighteen –years old. She moved to Germany and lived as an Army wife for nearly seven years before she returned home to Scotland. She was a single parent with two sons and one daughter for over fourteen years until she moved to the Scottish Highlands and married her second husband. She had another son in 2011 and move back to her hometown in 2015 to be with her daughter when her daughter was very poorly.

During Helen’s life she has been a Secretary, Computer Keeyer, Shop Keeper, Actress, Singer, Dancer, Healer, Holistic Therapist, Researcher, Midwife and Author.
She wrote the poem ‘Heavenly Message’ which was adapted by Lino G Rocha to produce the song ‘Heavenly Message’ The poem and song were the inspiration for the book ‘Heavenly Message: My Journey to Natalie’s Song’.

She appeared on The UK Lottery Stars television programme 2015 with Anton du Beck to create a bigger awareness of the good work of Strathcarron Hospice at Home. She has been active in raising funds for Cancer related charities with her family and friends. As a Team, over £12,000 has been raised off and online.

Helen lives with her husband and son in the Central belt of Scotland. She still works as a midwife, Healer and Holistic Therapist and is busy producing her second book ‘My Little Friend Batbird’ which was inspired by the creation of ‘Heavenly Message: My Journey to Natalie’s Song’.