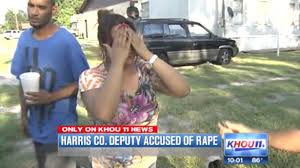 EAST HARRIS COUNTY, Texas –  A Harris County Sheriff’s deputy has resigned, amidst allegations of sexual misconduct made by a woman who lives in Cloverleaf.

Lisa Rodriguez said the deputy sexually assaulted her Tuesday while she was being questioned inside her East Harris County apartment. Normally, KHOU 11 News would conceal the identity of victims in these types of crimes but Rodriguez wanted everyone to hear her story.

The deputy looked up Rodriguez’s information and found there was a warrant out for her arrest on an assault charge. Rodriguez admitted she knew about the warrant, but while speaking with the deputy outside, she said he reached over and grabbed her necklace, fondling her breast.  She said he then suggested they speak inside her apartment.

Her two young daughters and niece were inside.

“I’m not thinking anything of it,” Rodriguez said. “I can trust this man, he’s an officer. What is he going to do?”

Then, Rodriguez said, the deputy suggested they go to her bedroom. That’s where, she said, the sexual assault happened.

“He says, so what are you going to do about this warrant?” Rodriguez said. “And he grabs my hand and puts it on his private parts.”

Rodriguez said she was forced to perform a sexual act on the deputy.

When he left, Rodriguez went to a Houston police station and filed a report.