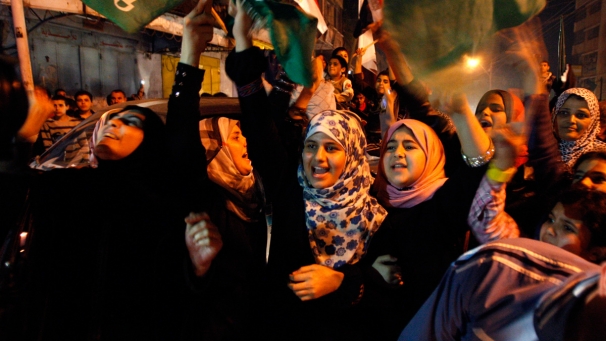 Hamas leaders and thousands of flag-waving supporters declared victory over Israel on Gaza’s first day of calm under an Egyptian-brokered truce Thursday, as Israeli officials flew to Cairo for talks on easing a blockade on the battered Palestinian territory.

Eight days of punishing Israeli airstrikes on Gaza and a barrage of Hamas rocket fire on Israel ended inconclusively. While Israel said it inflicted heavy damage on the militants, Gaza’s Hamas rulers claimed that Israel’s decision not to send in ground troops, as it had four years ago, was a sign of a new deterrent power.

“Resistance fighters changed the rules of the game with the occupation (Israel), upset its calculations,” Gaza Prime Minister Ismail Haniyeh of Hamas, who attended the rally, said later in a televised speech. “The option of invading Gaza after this victory is gone and will never return.”

At the same time, Haniyeh urged Gaza fighters to respect the truce and to “guard this deal as long as Israel respects it.”

The mood in Israel was mixed. Some were grateful that quiet had been restored without a ground operation that could have cost the lives of more soldiers. Others — particularly those in southern Israel hit by rockets over the past 13 years — thought the operation was abandoned too quickly.