Hagel Witch Hunt: Israel Not Allowed To Be Questioned Or Even Joked About On SNL

Hagel: Israel’s Nukes More of a Threat than Iran’s

In a newly surfaced video recorded in 2008, during a promotion event for his then-recently published book [1], Secretary of Defense nominee Chuck Hagel expresses more concern over Israel’s nuclear weapons than Iran’s and advocates the U.S. engage with Iran and Syria:

In the video, an audience member asks “if Israel is attacked by Iran or an Iranian proxy like Hezbollah in a way that existentially threatens Israel, almost to the extent that Israel was attacked in ’73 and it was existentially threatened, would you support an American airstrike using U.S. forces, B2s, whatever on Iran?” Hagel responds with a three minute lecture. A full transcription is below, with relevant highlights (courtesy of the Weekly Standard).

“I’ll answer your question as honestly as I can. That’s a hypothetical question that somehow frames up the simplicity of the hypothetical question. The complications in the Middle East, and I’m certainly not an expert there, I have a chapter on the Middle East, I do know [laughter], I know a little something about the Middle East. I spent a lot of time there. And I spent a lot of time in Israel with the prime ministers and others. You who are well informed on this issue know the complexities starting with go back to the Bible, go back to ancient times, thousands of years. I mean that, if you really want to start trying to understand the Middle East, Paul, or David Aaron Miller, who you may know, has a new book out on this, The Not So Promised Land [The Much Too Promised Land]. And if you want to read something that is very, very enlightening, this guy he’s getting tremendous reviews on it. He’s Jewish. He worked in the State Department, worked for Baker, worked for Albright, I think he’s worked for four secretaries of state, different Democrats, Republicans. But it’s a great, great book.”

“But your question, I mean the complication of what’s going on there, Hamas is already attacking Israel. Iran supports Hamas. Iran supports Hezbollah. What I would much rather see is this administration, or hopefully the next administration, engage Iran, engage Syria. When I hear the talk about – well you can’t talk with Iran, you can’t talk with Syria and we’re, we should stay where we are and support Israel, and so on, well you miss the point.”

“Now that doesn’t apologize for or doesn’t close our eyes to what Iran has been doing, what Iran does do, but unless they are engaged in some way , then I don’t see this getting any better, and then where this could go, where this could eventually go. Someone was asking me the other day about a nuclear exchange in the world, where that would come from. I said well I’ll give you a scenario that’s very real. If Israel gets backed up enough into a corner and Israel uses a tactical theater nuclear weapon, you want to talk about seeing some things unravel in the world. The United States shouldn’t even be thinking about options of bombing Iran or anybody else. I mean we got our hands full right now. And we’re in such a hell of a mess.”

ADL, AJC urge further review of Hagel’s record in light of 2007 remarks on US-Israel ties, just ahead of senate vote. 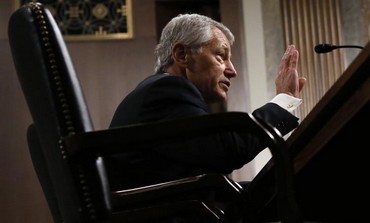 WASHINGTON – Two centrist Jewish groups called for further review of Chuck Hagel’s record in light of an account of a 2007 speech in which he allegedly said the State Department acted as an “adjunct” of Israel’s foreign ministry.

Hagel, US President Barack Obama’s nominee for defense secretary, has the support of a majority of senators, but confirmation of his nomination was blocked on February 14 by several Republican senators exercising their power to hold any vote.

“Chuck Hagel has served this country, and his state, with distinction, as we have had the privilege to tell him in person,” the American Jewish Committee said in a statement. “But in light of his complex record in the Senate and controversial statements he has made since his public service on strategic and political affairs – notably grappling with the range of pressing Middle East issues – AJC believes that further Senate deliberation is called for before any final vote is taken.”

Sen. Lindsey Graham (R-S.C.) said Sunday that Defense Secretary nominee Chuck Hagel sent him a letter disavowing a comment about Israel and the State Department that he allegedly made in 2007.

“I got a letter back from Sen. Hagel in response to my question, did you say that, and do you believe that? And the letter said he did not recall saying that. He disavows that statement,” Graham said on “Fox News Sunday.”

Graham was referring to a 2007 blog post indicating that in a speech at Rutgers University, Hagel said the State Department had become adjunct to the Israeli Foreign Minister’s office. The South Carolina Republican appeared satisfied with Hagel’s disavowal of the remark, barring new developments.

“Well, if in fact that’s true, that would end the matter,” Graham said, adding, “I just take him at his word unless something new comes along.”

American Columnist Kevin Barret told Press TV’s US Desk that a group of American senators who are serving the interests of Israel delayed the confirmation of U.S. Secretary of Defense nominee Chuck Hagel.

“Interestingly, these senators from Israel are virtually all Republicans. Now the Republican Party in the United States has a history of pretending to be the extremely patriotic American party and in the past the Republican Party was actually owned and operated with by the Zionists than the Democratic Party”, Barret, who is also the funding member of the Muslim-Jewish-Christain Alliance, argued.

(CNN) – Sen. John Barrasso said Sunday that when Republicans held up a vote last week on Chuck Hagel’s nomination to be defense secretary, it wasn’t a political ploy, but a sign of serious questions about the nominee.

“I have grave reservations,” Barrasso said on CNN’s “State of the Union.” “I think he’s been wrong about Iran, wrong about Israel, wrong in Iraq, wrong with nuclear weapons. I absolutely plan to vote against him.”

Obama nominee for defense likely to get confirmed: top Republican 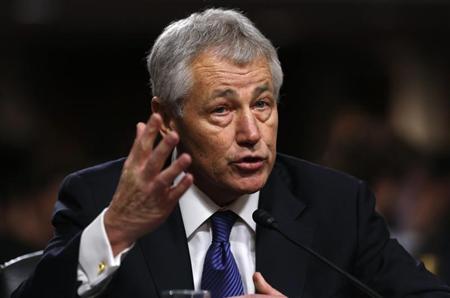 (Reuters) – A senior Republican senator said on Sunday that party colleagues will drop tactics to delay a vote on former Senator Chuck Hagel to be defense secretary, saying that President Barack Obama’s nominee likely has sufficient support to be confirmed into this key post.

“We will have a vote when we get back, and I am confident that Senator Hagel will probably have the votes necessary to be confirmed as the secretary of defense,” Arizona Senator John McCain, who has led the opposition against his former Republican colleague, told NBC’s “Meet the Press” program.

Weapons of Mass Distraction – Senate is Filibustering the Wrong Guy

Abby Martin talks about the recent US Senate filibuster of Chuck Hagel’s nomination as Secretary of Defense, adding that John Brennan’s nomination should have been the one filibustered.

WASHINGTON – Chuck Hagel has been held up en route to his new job as the Pentagon’s top boss.

In an unprecedented move, Senate Republicans are filibustering a vote to confirm President Barack Obama’s pick as the next defence secretary.

But the GOP, still trying to put the screws to the White House over the Sept. 11 terrorist attack in Benghazi last fall, are demanding answers from the administration.

(Democrats have 55 of the Senate’s 100 seats, which is enough to confirm Hagel, but 60 votes are required to break the filibuster and hold a simple majority vote.) 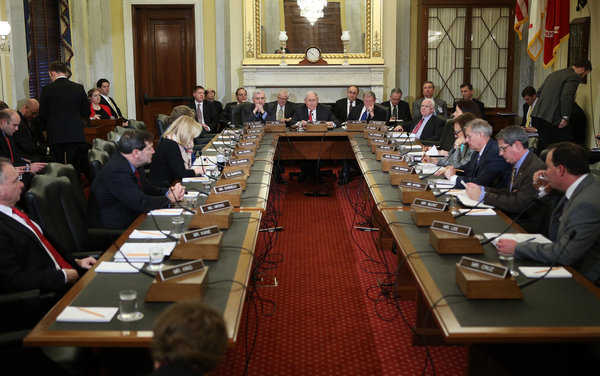 WASHINGTON — After a combative two-hour debate that tested the bounds of Senate collegiality, the Armed Services Committee on Tuesday approved the nomination of former Senator Chuck Hagel as defense secretary on a sharply partisan vote.

The 14-to-11 vote to send the nomination to the Senate floor with a favorable recommendation was the latest step in a process that has deepened festering hostilities between Congressional Republicans and the White House and has exposed stark disagreements over wartime foreign policy.

After the vote, Republicans threatened to try to filibuster the nomination of Mr. Hagel, a decorated Vietnam War veteran whom some had worked with as a member of their own party, while Democrats were promising to force a vote of the full Senate as early as Wednesday night.

At times, the meeting slipped into an unusually accusatory and bitter back-and-forth, with Republicans like Ted Cruz, a freshman senator from Texas, going as far as to suggest that Mr. Hagel had accepted money from nations that oppose American interests.

Saying that he had serious doubts about the source of payments that Mr. Hagel had accepted for speaking engagements, Mr. Cruz declared, “It is at a minimum relevant to know if that $200,000 that he deposited in his bank account came directly from Saudi Arabia, came directly from North Korea.”

In this sketch performed at Saturday’s dress rehearsal but which was ultimately cut from the show, “Saturday Night Live” spoofed the contentious confirmation hearings for President Obama’s nominee for secretary of defense, Chuck Hagel (played here by Jason Sudeikis).

In the “SNL” parody, Republicans are portrayed as going over-the-top in giving Hagel a tough time for being, in their view, insufficiently pro-Israel. Senators such as John McCain and Lindsey Graham balk at Hagel’s record of statements about the Middle East, and Sen. Tim Scott, an African-American Republican from South Carolina, gets emotional over how deeply his allegiance to the state goes, proclaiming that Israel has the nicest people, the tallest mountains and the best hip-hop.

McCain even asks Hagel if his devotion to the Jewish state would include performing sex acts on a donkey at the insistence of Israeli Prime Minister Benjamin Netanyahu, which led to several of the “SNL” cast members to break character (this was a dress rehearsal, after all).

Check out the clip above to watch the Republicans fight over who is the most pro-Israel.