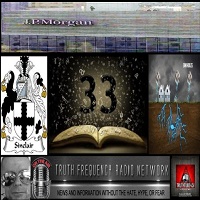 Kev Baker is joined by John Sinclair & Marty (DJsNorthWest on Youtube. From Sink Holes to the Sinclairs, Banker Deaths to the number 33, this is one info packed show!

Tonight the guys take a look at the newest in a series of banker suicides….or were they suicided??

Today seen the 7th “suicide” of yet another high placed banker. Is there a cover up going on? Is there a collapse coming? Or do we sometime look for a connection that sometime, just sometimes, isnt there.

Kev they tell the listeners about his recent bombardment of the number 33. It just keeps popping up everywhere

The guys then discuss the latest in a serious of sink holes that has opened up in the uk over the past weeks. Are we sinking? Is it just the weather as suggested? Could it be fracking? Join the guys to get there take on it

In the second half of the show the guys take a close look at John! It turns out his ancestors are part of the “BLOODLINE”. The guys go into the roots of the Sinclair cland and some of the history will blow you away!