Fuse lit in Middle East: Escalation of tensions in Gaza, clashes intensify between Syria and Turkey

October 8, 2012 – ISRAEL – Israeli warplanes responded immediately, striking a number of rocket-launching squads as they fired toward Israel, according to the military, and hitting several facilities belonging to Hamas, the Islamic group that controls Gaza, which the military said were being used to store weapons. Ashraf al-Qedra, a spokesman for the Health Ministry in Gaza, said that five Palestinians were injured in Monday’s strikes, one of them seriously. The latest flare-up began with the missile strike on Sunday against two men who Israel said were members of jihadist groups involved in terrorist activity against Israel. Some Palestinian news outlets identified the two men as members of radical Salafist groups. Gaza medical officials said that the two, who were struck while riding on a motorcycle, were critically wounded, and that at least eight passers-by were also injured. A spokeswoman for the Israeli military said that up to 30 mortar shells had fallen inside Israel on Monday morning, and the military said that a number of rockets also struck Israeli territory near the Gaza border. The armed wings of Hamas and Islamic Jihad, a smaller militant group, claimed responsibility for the rocket and mortar fire, saying that they were ai

ming at Israeli military bases near the border. A spokesman for the military wing of Hamas, known only by his nom de guerre, Abu Obeida, said that Monday’s attacks were meant as “a message” that “the Palestinian resistance will not allow unilateral aggression” from Israel. He warned of “stronger, expanded responses” if the Israeli raids continued. Most of the rockets and mortars fell in uninhabited areas in Israel, but the military said that some buildings were damaged. Several goats were killed in a petting zoo in an Israeli communal farm near the border, according to the news Web site Ynet. Israelis were marking the last day of the Sukkot holiday on Monday, and schools and offices were closed. Israelis near the Gaza border were advised to remain close to bomb shelters and protected areas. The Education Ministry in Gaza said that four schools in southeast Gaza were evacuated because of Israeli shelling in the area. Hamas has largely adhered to an informal, if fragile, cease-fire with Israel and has acted in the past to rein in smaller groups, but this was the second time in less than four months that Hamas joined in firing rockets at Israel. 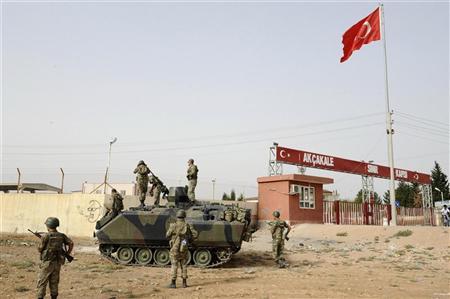 Escalation of Turkish-Syrian clashes: Turkey’s military launched a retaliatory strike after Syria fired a mortar shell into countryside in Turkey’s southern province of Hatay on Monday, a Turkish state official told Reuters. It was the sixth consecutive day of Turkish retaliation against bombardment from the Syrian side of the border, where President Bashar al-Assad’s forces are battling rebels. The exchanges are the most serious cross-border violence in Syria’s revolt against Assad, which began in March last year with protests for reform and has evolved into a civil war with sectarian overtones which threatens to draw in regional powers. The latest mortar round from Syria landed 150-200 meters within Turkey’s border in the district of Hacipasa at about 3 p.m. (1200 GMT), the official said. Turkey’s armed forces have bolstered their presence along the 900 km (560 mile) border with Syria in recent days. Syrian rebel sources in Syria’s Raqqa province, bordering the Turkish town of Akcakale where Syrian shelling killed five civilians last Wednesday, said they had seen five Turkish army trucks full of soldiers, patrolling the Turkish side of the border. –Reuters The Guardian is reporting that Mitt Romney would “arm the Syrian rebels.”

“Mitt Romney will call for an escalation of the conflict in Syria by arming rebels with the heavy weapons needed to confront president Bashar al-Assad’s tanks, helicopters and fighter jets.

Romney is to make the proposal on Monday in what his campaign team has billed as a major foreign policy speech in Lexington, Virginia.”

Could there be any political interest in the ousting of Middle Eastern regime leaders? In my opinion, it seems as if there is.

Leading bankers who advocate central banking systems want to establish them in each country throughout the world because of the control and wealth they amass.

According to G. Edward Griffin, the Federal Reserve System was concocted by wealthy banking interests such as JP Morgan, Rockefeller, and Rothschilds on an island off the coast of Georgia known as “Jekyll Island.”

These banking families formed a cartel, which means they eliminated competition allowing for increased profits. After forming this cartel a scam was set up designed to rob the public with hardly any dissent.

The scam is rather simple.

It works like this: they print off gigantic quantities of fiat money with absolutely no tangible backing. thus making them worthless.

Once printed off, they charge interest on this money that has no value. In a nutshell, they are giving themselves money by charging a fee on something that is worthless.

Knowing how this scam works, it is noticeable how the nations who are not under control of a central bank are the ones being attacked by unfathomable amounts of Western war propaganda, as well as being attacked via proxy war methods or literal war.

Dr. John Coleman in his book “The Conspirators’ Hierarchy the Story of the Committee of 300” points out that the interests who control the third world by economic means has a heavy incentive to keep them in a third world state due to the possibility of losing their control.

He illustrates that when third world nations attempt to acquire a nuclear footing it could bring them out of the ruts into a much less dependent nation and into a sovereign one. This is currently what we are seeing with Iran.

In regard to Romney’s proposal, it is obvious that an elite few, whether they are affiliated with the oil cartel or banking cartel, have interests in [re]claiming dominion over Syria.

The Iraq war was really about oil, according to Alan Greenspan, John McCain, George W. Bush, Sarah Palin, a high-level National Security Council officer and others.

Five months before September 11, the US advocated using force against Iraq … to secure control of its oil.

The Afghanistan war was planned before 9/11 (see this and this). According to French intelligence officers, the U.S. wanted to run an oil pipeline through Afghanistan to transport Central Asian oil more easily and cheaply. And so the U.S. told the Taliban shortly before 9/11 that they would either get “a carpet of gold or a carpet of bombs”, the former if they greenlighted the pipeline, the second if they didn’t. See this, this and this.

Well, we’re in Libya because of oil.

And the U.S. and UK overthrew the democratically-elected leader of Iran because he announced that he would nationalize the oil industry in that country.

It’s a War for GAS

But it’s about gas as much as oil …

The critical oil and natural gas producing region that we fought so many wars to try and protect our economy from the adverse impact of losing that supply or having it available only at very high prices.