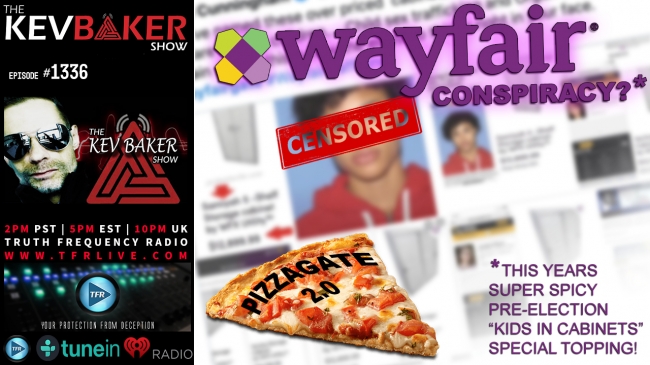 In this episode i address the on-going trending story that involves a website called Wayfair & a theory put together by the Reddit detectives & seized upon by the Facebook forensic expects the puts forward the idea that there are children being trafficked in plain-site via this publicly available website. I discuss what the “conspiracy” alleges & explain what i think is going on here, and why its going on right now, in 2020….. THE ELECTION YEAR!

#Wayfair is #Pizzagate 2.0 – it has all the hallmarks of the pizzagate narratives that went viral around the globe in the lead up to the 2016 election of Donald Trump. I go over how some of us had been waiting for the pizzagate 2.0 with this being another election year & Wayfair just me be it. I go over how conspiracies, especially in the build up to election, in modern times, especially with the emergence of social media/big date, are themselves part of a bigger conspiracy to socially engineer people back into the left-right paradigm game.

I go over the REAL conspiracies & criminals that we are being distracted on by reacting emotionally to what i have to admit is one really creepy theory etc & that includes hashtag wars, memetic warfare & the war for all of our minds.

There are certain characters that i point to as being insturmental in the conspiracy to use conspiracy to politicize people one way or another, with Stevee Bannon featuring heavily. And, as ive always said, i dont do either side, left or right, both are separate cheeks of the one very ugly mutate asshole called politics, so this episode concentrates on the people on the right that are vying for your attention. Watch this space for an equal opportunities style exposee and bashing of those on the left that are doing the same but with slightly different narratives & nuances