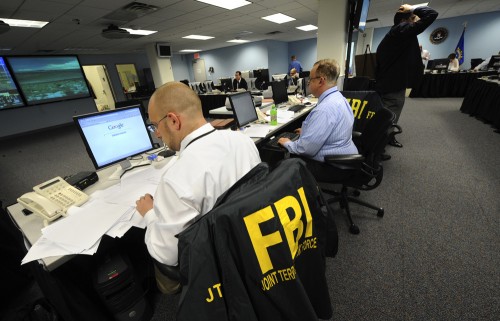 Disclaimer: If you can’t handle paranoid conspiracy theories, stop reading this now. If you’re currently taking SSRIs, please stop reading this instant. Leave this website. There is information here that challenges the authority of officialdom, and thus can be construed quite correctly as “anti-government”. Continue reading at your own risk.

For those too compelled or too lazy to click away, the fact is that the FBI routinely incubates terror plots only to stop them at the last moment so they can beat their chests in press releases that recount their heroics. A good book was written about the phenomenon called The Terror Factory. The book revealed that at least 150 foiled terror attacks since 9/11 were actually incubated by the FBI.  For those keeping score, that’s about one fake terror plot per month, every month, since 9/11.

Then one of the FBI-orchestrated events went live with an attack known as the Boston Marathon bombing.

Who can forget shortly after the bombing, while the FBI remained silent, the Internet exploding with open-source researchers using images to investigate the bombing? The New York Post was even so bold to post false profiles of the alleged bombers. The wild speculation prompted the FBI to release the images of their chief suspects and ask in dramatic fashion for the public’s help in identifying them, while simultaneously warning everyone away from sharing any unofficial information.

Yet, as it turned out, it was all a lie because the FBI did indeed already “know these individuals” since they recruited them two years before the Boston bombing. And the FBI often called on the Tsarnaeva family prior to the attack, according to suspects’ mother who told RT  “They used to come [to our] home, they used to talk to me … they were telling me that he was really an extremist leader and that they were afraid of him,” Tsarnaeva said.

But they didn’t know who they were during that comic-book worthy press conference? Apparently the FBI also forgot to run a facial recognition search on Facebook too before they asked the public to help identify them. Is it a conspiracy theory to call BS on this charade? It seems so. Not to mention countless other dots that don’t quite connect on that official story. But let’s move forward.

Does it seem odd to anyone else that since the Boston Marathon bombing the number of foiled FBI terror plots has declined dramatically?  In fact, I can only find one from this year when the FBI aided a desperate wannabe bank robber in a bombing plot – clearly not a terrorism case. One measly local non-story, down from practically one per month.

The calm is odd for a number of reasons. The FBI recently changed their primary function from “law enforcement” to “national security”, aka “protecting the United States from a terrorist attack,” presumably to secure a seat on the war-on-terror gravy train. So you’d think they’d be more active in this arena.

This silence in foiled terror attacks seems even more deafening during the intense surge of “lone wolf” mass shootings lately. It also curiously occurs at a time when the DOJ’s “Domestic Terrorist Task Force” was lying dormant only to be rekindled now to confront domestic mass shooters.

If staging bomb plots to keep the American people afraid to justify war-on-terror profiteering is the FBI’s department, is it that far fetched to believe similar forces are orchestrating mass shooting patsies to serve their agendas? It’s naive to believe they aren’t capable of plotting such things as clearly they’ve proven to be. My guess is that incubating mass-shooting patsies are the DHS’s department, but that’s just wild speculation on my part.

It’s true that tyrants will do anything to gain and maintain control.  Add in the domestic military-industrial profits that explode in tandem with these terror events and you start to wonder if our “protectors” are working for the chancellor in V for Vendetta:

The “protectors” constantly need to convince the public that we “need” them. But it seems they, and they alone, stand to gain from recent violence. They want us to need them to snoop our digital records, frisk us at all public locations, add us to watch lists, give up our guns, and lock us away indefinitely without charges or trial if we’re suspected of having ties to terrorism. All to keep us safe. Such good protectors, right?. And they conveniently label anyone who opposes these assaults on civil liberties as “anti-government extremists” who might influence these crazed mass shooters. Almost scripted to perfection if you’re a tyrant.

We seem to be in a “be afraid” event cycle with this week’s grand finale of hyped shootings with a “see how we keep you safe” cycle likely to be right around the corner. Now that the DOJ/FBI’s domestic terrorism task force is back in action, I bet that there will be less live shootings and more foiled terror plots in the second half of 2014. Any takers?