October 19, 2012 – SAN FRANCISCO, CA – A bright fireball, reportedly with hues of red and orange, streaked across the night sky visible from San Francisco’s Bay Area on Wednesday, October 18, around 8 p.m. local time (3UTC on October 18). Many say they heard a boom, which was so loud it “shook their homes,” some residents said, making them think it may be an earthquake. Belmont, California astronomer Wes Jones captured the fireball as it sailed across the sky on October 17, just as it was entering the trees.

A Mystery Object Captured on Radar Raises Eyebrows – Is a Cover-Up in the Works?

“I read the article on your site and wanted to email you to let you know that I live in Fort Worth and last night at approx 11:30 I was outside and saw what looked like a green meteor in the eastern sky coming downward in the distance. I only saw it for a few seconds before it was out of site. Green and no tail.”

“Reading about what happened in Webster Parish, Louisiana – I looked at the map and sure enough that area is straight east of here on I-20.”

“It had to be what is being reported. Not sure if this helps.”

“I live in Bossier City, it definitely was an object that came from the sky and crashed.”

WEBSTER PARISH, LOUISIANA — A bunker at camp Minden has been identified as the official source of a large boom that shook the ground and shattered windows late last night.

Apparently the bunker was the property of a private contractor (Explo Systems, INC) who controls a bunker facility within the camp property.

This would mark the second explosion within weeks to haunt the camp.

400 prisoners from Webster Parish jail were evacuated along with 600 students from two nearby schools.

However, this simply does not fully add up to other eyewitness reports.

One woman reported debris hitting near a major interstate;

And a woman reported hearing what sounded like debris hit a shop on Bellevue Road in the Dixie Inn area.

If it was a meteorite, that would fall to NASA and the Air Force to investigate. A spokeswoman for Barksdale Air Force Base public affairs said that the installation is investigating and that whatever the source, it didn’t originate at the base.

Another eyewitness report by Laura Kester Moehring on the KTBS Facebook stated;

“Felt the boom at 11:30 but also were driving west on I20 in Shreveport at 10:30 when my husband and I both saw a greenish glow streaking rather low and shakily across the sky with sparks behind it. Angle was from the NW. Couldn’t estimate distance,”

Others reported that the entire sky lit up orange with sparks.

The official Wikipedia page for the town reads;

On October 15th 2012 at 11:30pm CST, a large explosion rang out and many residents saw the sky light up. Webster Parish officials claim that an explosive ordinance bunker in Camp Minden had exploded but had done its job in containing the blast and focusing the energy upward to minimize damage.[5]

Some residents have taken this explanation and accepted it, while others have called this a ‘first contact’ event claiming that just before the explosion a large orange light was seen in the sky above.

AccuWeather.com ran an analysis from radar imagery and was able to come up with a 3D render of the object.

The explosion sent a mystery object flying that was captured by radar in Shreveport. Speculation this morning focused on the possibilities of UFO’s and meteors before the confirmation of the bunker explosion was released. 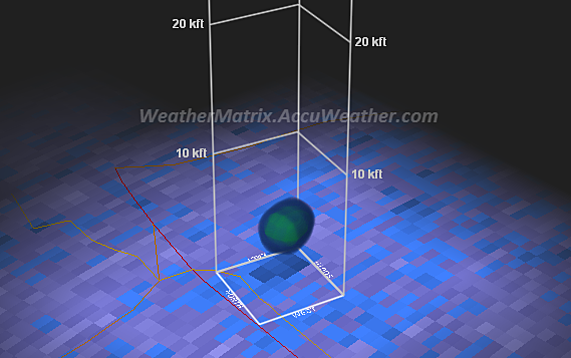 Above is a 3D image with the lower reflectivity colors transparent so you can see the most dense part of the object. Here’s the same with the 25dBZ reflectivity level outlined (meaning that the “hollow” part is >25dBZ): 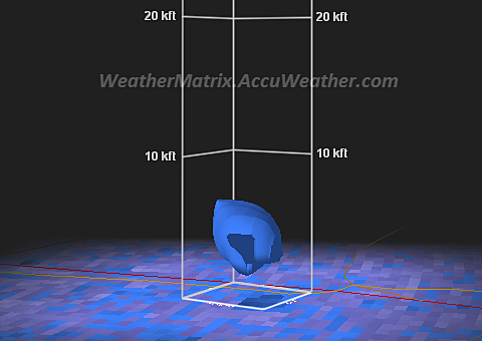 Remember we’re using the software to “smooth” the data here. The actual data looks like this: 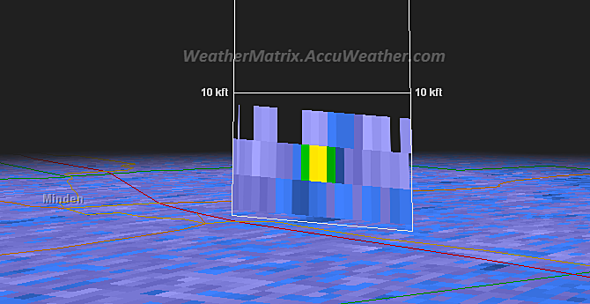 So you can see that, although we do have a few different horizontal layers we’re looking at (the 2-D shots here are at 1.5 degrees elevation, where the signal was the strongest), clearly the software is estimating a spherical object by rounding off the corners (and in 3D mode, the strongest return (yellow) is blended out completely).

This was a significant object, showing up at a reflectivity of 42 dBZ (which would normally be “moderate rain”) but it is also a very small object, when seen in comparison to the radar screen: 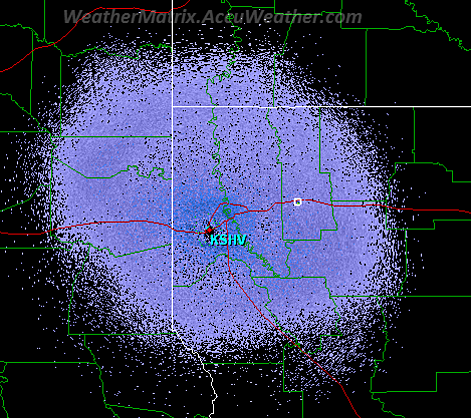 No injuries have been reported from the incident. The NWS also captured radar of the smoke plume from the explosion.

“Because of the historical nature we’ve had in the past, we contacted Camp Minden and Bayou Dorcheat Correctional Center,” Sexton said. “They checked and everything was fine.”

Deputies went on to check with the natural gas plants and refineries in the parish, which also reported no incidents.

“We checked all of those – nothing,” the sheriff said.

The National Weather Service reported a plume thicker than a cloud containing unusual particles hovering about 2,000 feet in the air just north of Interstate 20 at Goodwill Road.

This thick cloud if indeed was made up up munitions and building materials must have contained various toxins associated with munitions.

In fact, unexploded munitions found undersea have been linked to cancer.

Monday night at around 11:26 pm, a large explosion occurred to the southwest of Dixie Inn, in Webster Parish, approximatey 4 miles southwest of Minden, or 28 miles east of Shreveport.

The initial event occurred at Latitude/Longitude 35.578 N, -93.351 W which is in the borders of the Camp Minden Army ammunition plant. A large flash was observed, citizens were shaken out of bed and windows were shattered during the late night hours October 15th.

Above is a Google Maps image of Camp Minden, where the explosion occurred.

The Shreveport, La National Weather Service Doppler Radar captured some images of the plume caused by the explosion.

The sampled radar imagery is very similar to what is usually seen with smoke plumes associated with wildfires, it was more vertical and concentrated as it traversed the area from southeast to northwest at approximately 10 mph. It slowly dissipated after approximately 34 minutes.

The above graphic shows the plume caused by the explosion as sampled by Shreveport, La National Weather Service Doppler Radar.

Click here for a Public Information Statement regarding the events surrounding the explosion.

Something about all of this just does not add up.

At this time we are calling for any tips or information on this subject to be submitted to: [email protected]

October 2, 2012 – SPACE – If astronomers’ early predictions hold true, the holidays next year may hold a glowing gift for stargazers—a super bright comet, just discovered streaking near Saturn. Even with powerful telescopes, comet 2012 S1 (ISON) is now just a faint glow in the constellation Cancer. But the ball of ice and rocks might become visible to the naked eye for a few months in late 2013 and early 2014—perhaps outshining the moon, astronomers say. The comet is already remarkably bright, given how far it is from the sun, astronomer Raminder Singh Samra said. What’s more, 2012 S1 seems to be following the path of the Great Comet of 1680, considered one of the most spectacular ever seen from Earth. “If it lives up to expectations, this comet may be one of the brightest in history,” said Samra, of the H.R. MacMillan Space Centre in Vancouver, Canada. So what makes a comet a showstopper? A lot depends on how much gas and dust is blasted off the central core of ice and rocks. The bigger the resulting cloud and tail, the more reflective the body may be. Because 2012 S1 appears to be fairly large—possibly approaching two miles (three kilometers) wide—and will fly very close to the sun, astronomers have calculated that the comet may shine brighter, though not bigger, than the full moon in the evening sky. First spotted late last week by Russian astronomers Artyom Novichonok and Vitali Nevski of the International Scientific Optical Network (ISON), comet 2012 S1 was confirmed by the International Astronomical Union on Monday. But while we know what 2012 S1 is, it’s still unclear where it came from. Its orbit suggests the comet may be a runaway from the Oort cloud, where billions of comets orbit about a hundred thousand times farther from the sun than Earth is. Right now, 2012 S1 appears to be about 615 million miles (990 million kilometers) from Earth, between the orbits of Saturn and Jupiter, astronomers say. As the sun’s gravity pulls the comet closer, it should pass about 6.2 million miles (10 million kilometers) from Mars—possibly a unique photo opportunity for NASA’s new Curiosity rover. Current orbital predictions indicate the comet will look brightest to us in the weeks just after its closest approach to the sun, on November 28, 2013—if 2012 S1 survives the experience. As the comet comes within about 1.2 million miles (2 million kilometers) of the sun, the star’s intense heat and gravity could cause the ice and rubble to break apart, scotching the sky show. “While some predictions suggest it may become as bright as the full moon and even visible during the day, one should be cautious when predicting how exciting a comet may get,” Samra said. “Some comets have been notorious for creating a buzz but failing to put on a dazzling display,” he said. “Only time will tell.”

Scientists eye large, newly discovered comet that might crash into the sun in 2013 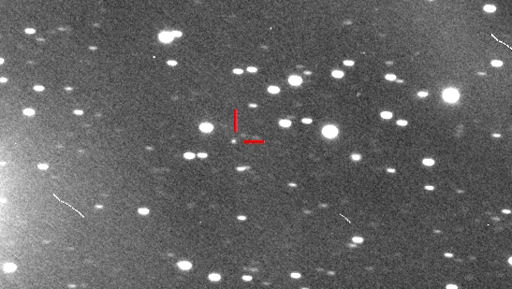 September 25, 2012 – SPACE – Astronomy forums are buzzing with speculation about newly-discovered Comet C/2012 S1 (ISON). Currently located beyond the orbit of Jupiter, Comet ISON is heading for a very close encounter with the sun next year. In Nov. 2013, it will pass less than 0.012 AU (1.8 million km) from the solar surface. The fierce heating it experiences then could turn the comet into a bright naked-eye object. Much about this comet–and its ultimate fate–remains unknown. “At this stage we’re just throwing darts at the board,” says Karl Battams of the NASA-supported Sungrazer Comet Project, who lays out two possibilities: “In the best case, the comet is big, bright, and skirts the sun next November. It would be extremely bright — negative magnitudes maybe — and naked-eye visible for observers in the Northern Hemisphere for at least a couple of months. Alternately, comets can and often do fizzle out! Comet Elenin springs to mind as a recent example, but there are more famous examples of comets that got the astronomy community seriously worked up, only to fizzle. This is quite possibly a ‘new’ comet coming in from the Oort cloud, meaning this could be its first-ever encounter with the Sun. If so, with all those icy volatiles intact and never having been truly stressed (thermally and gravitationally), the comet could well disrupt and dissipate weeks or months before reaching the sun.” Either of the above scenarios is possible, as is anything in between,” Battams says. “There’s no doubt that Comet ISON will be closely watched. Because the comet is so far away, however, our knowledge probably won’t develop much for at least a few more months.” Meanwhile, noted comet researcher John Bortle has pointed out a curious similarity between the orbit of Comet ISON and that of the Great Comet of 1680. “Purely as speculation,” he says, “perhaps the two bodies could have been one a few revolutions ago.”