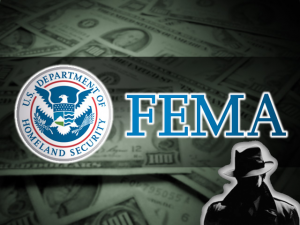 Before we broke the story first here on Truth Frequency Radio – BREAKING: FEMA IS PREPARING FOR AN IMMEDIATE DISASTER – BUYING STORABLE FOOD AND MORE, – we made contact with an insider at FEMA who discussed FEMA’s intentions for these inquiries. Here is the audio with transcribed text.

FEMA: Well, what we’re doing right now, we’re just doing a “What if” scenario, throughout the United States, basically. What we’re trying to see is if we…the Department of Homeland Security working directly with FEMA right now, is if we had a major disaster… which could be hurricanes, chemical, biological…any kind of natural disaster, etc. How many people could we take care of in the first 24 hours, as far as food and hydration products go? You know, the first 24 hours [are] the most critical. And if a “what if” scenario…ok, if this did happen on the East coast and the East coast from East of the Mississippi turned….if every city east of the Mississippi to the East coast is GONE…(clears throat)…pardon me. What happens to those survivors….looking at possibly 2, 3 million young survivors immediately, and how soon can we get to those individuals?

So, what we’re looking at here is finding the capacities and the capabilities within the food products industry to see how much we can fence in supply (within a 24, 48, and 72-hour period).

Uh, I’m not sure if you’re aware or not but how many vehicles, including tractor tailors with flatbeds, there’s also box trucks from Cutter, they feed the Federal Emergency Management Agency…

So, if the infrastructure is still there, we could drill…we do have the ability as the U.S. Government to take over the railroads, as well. During times of disaster, and help for survivors, and they’ve all agreed to that already as well, because they know it’s for the betterment of the people, survival. Subsidiaries that (unintelligible) these organizations they work with, they could probably provide flatbeds, for example. One I spoke to said they had 26 trucks..I’m sorry, 46 trucks, tractor-trailers, on-hand at all times. So, they can deliver to anywhere in the United States. Other ones I’d use would be UPS and Fedex.  And a couple other ones will be more situated toward railroad locations, so that would be the best avenue. We would normally use Federal Express. So, these are the kinds of questions we’ve been asking, as part of this team, and I have some other team members doing other products, as well. Basically trying to see if they…, “What’s the capacity of the market out there because we really don’t know.”

…That is one thing that has not been discussed. I will make a note of that, that’s a very good question. You’re the first one to ask that, and I don’t think anyone on our team has even thought about the underground possibilities, you know, as far as subways, and underground transit, stuff like that. But I will definitely ask that question.

That’s a new one, it’s a first for them, you know exactly what it is. And I think for those who have not…it’s…it’s kind of an unrealistic view when you capture it on television, but when you  see things, something like that, a major disaster, a major tornado or hurricane,  or just overall flooding, The realization hits you..”Wow, this really wiped everything out and these folks that are there, the survivors, have nothing, basically. ” Through Sandy, I think, the (unintelligible) noticed with reaction time was much better by the Federal Government, especially FEMA, in getting survivors to locations where they could have food, clothing and shelter…uh..if things were recoverable, we had coast guard, we had national guard, we had active duty in there assisting, as well. It sorta put the survivors, well, it put the survivors at ease when they said, “Hey, you have a place to go, we can give you food, clothing, and shelter, and then we can work on everything else after that. So, now we’re at the point where we’re like, “Okay, we have these distribution centers located throughout the United States, and we have capacity to store a large amount of materials, food products, etc. And hydration stuff.” And we’re saying, “Well, what’s the (unintelligible) like on the market? Based on shelf life, the products work from 7-25 years”, as you’re well aware.

That’s a long time to keep in storage. And if you can say, “Hey, we can store a million meals, or servings, at each location, then that’s a pretty decent amount for immediate response, I gotta say. (Unintelligible)…Immediate availability to get those Ryders (?) to well beyond the numbers you’ve seen in previous studies. In previous studies, you saw Katrina, but we’re talking more capability for potentially more than 2 to 5 million survivors, and distributing food products to them within 24 hours.

And what something like that does, and obviously you’re aware, uh…it brings out the best in people, and it brings out the worst people. I won’t say it brings out the worst IN people, it brings out the worst people. And that’s when those types of issues occur. (We’re) bringing out active duty military as well, to control the looting, and murders and shootings and robberies…and looting, and things like that. I’ll just use this for an example: What I’m getting out of survivors during Hurricane Katrina, except multiplying that, and we’re looking at anywhere from 2-5 million individuals being affected by it immediately. And that’s what we’re ramping up to and try to say, “Ok, if we had this happening, we would need as much survivor products as possible…and (unintelligible) …how much could it possibly do?

Based on the capability and how fast the industry is producing to do these services.

Uh, well, the first one, which has kinda fallen to the wayside, but I think is still a very realistic thing, is a nuclear holocaust, basically. You know, some idiot out there starts setting off dirty bombs everywhere , and before you know it, you have 2, 3, 10 million people in there trying to move at one time. And they stray from their areas.

You know, it’s obviously still a very real threat…uh…chemical warfare is very rampant, which most folks aren’t aware of. And any kind of natural disaster…For example, if we were to be hit with a meteor – we saw what it did in Russia and that was just a tiny meteor – and you multiply that 50-fold, and it would probably wipe out the Tri-State area.

And depending on where it hit – you know, if it hit New York, Pennsylvania, southern New Jersey, then there’s our 10-million limit, right there.
(Unintelligible)… “Wait a minute…how many?!” It’s a huge undertaking, obviously. And it requires a lot of coordination ; Logistics, the public/private sector, as well. There’s a lot of collaboration between a lot of different agencies.

There is potential, in just about every transportation location…uh…nation and worldwide…For example, in a lot of our harbors – you know, where we bring food in from overseas, etc. – things of that nature, a lot of the airports that would be the national, international or the locals basically we need to prepare.  What we’ve done, and we have prepared, we’re just more in-depth now, is if you had an attack on one of those international airports, and you have foreign military forces dropping in there, what would you do? Continuous responses to that, yeah, we do a lot of drills, as far as local, state, tribal levels. And we say, “Ok, today we’re going to evacuate this town of 15,000 people. You let the folks know about it, you get them involved so it kind of took them in a feeling of “Hey, they’re involving us, this isn’t going to be a spur-of-the-moment thing, now we know what we’re supposed to do if this ever does happen.

Absolutely, that’s one thing, rest assured is, uh, having been in the military as well, if the younger generation of military folks deserve a lot of credit…They know the wide scope of tasks and objectives, and they handle them all quite well. I’m glad you called, as well, instead of sending emails back and forth because perception, you know, you read this email, and I can see the immediate perception is like, “Do they know something that we don’t? Is…
Is something going to happen that we’re not aware of?” (laughs)…

Well, I guess in my mind, is, you’ve got hurricanes happening up north, we’ve had things on the southern border, the east coast, west coast…I guess it would depend on what exactly occurs, the type of incident, the time of the incident, and what’s being used in the incident. You know, is it a natural disaster, an earthquake, hurricane, floods? Is it man made? Is it, you know, a fire, for example, California, that gets out of control? If it can be stopped, and things of that nature, so it’s really hard to say. You know, I’m a mountain-type person, I’d prefer to be in the mountains alone…:D but, so, it would all depend, I can’t give you a definite answer on that. It would all depend on the extent of the disaster, that’s all. Where technology is least affected, that would probably be a good venture. And to have your own generators and solar power and things of that nature. You know, water purification system and (300?) miles would be a good place from the shore.