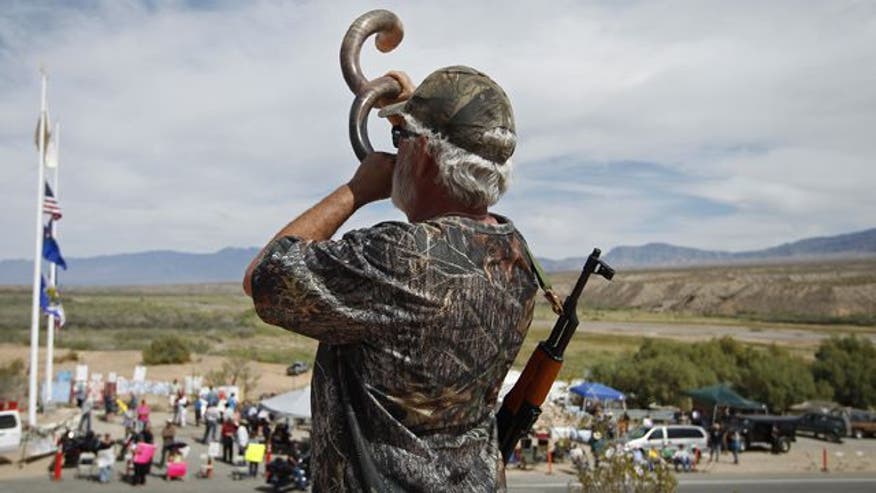 The Bureau of Land Management vowed Saturday that it would continue its legal fight to remove illegal cattle from a rural Nevada range after ending a tense weeklong standoff with a rancher and his supporters.

“After 20 years and multiple court orders to remove the trespass cattle, [rancher Cliven] Bundy owes the American taxpayers in excess of $1 million. The BLM will continue to work to resolve the matter administratively and judicially,” a statement from the bureau said. “We ask that all parties in the area remain peaceful and law-abiding as the Bureau of Land Management and National Park Service work to end the operation in an orderly manner.”

The BLM also announced that it was wrapping up its month-long operation to seize the 900 cattle roaming on federally owned land approximately 80 miles northeast of Las Vegas and would release the 400 head of Bundy’s cattle it had already seized “in order to avoid violence and help restore order.”

“Based on information about conditions on the ground, and in consultation with law enforcement, we have made a decision to conclude the cattle gather because of our serious concern about the safety of employees and members of the public,” the statement read.,” the statement read.

Bureau officials had dismantled designated protest areas supporting Bundy, who they say refuses to comply with the “same laws that 16,000 public land ranchers do every year.”

A group of about 1,000 supporting Bundy cheered and sang “The Star Spangled Banner” when BLM made its announcement.

The standoff at the ranch became increasingly tense the longer it lasted, prompting elected officials in several states to weigh in, militia members to mobilize and federal land managers to reshape elements of the operation. The Las Vegas Sun reported that some protesters were carrying handguns and rifles, but there were no reports of shots fired or injuries

The roundup started last Saturday after the BLM and National Park Service shut down an area half the size of Delaware to let cowhands using helicopters and vehicles gather about 900 cattle that officials say are trespassing.

Bundy, 67, and his large family cast their resistance to the roundup as a constitutional stand. He says he doesn’t recognize federal authority over state land.

The dispute that triggered the roundup dates to 1993, when the BLM cited concern for the federally protected tortoise. The agency later revoked Bundy’s grazing rights.

Bundy claimed ancestral rights to graze his cattle on lands his Mormon family settled in the 19th century. He stopped paying grazing fees and disregarded several court orders to remove his animals.

BLM faced criticism when police used stun guns on one of Bundy’s adult sons during a Wednesday confrontation on a state highway near the Bundy melon farm in the Gold Butte area.

Video of that confrontation spread on the Internet, along with blog commentary claiming excessive government force and calls to arms from self-described militia leaders. Some have invoked references to deadly confrontations with federal authorities, including a siege of a ranch home in Ruby Ridge, Idaho, in 1992 and the fiery destruction of a religious compound near Waco, Texas, that killed 76 people in 1993.

“Our mission here is to protect the protestors and the American citizens from the violence that the federal government is dishing out,” Jim Landy, a member of the West Mountain Rangers, who made the journey from Montana to Nevada, told Fox News Channel. “People here are scared.”

Sen. Dean Heller and Gov. Brian Sandoval, both Republicans, have also said they were upset with the way the BLM was conducting the roundup. After the areas were removed Thursday, Sandoval issued a new statement.

“Although tensions remain high, escalation of current events could have negative, long lasting consequences that can be avoided,” it said.

Amy Lueders, BLM state director in Nevada, said Friday that two protesters were detained, cited for failure to comply with officers at a barricade on Thursday and released.

That brought the number of arrests to three. Bundy’s son, Dave Bundy, was arrested Sunday on State Route 170 and released Monday with citations accusing him of refusing to disperse and resisting arrest.

Lueders said 380 cows were collected by Thursday. She declined to provide a cost estimate for the herding operation.