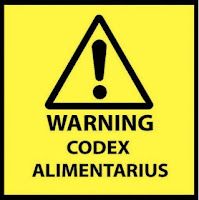 Demonstrating the lack of concern held by regulatory agencies for public safety or public opinion as well as the increasing attempts to become compliant with Codex Alimentarius regulations, the FDA has recently expanded the amount of ionized radiation that can be used to treat unrefrigerated raw meat.

As reported by Food Safety News, the two new policies decided upon by the FDA were issued in response to two petitions filed in 1999 by the Food Safety and Inspection Service of the U.S. Department of Agriculture.

While the previous policy was that only refrigerated or frozen meats could be irradiated, the new rule allows for the irradiation of unrefrigerated raw meat. The second rule change allows for increasing the dose of ionizing radiation in poultry from 3.0 kGY to 4.5 kGy.

Although a period for public comment is always set aside for regulatory agency decisions regarding potential changes to policy, the FDA promptly ignored the many comments it received from individuals all over the country as well as consumer advocacy groups which requested the denial of the two FSIS petitions.

The response from the FDA was that all of these comments, made by individuals and by groups such as Public Citizen and the Center for Food Safety, “were of a general nature” and “did not contain any substantive information that could be used in a safety evaluation of irradiated poultry.” This statement was made regarding both the poultry irradiation rule and the passage of a new meat temperature rule.

Predictably, the FDA has defended its decision by circular logic that flies in the face of science and common sense. The agency is claiming that “irradiating unrefrigerated meat was not found to increase meat’s toxicity, change the food’s nutritional properties or increase the likelihood of certain bacteria thriving on meat; therefore FDA has determined that this is a safe application for the process.”

Of course, while the FDA claims that irradiation is not found to increase toxicity or change nutritional properties, the very reason that the FDA has jurisdiction over food irradiation to begin with is because the process of irradiation can do just these very things. Even the FDA admits[1] that, because irradiation “can affect the characteristics of the food,” it is considered a “food additive.” Thus, because food additives fall under the purview of the FDA, irradiation is regulated (or not) by the agency.

By allowing for higher doses of irradiation in food, the FDA is knowingly complicit in covering up unsanitary food production practices by major corporations as well as accepting the inclusion of clearly harmful material (i.e. radiation) into the food supply. Keep in mind, irradiation is mostly used by corporations in order to cover up deplorable manufacturing conditions and dangerous food contamination.

However, much like the FDA’s position on genetically modified food, even the concept of consumer choice is nothing more than a smokescreen.

For instance, while the FDA states that all irradiated foods entering the supply chain must be accompanied by a radura symbol indicating the irradiation process, the fact is that this symbol is only required to be presented to the “first consumer,” not the average person actually buying and eating the food. More often than not, the “first consumer” is actually the high-level distributor of the food. Needless to say, the radura symbol is removed in short order before the goods are shipped to the market and long before they reach the people who purchase them directly.

Indeed, the FDA has made moves to derail consumer knowledge even further with relatively recent attempts to re-label irradiated food as “pasteurized” so as to obscure the real nature of the “treatment” process. In fact, the proposal even states that an “alternate term to ‘irradiation’” may be considered for use with no further suggestion as to what this term may be.

Therefore, one legitimately wonders whether or not, if the proposal should go through, the selected terminology will be even more obfuscating than that of “pasteurization.”

Indeed, the FDA has also pushed for Codex harmonization with vitamin and mineral supplements, as well as genetically modified foods[2].

With this in mind, it would be well within reason to expect to see the acceptable levels of food irradiation raised even higher in the very near future.
Notes:
[1] Federal Register Proposed Rule – 72 FR 16291 April 4, 2007: Irradiation in the Production, Processing, and Handling of Food, P.1. *Source no longer readily available online.*

Friday, December 07, 2012 by: Ethan A. Huff, staff writer
(NaturalNews) Rather than actually take the time to address the root causes of meat and poultry contamination, which more often than not are a direct result of outrageously unsanitary factory farming practices (http://www.naturalnews.com/025716_antibiotic_animals_antibiotics.html), the U.S. Food and Drug Administration(FDA) has instead decided to simply up the doses of radiation that industrial food producers are allowed to blast on their filthy, contaminated meat products.In the first new rule recently published in the Federal Register, the FDA specifies that “unrefrigerated uncooked meat” can now be irradiated right alongside refrigerated, frozen and cooked meat. And in the second new rule, the FDA increases the amount of ionizing radiation that can be applied to poultry products such as chicken by 50 percent, bumping the dosage up to 4.5 kilograys (kGy) of radiation from the previous 3.0 kGy.You can view the two published rules here:
http://www.gpo.gov/fdsys/pkg/FR-2012-11-30/pdf/2012-28967.pdf

These two rules, which were enacted quietly and without any media fanfare (big surprise), come more than a decade after the U.S. Department of Agriculture‘s Food Safety and Inspection Service (FSIS) first petitioned the FDA for their passage back in 1999. And in the years that followed, numerous consumer advocacy and food safety groups decried the proposals, warning that irradiation is dangerous.

But the FDA ignored all the comments made by these groups, which included reputable names like Public Citizen and the Center for Food Safety (CFS), and continued forward with its irradiation agenda. According to Food Safety News(FSN), the FDA actually went so far as to belittle the merit of the input given by these groups, referring to them as “general” comments that did “not contain any substantive information that could be used in a safety evaluation of irradiated poultry.”

Conventional Food May Soon be Sterilized with ‘Microwave Zap’

by Anthony Gucciardi
Natural Society
December 2nd, 2012
If you are among the millions who avoid ‘nuking’ food with microwave radiation in your own home, you may soon have yet another reason to avoid most conventional food items. Using the ‘recent emergence’ of salmonella and E.coli in food as a scapegoat, the corporation known as MicroZap is seeking to make its way into the food supply with its new ‘microwave zap’ technique. The technique effectively hits food with a super high level of microwave radiation, killing all living bacteria (including good bacteria that is necessary for digestion and proper overall function).The company says that by using ‘MicroZap’ technology, food can be ‘sterilized’ and mold-free for 60 days. Food that is zapped will not rot, as the food is completely ‘wiped clean’. Zapped for a set period of time, such as the example of 40 seconds for jalapeno peppers, the company is also seeking to hook up with the United States Pentagon for a contracting bid. The super microwave zap could be used to sterilize food like bread and therefore make it incapable of rotting for more than 60 days.

Numerous health practicioners have been known to utter a saying along the lines of ‘if it rots, it is likely good for you’. I don’t necessarily agree with this saying when considering that conventional food rots and is loaded with pesticides, GMOs, and other problematic substances, but the root of the saying holds very true. The reason that rotting food is good for you is that these foods contain beneficial bacteria that is absolutely essential for your overall health. Fermented foods are often the quickest to go bad, and it is no coincidence these items contain the most bountiful amount of probiotic bacteria.

Scientific research in recent times has confirmed time and time again that bacteria (through influencing gut health) is absolutely essential for proper immune function, and it even directly impacts your mental health. That’s why the rampant use of antibiotics is fueling mass mental illness and chronic conditions as doctors prescribe antibiotics for everything from the common cold to the seasonal flu — without even recommending the addition of probiotic bacteria. Is it any wonder that the immunity of most individuals is seriously compromised?

There’s another popular saying: ‘health starts in the gut’. And that one I fully agree with.

And by sterilizing all conventional foods of key bacteria content through mass ‘nuking’ of the products, the issue is only exacerbated. And it’s already being done through irradiation of the food supply, pasteurization techniques, and more. Now, this microwave zap technology seeks to promote profits through desecrating the food supply even further.

As if you needed another reason to avoid conventional foods full of GMOs, additives, artificial sweeteners, and other problematic substances – well MicroZap may soon give you another.

K. Rowling, Stephen King, Zora Neale Hurston, and so lots of other writers you should not just explain to tales. They use their terms to explain total worlds and time intervals, and their audience are transported as a result. Descriptive writing is utilised just about everywhere. Dissertation Writing Services Singapore Dissertation Service Can You Pay...