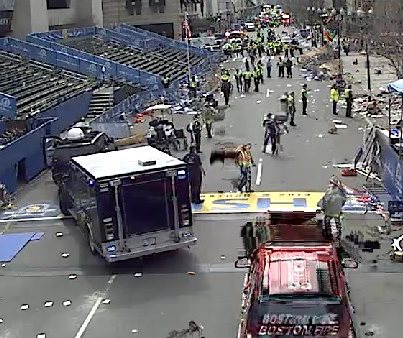 THE BOSTON BOMBS – BREAKING NEWS: The Associated Press news agency said there was a loud explosion on the north side of Boylston Street, just before the bridge that marks the finish line. REPORT by CHRIS EVERARD: Another loud explosion could be heard a few seconds later, and smoke could be seen rising from the scene of the blasts. TV helicopter footage showed blood staining the pavement in the shopping and tourist area known as Back Bay.So, what is in Boston? And what could be the MOTIVE to bomb runners on a MARATHON RUN? Well, Boston is a University town which has more than a dozen companies directly funded by the CIA. Through its venture capital arm, In-Q-Tel, the CIA has quietly put money into a dozen area companies in recent years.I-Q-Tel says it invests in startups “that have developed commercially focused technologies that will provide strong, near-term advantages (within 36 months)” to the intelligence community. The Arlington, Va.-based firm appears to see Massachusetts as a locus for the technologies; along with the string of investments, In-Q-Tel has one of its two satellite offices in Waltham (the other in Silicon Valley.)

Another important BOSTON character is JOHN KERRY who is at the moment on a whistle-stop tour whipping up war. KERRY and his family have close ties to BOSTON. His grandfather was known as Fred Kerry – he was a prosperous and successful shoe merchant, and Ida and two of the children — Richard (who would become the father of John Kerry) and Mildred — were able to afford to travel to Europe. On November 15th 1921, Fred Kerry filed a will leaving everything to his wife and then, on November 23rd, walked into a washroom of the Copley Plaza Hotel in Boston and committed suicide by shooting himself in the head with a handgun.

The suicide was front-page news in all of the Boston newspapers, reporting at the time that the motive was severe asthma and related health problems, but modern reports cite family sources saying that the motive was financial trouble: “He had made three fortunes and when he had lost the third fortune, he couldn’t face it anymore”, according to granddaughter Nancy Stockslager.

John Kerry has said that although he knew his paternal grandfather had come from Austria, he did not know until informed by The Boston Globe on the basis of their genealogical research that Fred Kerry had changed his name from “Fritz Kohn” and had been born Jewish, nor that his great-uncle and great-aunt, Ida Kerry’s brother Otto and sister Jenni, died in Nazi concentration camps.

Boston is very different to the rest of the USA. The FBI have a large centre in Boston – bombing marathon runners makes no political sense whatsoever. The incident falls into the same category as the Madrid train bombs and London bus bombs – neither incident makes any tactical sense – one of the London buses was exploded just yards from the Tavistock Institute and was actually off its normal route.

Mike Mitchell of Vancouver, Canada, a runner who had finished the Boston Marathon race, said he was looking back at the finish line when he saw a “massive explosion.” Smoke rose 50ft (15m) in the air, he told Reuters news agency, and people began running away and screaming after hearing the noise. “Everybody freaked out,” he said. Stragglers heading for the finish line were rerouted away from the smoking site of the blasts as the scene was locked down. The annual Boston Marathon attracts a large field of runners and tens of thousands of spectators.