Even Fed Chair Janet Yellen Admits America Is an Oligarchy

By Aaron Dykes and Melissa Melton

When avowed socialist Vermont Senator Bernie Sanders recently put Federal Reserve Chair Janet Yellen on the spot at a Capitol Hill hearing regarding the state of America as an oligarchy, Yellen basically admitted that’s what our nation has become. 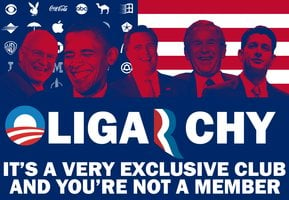 “In the U.S. today, the top one percent own about 38% of the financial wealth of America, the bottom 60 percent own 2.3 percent…” the Senator began, running down a harrowing description of the wealth gap in our nation which has helped to shift all the power into the hands of an elite few.

“Are we still a capitalist democracy or have we gone over into an oligarchic form of society in which incredible economic and political power now rests with the billionaire class?” Sanders point-blank asked Yellen.

Her reply? “So, all of the statistics on inequality that you’ve cited are ones that greatly concern me, and I think for the same reason that you’re concerned about them. They can shape the — determine the ability of different groups to participate equally in the democracy and have grave effects on social stability over time.

— And so I don’t know what to call our system or how to — I prefer not to give labels; but there’s no question that we’ve had a trend toward growing inequality and I personally find it very worrisome trend that deserves the attention of policy-makers.” [emphasis added]

Watch this video where Yellen dances around the question and technically admits (without semantically admitting it): that America is an oligarchy.

America is a land where wealth is greatly concentrated into the hands of the few rich elitists in the billionaire class — and all the real power in this country has concentrated with it.

Average, everyday citizens have a negligible amount of say in what goes on in this country and the policies that effect their daily lives. Oligarchy means only a few people wield all the the power. We are an oligarchy, and not just any oligarchy, a fascist oligarchy. Oligarchical collectivism rules the American day.

Don’t take our word for it, or even the Senator’s or Federal Reserve Chair’s. Check out this recent study by two professors from Princeton and Northwestern University which found through multivariate analysis that the billionaire class and organized groups representing big business interests — not the people — are the ones who have substantial impact upon U.S. government policy.

“When the preferences of economic elites and the stands of organized interest groups are controlled for, the preferences of the average American appear to have only a minuscule, near-zero, statistically non-significant impact upon public policy.” [emphasis added]

They went on to clarify:

“In the United States, our findings indicate, the majority does not rule — at least not in the causal sense of actually determining policy outcomes. When a majority of citizens disagrees with economic elites and/or with organized interests, they generally lose. Moreover, because of the strong status quo bias built into the U.S. political system, even when fairly large majorities of Americans favor policy change, they generally do not get it.”

So America…how is that miniscule, near-zero, statistically non-significant impact upon public policy working out for you?

How to Play Retro Games on Your Modern Mac Using OpenEmu

As companies move away from old consoles and new operating systems render lots of matches unplayable, it becomes much more challenging to play all of your favourite games in yesteryear. Game conservation has never been more important, but the sector as a whole has mostly failed . Valiant efforts are made by the Internet Archive...

How to play GBA games on PC

Video games are an gas for excitement for Generation X. Since video games encompass a large amount of digital sources, there are specific games which require special software or even a device to operate. Nintendo, Play Boy, Xbox, as well as PlayStation are some examples of devices and prerequisites that individuals must possess to play...

How To Know If You’Re Losing Fat Or Muscle?

Do you ever feel like your workouts aren’t intense enough, so they’re not effective? Or maybe you wake up feeling hungry, and it freaks you out because you think your body needs to eat more food, but you’re worried it will lead to weight gain? Maybe the scale has actually gone UP even though you...