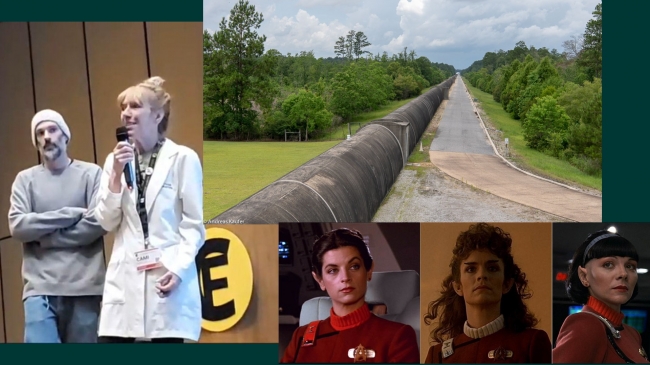 “Bupkis,” said Kathleen E. Saavik Ford, an astrophysicist at The City University of New York and a research associate at the American Museum of Natural History, scrolling through a list of telescope reports Thursday. She was looking the source of a mysterious, never-before-seen gravitational wave spotted by three separate detectors in Washington state, Louisiana and Italy. Nope. Nothing there…however:
“Saavik Ford, who wasn’t involved in the detection effort but followed it closely, told Live Science at the time that failing to see anything in the sky wasn’t a sure sign that nothing was there.” DING!
–We catch up with Zack as he tries to reacclimate to the real world post-FEIC in Dallas. It was life-changing, lots of amazing people and energy, plus he and Cami crushed it with their presentation! (Link below:)
–“Rise in flat-Earthers should be roundly celebrated as good for science & society…Really? Yes, because just as symptoms of an illness are useful for letting you know that you have an infection, so too is the rise of flat Earthism useful for indicating that both science and modern-day society are suffering from their own kinds of illnesses…For example, a July survey from the polling company Datafohla found that the seven percent of Brazilians who believe the Earth is flat are much likelier to have dropped out of high school, indicating that greater investment and inclusion in education is needed to reverse the flat Earth trend.” So, yeah, no agenda in the Fake News world toward us…
–Atomo’s laboratories are trying to save us from a coffee-less future by using “upcycled agricultural products” such as sunflower seed husks, watermelon seeds, and acacia gum—with a bit of yerba mate thrown in for caffeine—food scientist and company founder Jarret Stopforth says he and his team have at last developed a product that contains the“five core components of coffee — the body, the mouthfeel, the aroma, and flavor.” (No, they never said they were math-ers!)
As Pav’s fridge magnet said: “Ashaya svi’ such wuh yut ik ish-veh dash-tor wuh fnu-ven t’ vath.” (“Love in such a way that it hurts the hate of others.”)
From our beloved line-producer, Alan Holman: List of people who write the truth about Royal Reptilians: David Icke, Dr. Joe Llewells, Matthew Delooze, Zecharia Sitchin, Jan Van Helsing, Jim Marrs, Peggy Kane, Michael Mott, Pamela Stonebrooke, Patricia Smith, Stewart Swerdlow, Arizona Wilder, Credo Mutwa, Courtney Brown, Paul Shockley, Patrick Bellringer, Robert Dean, Sir Laurance Gardner, Stuart Wilde, Dr. Deagle, Dr. KarlaTurner,Dr. Richard Boylan, Dr. John E. Mack, and Micheal Tsarion.

There was one? Or not. Ok, so, days ago, we had a CONFIRMED sighting of a China spy balloon over Montana, threats FROM China, hissing like cats, sabers a-rattle ,then Friday during our live Have No Sphere ka-BLAM!! Spy balloon got taken out by US air superiority because these here are ‘MURICAN skies goshdarnit!! And...