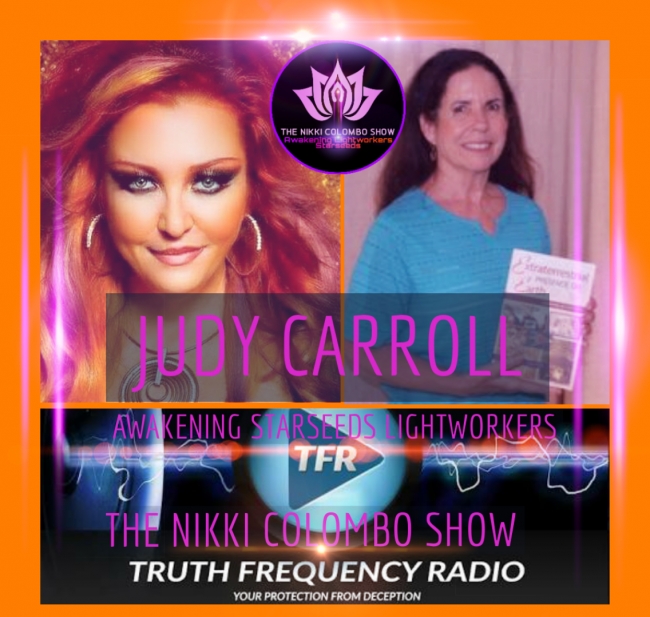 Tonight i talk to ET contactee and author Judy Carrol. Judy says ” I’ve had lifelong contact with off-planet beings, and in 1983, at age 30, I had a conscious daytime encounter with the beings known as Greys – the small (and sometimes tall) thin ETs with large black or blue eyes, bald heads and 3 or 4 fingers on each hand. During this meeting I recognized them as ‘family,’ and I eventually regained recall of having chosen to operate through a ‘dual,’ or ‘melded’ Earth human/Zeta grey consciousness.

Just to explain a little about this: the original Soul Essence – what we all are at the very core of our being, is comprised of pure Source Energy beyond racial, religious, cultural or planetary identity. This Soul Essence is totally integrated in Oneness. When the time comes to reincarnate into another life, the Soul Essence begins to attract energy frequencies to itself from the collective consciousness of whatever planetary culture it will be incarnating into for the coming life.

Everything is energy, so the energy frequencies that are required for the coming life build up around the pure Soul Essence like the layers of skin on an onion. In this way, the Soul Essence begins to take on an identity in synchronization with the chosen planetary collective consciousness, a species consciousness on that planet, and the racial identity and group mind-set that has been chosen for the coming life.

Those like myself, whose mission is to be a ‘bridge’ between two different planetary groups, synchronize energetically with two rather than with one single planetary collective consciousness.

Knowing that an important part of my mission on Earth would be helping to allay the fear of contact with an off-planet, non-Earth-human-type species, I purposely chose to not have conscious awareness throughout my childhood. In this way I was able to gain a deeper level of understanding and empathy with the terror experienced by many Earth humans who are having ET contact.

As a child I was very scared; too scared in fact to go to bed at night on my own; and this went on until age 10 or 11. This embarrassed me deeply for many years until eventually I began hearing about others who are known as ‘Experiencers’; that is, people who have undergone encounter experiences with ETs; and came to know how common this phobia is. Other fears included eyes, puppets, clowns and owls – fears often connected with visitation by the Greys/Zetas.

The major turning point happened in my life at age 30, with the daytime encounter mentioned earlier. At that time my husband and I were living on an acreage property outside of town. This encounter was frightening at first because it started with the total body paralysis (which I’m quite used to now), but then two of the Visitors suddenly appeared beside the bed on which I was lying. They were solid enough to block some of the light coming in through the window, but as soon as I saw them, my fear dissipated completely. I recognised them as being very familiar to me and in fact there was a real sense of ‘family’ with them. I believe there was a third one present, but it was the pair standing beside the bed who communicated with me.

Although not consciously aware at the time of what information passed between us, soon after this I developed a strong desire to learn tai chi and meditation, and to move back to the city. I also knew my future involved teaching of some sort, but I hardly even knew what tai chi was and, as a dancer I was a very physically orientated person, and just not into things like meditation. I also loved living on acreage and couldn’t understand why there was this strong urge to move.

It was years later when conscious recall of my conversation with the Grey family finally surfaced in my mind. During this 1983 encounter, which actually happened over 2 sessions a week apart, I was reminded of my mission and informed that it was “time for me to get back to work!” They then went on to explain that, in order to carry out this work, which involved being a ‘communication bridge’ between the 2 species, Grey and Earth-human, and also teaching Earth-humans about Energy, I’d need to do a lot of study and preparation myself.

After this encounter, life began changing dramatically. In fact I would go so far as to say I felt like a different person. As well as this, the whole situation was taken completely out of my hands, with a move back to the city initiated by the death of my 84 year old father-in-law and the need for my husband’s mom to come to live with us. Then other coincidences began falling into place one after the other, with opportunities to learn both tai chi and meditation literally ‘dropped into my lap’ as the saying goes, all within weeks of our change of residence.

Many years of hard training and study followed in both Disciplines and for 8 years I took part in a weekly meditation/psychic development group in which I learnt to do automatic writing. This resulted in a series of spiritual-type teachings being conveyed to me by the Greys. In 1989 I qualified as a tai chi instructor, which involved studies in Eastern healing philosophy and energy. In 1993 the opportunity to learn Reiki came my way.