Economy shrank 2.9% in first quarter of 2014 – the steepest decline since the Great Recession

Americans went into hibernation during the bitter polar vortex winter this year – and the U.S. economy slumbered along with them, dropping a stunning 2.9percent in the first quarter of 2014.

The sharp drop from January through March is the biggest dip since the Great Recession shaved 5.4percent off the Gross Domestic Product five years ago. It is one of the biggest contractions outside of a recession is recent history.

Economists believe most of the contraction was the result of a short-lived slowdown in spending due to an abnormally long and and harsh winter that disrupted shipping, shut down factories and kept consumers away from shopping malls and auto dealerships.

The first-quarter contraction reported Wednesday by the Commerce Department was even more severe than the 1 percent annual decline it had estimated a month ago. Besides the harsh winter, much of the downward revision reflected a drop in health care spending. Another factor was a bigger trade deficit than initially estimated. 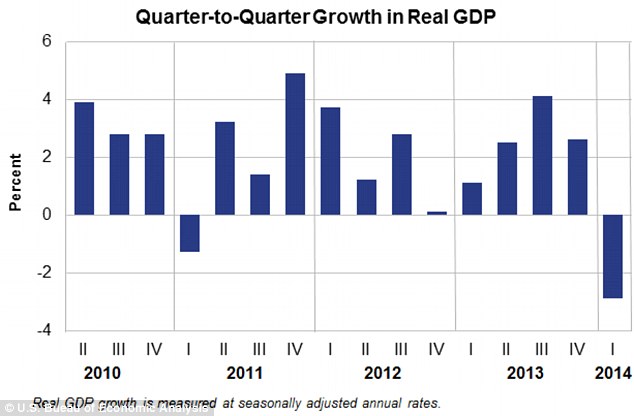 Drop: The economy shrank by a stunning 2.9percent in January through March of this year – thanks largely to a terrible winter

Most analysts also foresee the economy expanding at a healthy rate of around 3 percent in the second half of this year.

Reports on consumer spending, manufacturing and business investment have shown a solid rebound this spring. Orders for big-ticket manufactured goods excluding military hardware and for core capital goods, a proxy for business investment, rose strongly in May, a report Wednesday showed.

‘We have ample evidence that the first quarter was just a temporary setback for the economy, and we are climbing out of the hole in the current quarter,’ said Stuart Hoffman, chief economist at PNC Financial.

Last quarter’s 2.9 percent annual decline in economic activity, as measured by the gross domestic product, followed a 2.6 percent gain in the fourth quarter. It was the weakest showing since the economy shrank at a 5.4 percent annual rate in the first quarter of 2009 in the midst of the Great Recession.

Most of the downward revision from the government’s previous estimate of a 1 percent annual decline reflected a change in the estimate of spending on health care. The government had previously estimated a strong gain in this category reflecting implantation of provisions of the Affordable Care Act.

But data derived from an actual survey showed the government’s estimate was far too optimistic. Health care spending, instead of rising at a 1 percent rate, had fallen in the first quarter at a 0.2 percent rate. 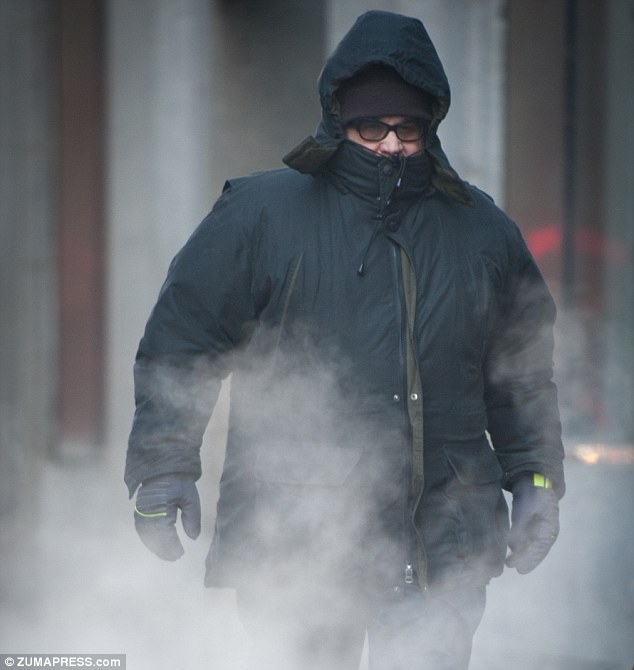 A long, nasty winter kept many shopper home, shut down factories and derailed deliveries in the first quarter of 2014

Analysts say solid hiring, growth in manufacturing and surging auto sales are contributing to a stronger economy. A stumbling housing recovery has been a concern. But even there, recent data on home sales and construction have been encouraging.

‘The larger contraction in GDP in the first quarter is not a sign that the US is suffering from a fundamental slowdown,’ said Paul Dales, senior U.S. economist at Capital Economics.

If economists are correct that annual growth will reach around 3 percent in the second half of the year, it would be a sharp improvement from the 2 percent annual pace of the first five years of this subpar economic recovery.

‘We should have a much better second half this year and a much better 2015 than 2014,’ said Mark Zandi, chief economist at Moody’s Analytics.

Zandi said he’s forecasting growth of 3.5 percent to 4 percent in 2015. If he’s correct, that would be the strongest year since the economy grew 3.8 percent in 2004.

‘In past recoveries, we have always gotten a year of very strong growth,’ Zandi said. ‘I think we will get that in 2015,’ helped by a long-awaited improvement in wage growth.

Of course, the optimistic projections could prove too rosy. Analysts see risks to their forecasts, primarily the possibility that tensions in the Middle East could cause oil prices to surge given the deteriorating crisis in Iraq.

Surging energy prices have preceded earlier economic slowdowns, including the most recent recession.