TOKYO: A shallow 5.4-magnitude earthquake hit eastern Japan on Tuesday, rocking buildings in Tokyo but there were no reports of any damage, seismologists said.

The quake hit at 10.03am (0633 IST) in Ibaraki prefecture, 160 kilometres northeast of Tokyo, and some 80 kilometres southwest of the crippled Fukushima nuclear plant, according to Japan Meteorological Agency.

The tremor was 10 kilometres deep, the agency said, and was followed eight minutes later by a very shallow 3.6-magnitude quake in the same area.

The initial quake was strong enough to gently rock high-rise buildings in the capital.

Tokyo Electric Power said the quakes did not affect the Fukushima Daiichi nuclear plant, where crews are working through the holiday season to cool reactors crippled by the 2011 tsunami.

An unusually large number of high-profile earthquakes sprung up across the globe over the weekend, causing extensive damage to a roadway in Mexico and leaving residents shaken in southern Europe, Egypt and the U.S. 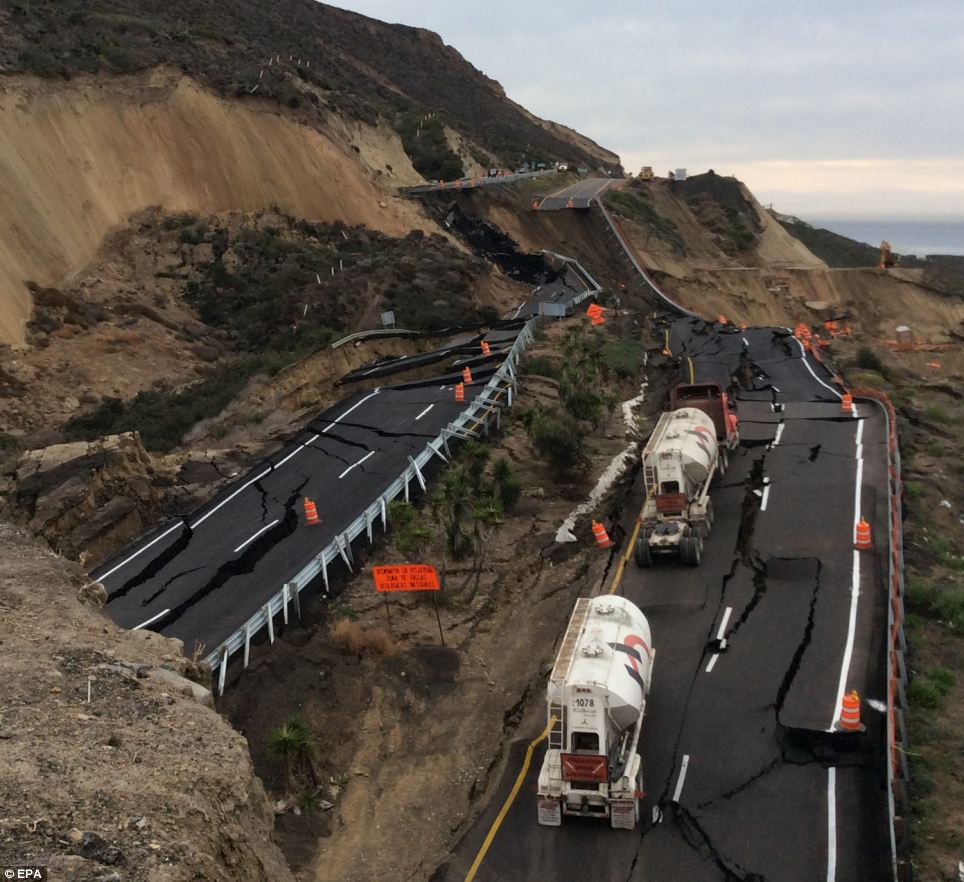 Saturday, an earthquake near the Mexico – U.S. border collapsed chunks of this 300-yard stretch of highway. (Via CNN)

“The road is about 60 miles south of Tijuana. It passes over geological fault. The earthquake ranged in magnitude from 1.3 to 4.3.” (Via WABC)

There were surprisingly no injuries, but one truck driver hauling 36 tons of cement had to wait hours before being pulled to safety. (Via NBC)

That was followed by a 4.9 magnitude earthquake nearly 1,500 miles away around Naples, Italy early Sunday morning. Residents reportedly slept in their cars in fear of aftershocks that might damage buildings. (Via U.S. Geological Survey)

In the U.S., Oklahoma dealt with several earthquakes over the last week with more striking over the weekend. Most were reported as minor between 2.0 magnitude and 4.9., but the Midwestern state has rarely dealt with earthquakes, until recent years. (Via KOTV) (Via Al Jazeera)

“We’ve had tornadoes and hail storms and those types of things, but never earthquakes.”

Great. So now Oklahoma has to be worried about the sky falling AND the ground dropping out? Well, not quite — at least not to a very high degree.

According to the Incorporated Research Institutions for Seismology, magnitude 2 and smaller earthquakes general happen several times around the world daily, while bigger ones are more rare. A magnitude 8 or higher usually only happens about once a year.

Many of these reported earthquakes were between 2.0 magnitude a 4.9. No extensive damage was reported in the ones in Turkey, Italy and Oklahoma and no injuries were reported in any of them. 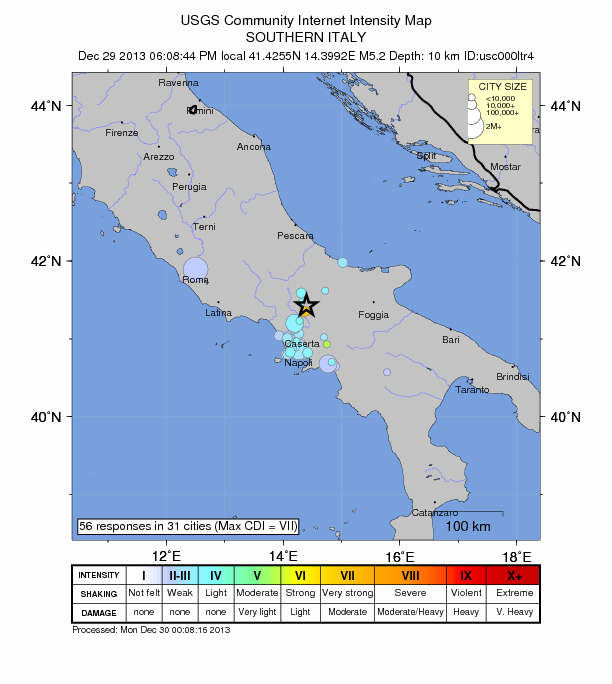 December 30, 2013 – NAPLES, IT – A 5.2-magnitude earthquake (USGS) Sunday evening rocked much of southern Italy, sending frightened people into the streets of Naples and country towns.

Naples Mayor Luigi de Magistris said there were no reports of damage in the city, the largest in Italy’s south. In Piedimonte Matese, a small town near the epicenter, Mayor Vincenzo Cappello told Sky TG24 there were no injuries and no major structural damage, although some buildings may have suffered minor damage.

Italy’s National Institute of Geophysics and Volcanology said the quake at 6:08 p.m. (1708 GMT) had a magnitude of 4.9 and struck some 10.5 kilometers (6.5 miles) underground. Its epicenter was roughly 35 miles northeast of Naples.

The Italian news agency LaPresse said the earth shook as far away as Puglia, in the southeastern heel of the boot-shaped peninsula. SkyTG24 TV reported that some people in Naples and elsewhere decided as a precaution to sleep in their cars Sunday night as aftershocks of much lesser intensity rattled the area.

Naples suffered a devastating quake in 1980. In the neighboring region of Molise, an earthquake in 2002 caused the collapse of a shoddily constructed school, killing 27 students and a teacher. 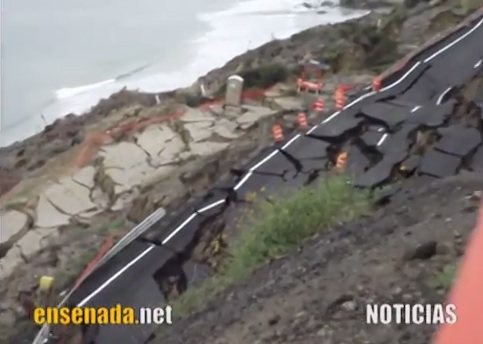 A section of toll road that connects Tijuana to Ensenada collapsed early Saturday morning, the images and video show how extensive the damage is.

The first video is a 2:49 minute newscast from Mexico showing some of the damage caused on the road by earthquakes.

[Update] More about how we are seeing this type of activity globally from Before it’s News reporter Live Free or Die, here.

One area of concern is this happened along the San Andreas Fault, as explained in the second video below by DAHBOO.

According to Global News, seven small earthquakes caused this collapse.

Mexico’s federal highway authority says the collapse occurred about 58 miles (93 kilometres) south of the border city of Tijuana. The road leads to the port city of Ensenada, on the Baja California peninsula. 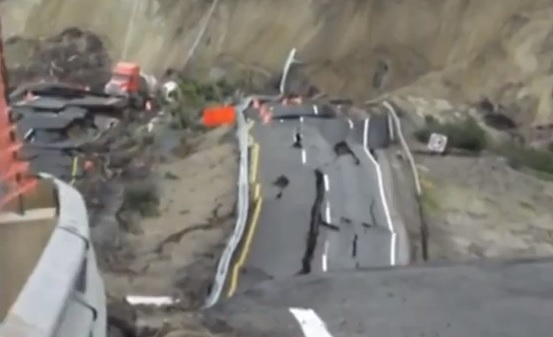 The agency said Saturday the road was closed in the early morning hours, after the collapse was detected.

The agency said the collapse was caused by seven small earthquakes ranging in magnitude from 1.3 to 4.3. It said the roadway runs over a known geological fault in the area, and that it had been raining heavily. No injuries were reported.

The road was under repairs according to officials. With the sinkholes, the increase of earthquakes in frequency and severity, all point to a very unstable earth right now.

[Update] Earlier this month it was reported that should the a massive Earthquake  strike California along the San Andreas Fault line, California is extremely unprepared and we to “Imagine the US without Los Angeles.”

They also warned that after studying what happend in Japan in 2011, they no longer believe the mid portion of the fault to be a safe zone, so to speak, that would prevent an earthquake from one side from moving along the whole fault line towards the other and vice versa.

“What we have found, based on laboratory data about rock behavior, is that such supposedly stable segments can behave differently when an earthquake rupture penetrates into them. Instead of arresting the rupture as expected, they can actually join in and hence make earthquakes much larger than anticipated,” said Nadia Lapusta, professor of mechanical engineering and geophysics at Caltech and coauthor of the study, in a statement.

One such “stable” segment of California’s San Andreas fault, a portion stretching from Paso Robles to Monterey, was generally thought to act as a buffer preventing a single earthquake from affecting both the Los Angles and San Francisco Bay areas. However, this study implies that, under the right conditions, just such a large-scale quake is possible.

This is why incidents like the landslide on Saturday, especially when earthquakes are cited as the reason, anywhere near the San Andreas Fault line are particularly concerning, because of the potential for a megaquake.