Did Israel Set Up Bill Clinton with Lewinsky Tape To Force Spy Release?

In October 1998 in a bid to gain the release of Israeli spy Jonathan Pollard, an Israeli team led by Prime Minister Benjamin Netanyahu threatened to blackmail President Bill Clinton with tapes of Clinton and then-intern Monica Lewinsky. When Clinton brought Israel’s request for Pollard’s release to CIA Director George Tenet, Tenet threatened to resign on the spot should Clinton cave and release Pollard. Clinton ultimately declined the Israeli request, though he would consider it once again before the end of his term. 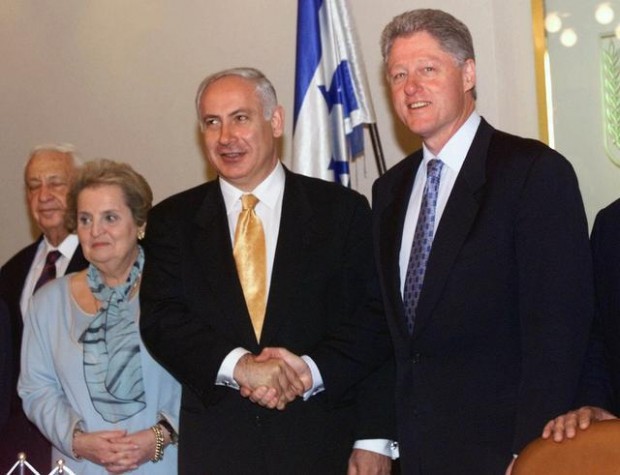 This bombshell claim comes from Daniel Halper’s new book on the Clintons’ rise back to power, “Clinton, Inc.,” in a section based on the author’s review of the so-called “Monica Files,” to which Halper obtained exclusive access.

The hundreds of pages of documents comprising the “Monica Files” detail numerous sordid allegations about President Clinton, Hillary Clinton and Monica Lewinsky as compiled by Lewinsky’s associates including “investigators, attorneys, and other Lewinsky advisors in the event that she might be involved in legal action against the president.”

Here is how Halper describes the meeting between the Israelis and President Clinton that October, which took place during a set of high-profile negotiations on the Middle East with Palestinian leader Yasser Arafat at the Wye Plantation near Wye River, Maryland:

At one point, Netanyahu reportedly pulled Clinton aside to press for a pet cause for the Israelis–the release of Jonathan Pollard, an American spy for Israel who was sitting in prison. Netanyahu pressed Clinton to release Pollard, which in itself was not an unusual request. But the Israelis present at Wye River had a new tactic for their negotiations–they’d overheard Clinton and Monica and had it on tape. Not wanting to directly threaten the powerful American president, a crucial Israeli ally, Clinton was told that the Israeli government had thrown the tapes away. But the very mention of them was enough to constitute a form of blackmail. And, according to information provided by a CIA source, a stricken Clinton appeared to buckle.

Intelligence officials in the United States or Israel will of course not confirm on the record the extent or substance of Israeli eavesdropping…In 2000 the conservative magazine Insight, after a one-year investigation by a team of reporters, claimed that the Israeli government had “penetrated four White House telephone lines and was able to relay real-time conversations on those lines from a remote site outside the White House directly to Israel for listening and recording.” At the time, an Israeli spokesman responded to the Associated Press, which confirmed that an FBI investigation was under way, that the claim was “outrageous.”

While naturally U.S. and Israeli officials would not confirm Halper’s account, the author writes: 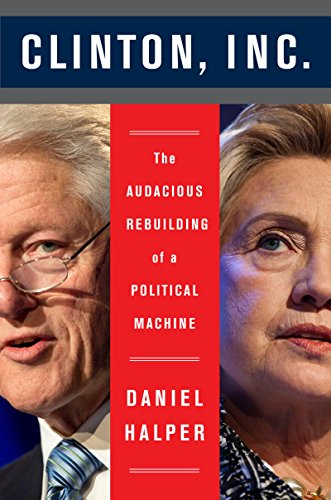 Title: Clinton, Inc.: The Audacious Rebuilding of a Political Machine

there is ample evidence to support the Lewinsky story about an Israeli-U.S. confrontation. On November 11, 1998, for example, The New York Times reported that Netanyahu and Clinton had indeed discussed Pollard’s release at Wye. And that the Israelis had told the president something that opened up the possibility of Pollard’s release, something Clinton had explicitly ruled out during the first six years of his presidency. A White House spokesman told a reporter for the Times simply that Clinton was “newly impressed by the force of Mr. Netanyahu’s arguments.”

The notion that Clinton was being spied on is further consistent with Clinton’s own insecurities as detailed in Independent Counsel Kenneth Starr’s investigative report on the president. As Halper notes:

“At the time, Lewinsky told prosecutors that Clinton suggested that “they knew their calls were being monitored all along, and the phone sex was just a put-on.” That is all the Starr Report offers…but Monica and her team knew more. They found evidence that the British, Russians and Israelis all had scooped up the microwaves off the top of the White House. Offering some additional support, Boris Yeltsin, the former president, wrote in his memoir that Russian intelligence had picked up on Clinton’s “predilection for beautiful young women.”

So impressed was Clinton that he brought the notion to the attention of CIA director George Tenet. Tenet, according to a number of news reports, vowed to resign on the spot if the administration acceded to the request. Faced with widespread outrage from his national security team, Clinton dropped the idea. He did, however, reconsider it one more time before leaving office.

As recently as this past March there were rumors that the U.S. was considering releasing Pollard as part of negotiations between the Israelis and Palestinians.

Pollard, a civilian intelligence analyst for the U.S. Navy, was arrested in 1985 and subsequently sentenced to life imprisonment for passing along thousands of classified documents to his Israeli handlers. Pollard’s lifetime sentence has generated much controversy, as it represents the heaviest penalty for any spy to pass information to one of America’s allies.

Former CIA Director James Woolsey has intimated that U.S. refusal to release Pollard, a Jew, may stem in part from anti-Semitism.

A New York Post article published in 1999 drawing on a book titled “Gideon’s Spies — The Secret History of Mossad,” recounts a similar plot by Israel to blackmail Bill Clinton with Lewinsky tapes, for a related but different end. The post article read:

The price Clinton paid for the silence of the Mossad spy agency was calling off an FBI hunt for a top-level Israeli mole allegedly installed at the White House.

Thomas says Tel Aviv used the tapes to stop the probe of an operative code-named “MEGA,” who was, and could still be, deep within the White House.

Halper argues in his book that the allegations in “The Monica Files” may be used by “reporters and Republican operatives–as part of what might be dubbed the [death by a] “thousand cuts” operation” in connection with a Hillary Clinton presidential bid in 2016.