More people still were missing, and authorities said the number was “fluid.” Earlier Sunday, they said there were at least 18 people missing, but that was before the additional bodies were discovered.

Snohomish County Fire District 21 Chief Travis Hots said crews were able to get in on foot.

“We didn’t see or hear any signs of life out there today so of course that’s very disappointing to all of our emergency responders here on the scene,” he said.

The entire debris field was not searched, Hots said, only the drier areas that were safe to traverse.

Despite that, Hots said crews were still in a “search and rescue mode. It has not gone to a recovery mode at this time.”

The mudslide Saturday destroyed as many as 30 homes and forced evacuations of nearby areas out of fears of flooding.

Washington Gov. Jay Inslee described the scene as “a square mile of total devastation” after flying over the disaster area Sunday. He assured families that everything was being done to find their missing loved ones.

“There is a full-scale, 100% aggressive rescue going on right now,” he said. 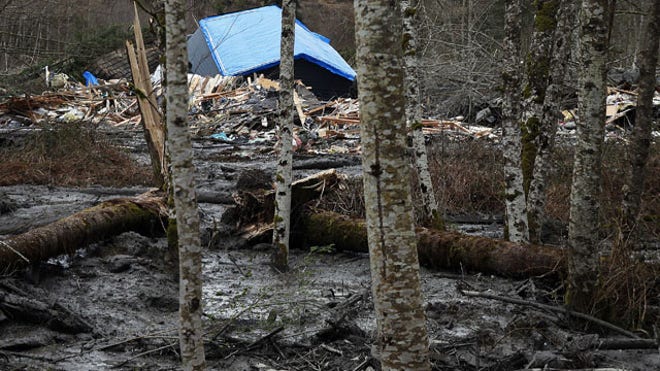 The governor declared a state of emergency. He said he is talking with the Federal Emergency Management Agency about a federal disaster declaration.

“My dad is a quick thinker and he is someone who takes action in an emergency. If he had any warning at all, we just have to think he is somewhere and he’s safe and they just can’t reach him right now,” she said.

Hots said the number of missing could change because some people may have been in cars and on roads when the slide hit just before 11 a.m. Saturday.

The mud was so thick and deep that searchers turned back late Saturday after attempting to reach an area where voices were heard crying for help.

Rescuers couldn’t hear any signs of life once they got closer, and the decision was made to back out for safety reasons, Hots said.

As authorities tried to determine how to get responders on the ground safely, helicopters were flying over the area looking for people who may have been able to get out on their own and for any other signs of life.

Hots said the slide debris has the consistency of quicksand.

The slide has blocked the north fork of the Stillaguamish River.

“The mudflow is moving. We have a massive amount of water that is beginning to back up and has backed up since this thing blocked the river,” Hots said.

People downstream from the blockage were advised to evacuate Saturday night but the evacuation recommendation was lifted Sunday because it didn’t appear that there would be a massive breach all at once, rather it was trickling out.

Inslee addressed the issue during a news conference Sunday, saying “The conclusion that’s been reached by the analysts is that the risk is not great enough to cause an evacuation and that the river will find its way through some kind of a graded channel over the days and weeks to come to be relieved.”

The cause of the slide is believed to be groundwater saturation from heavy rainfall this month.

“It sounds very realistic with all the rain earlier in the month,” AccuWeather senior meteorologist Alan Reppert said. “There hasn’t been much precipitation in the last few days.”

Everett, Wash., 31 miles southwest of Oso, has had 5.64 inches of rain this month — more than 2.5 times what the city typically receives in March, AccuWeather reported.

“Think back to what Mount St. Helens and Toutle River looked like, and that’s what we’re looking at,” said Rodney Rochon of the Snohomish County Sheriff’s Office.