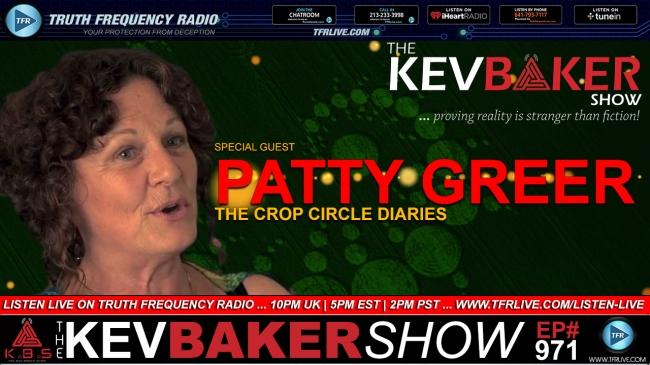 Award winning documentary film maker Patty Greer joins me to discuss her research into the crop circle phenomena. Patty is the woman behind “Crop Circle Diaries”, one of the most indepth & scientific documentaries covering what is still considered a fringe phenomena. Patty gives us her theories on what the circles are, how the are made & by whom. On top of this we hear a story about how even a man-made circle adds weight to the case being presented by Patty on the show.

Towards the end of the show we cover the fallout surrounding David Wilcock’s public parting of ways from Gaia TV & how one thing has led to another, with Patty herself at the centre of of the Gaia story.

Patty Greer is a prominent UFO filmmaker who produced 8 full feature UFO films in 10 years that received 8 prestigious awards, including 5 EBEs at the International UFO Congress Convention. Her films offer unrelenting evidence and explosive footage of crop circles being produced by spinning plasma balls of light. Greer’s conclusion after producing 8 UFO films and working closely with Penny Kelly, the real lab partner of the great scientist William Levengood for the final 16 years of his life, is that crop circles are produced by counter-rotating spinning plasma vortices coming out of the earth – not from the sky!

Greer’s 8th film, “Crop Circle Diaries” presents footage where “balls of light” create a crop circle in seconds in both England & France! Greer’s movies were filmed in the epicenter of the crop circle phenomenon in Wiltshire England, UK and feature only the real ‘Croppies’ who frequent these stunning formations year after year. Greer is intuitive and telepathic which is how she co-produced the films with ‘Other-Dimensional-Beings’ without training or research or a team.

Patty spent 9 weeks of summer in 2007 and 2008 laying in UK Crop Circles and consistently filming them. She visited more than 100 UK Crop Circles and fearlessly filmed from micro-light planes with no door on her side and barely a seat belt! Patty entered her first UK crop circles in 2006 and knew instantly that she had stepped into a very different reality and she was hooked! She was mesmerized by the sensations and returned to the UK in 2007, 2008, 2010, 2011 and 2014 with cameras.