Congress Confronted About 9/11 by Wave of CSPAN Callers

CSPAN’s Washington Journal news show makes it easy for anyone to talk to members of the U.S. House and Senate, Washington bureaucrats, and media pundits live on TV. Recently, callers have used the opportunity to bring attention to the explosive World Trade Center evidence and put legislators on the spot.

The latest surge in discussion about 9/11 began when someone called in to ask Senator John McCain about WTC Building 7, and since then, members of Congress from both parties have been confronted by callers with questions about the destruction of the World Trade Center’s high-rise buildings. 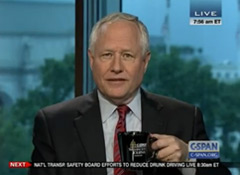 Some politicians have tried to ignore the issue, some have dismissed it, and others nervously tried to dance around the subject – but in every case, the viewers have been exposed to the existence of evidence for controlled demolition of the WTC Towers that Congress has suppressed for years.

When Senator Tammy Baldwin (D-WI) was asked about the evidence of explosives at Ground Zero, she responded,

William Kristol, cofounder of Project for a New American Century (PNAC) and founder of the Weekly Standard, was hit with 9/11 questions from two different callers during the same interview. The second caller asked,

“Given that more and more people have stopped trusting the government and corporate media now, what can the establishment do to keep people from Googling ‘Building 7’ and realizing the buildings in New York were brought down in a pre-planned controlled demolition on 9/11?”