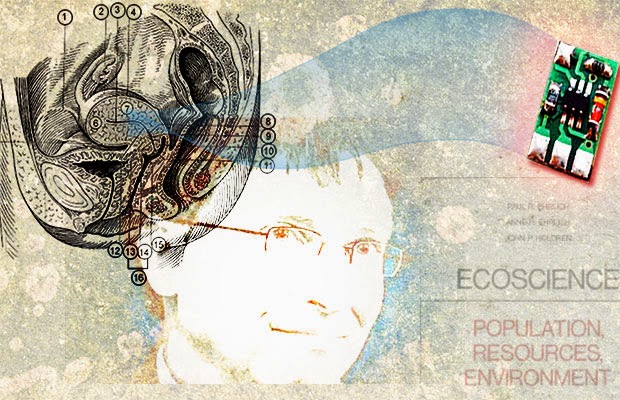 Here’s one more for the coming “Internet of Things” — an implantable birth control microchip could hit the U.S. market by 2018 thanks to funding by globalist billionaire and population control enthusiast Bill Gates.

The new microchip implant reportedly lasts up to 16 years and can be controlled via wireless remote device, but don’t worry; researchers are quick to reassure that each microchip comes with “secure encryption” (you know, the kind that’s even being hacked and exploited in the new smart light bulbs).

Considering this is the same guy who has also funded an oral bait vaccine that sterilizes rats (see: “Rodent Biocontrol and Crop Protection” here) and genetically engineered vaccinating mosquitoes, a treatment that by its very nature couldn’t possibly generate the consent of all patients involved, the profound implications of Gates’ new birth control microchip on human reproduction are astounding.

Of course…this technology could also fulfill the use described by current White House Science Czar John P. Holdren and his writing partner Paul Ehrlich in their 1977 text Ecoscience for involuntary fertility control when they declared, “The development of a long-term sterilizing capsule that could be implanted under the skin and removed when pregnancy is desired opens additional possibilities for coercive fertility control. The capsule could be implanted at puberty and might be removable, with official permission, for a limited number of births.” (Pp. 786-7)

Aaron Dykes and Melissa Melton created TruthstreamMedia.com, where this first appeared, as an outlet to examine the news, uncover the deceptions, pierce through the fabric of illusions, know the real enemy, unshackle from the system, and begin to imagine the path towards taking back our lives, one step at a time, so that one day we might truly be free…