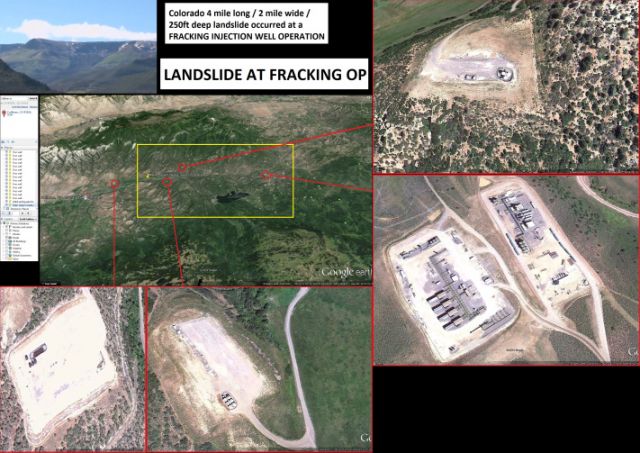 Three men are missing in the latest fracking disaster, a 4-mile by 2-mile mudslide just East of Collbran Colorado, that mainstream news is covering up, reporting it was likely triggered by natural causes. Occidental Petroleum’s fracking operation is at the heart of the area.

The search for the missing men was called off due to the threat of the unstable ground.

The three men had gone out to check instability issues.

They were checking on “irrigation problems caused by an initial slide Sunday” when a large chunk of a ridge broke off, sending soggy earth spilling like wet cement.

“Indeed it is the only injection well operation for miles, which is DIRECTLY at the landslide location, and explains why / how men were sent out to check on the location,” said citizen reporter Dutchsinse.

Oil and gas well drilling causes instability in the earth, such as human-made seismic activity that can result in landslides, according to a study that says the strongest quakes are associated with deep-injection wastewater disposal wells. Such

Experts agree fracking is accounting for the increase in quakes and other “natural” disasters plaguing the country.

Expanded “oilfield operations, including extraction and fluid injection exacerbates ground movement that results in landslides and local seismic events with potential loss of life and property.

Oxy is the same company held responsible for much of Louisiana’s woes, including its 35-acre “sinkhole.”

Pope Francis stated last week that fracking is a sin. How many deaths will it take for the public to believe this is an immoral corporate government  activity?

Authorities braced for the possibility of another landslide in a remote part of western Colorado as they surveyed a massive debris field Tuesday amid dangerously unstable conditions that led them to call off the search for three ranchers missing there.

But it might not be safe enough to do so until summer.

“We don’t want to create any more tragedy than we already have,” Hilkey said.

The three men were checking on irrigation problems caused by an initial slide Sunday when a large chunk of a ridge broke off, sending soggy earth spilling like wet cement.

Now for the Cover Up

Whenever these events occur, the oil and gas industry goes into cover up mode.

“Ironically the landslide area contains the only nearby FRACKING INJECTION WELL OPERATION,” Dutchsince wrote. “Sorry for the all caps on that, but its necessary to drive home the point on this.

Fox News is quick to blame the disaster on natural causes:

“The slide most likely was triggered by runoff from Grand Mesa — one of the world’s largest flat-topped mountains — following two days of strong rain,” it quotes Sheriff Hilkey.

Dutch says, “Main stream media showing this location in their videos, clearly the landslide location contains the only fracking/injection well operation for several miles in any direction.”

“There are tens of thousands of injection wells in the United States. So in the case of induced seismicity, these are wells that are taking in fluid constantly, injected with fluids for a period of time – months, years, decades.”

“With injection wells, fluid can migrate into nearby fractures and fault zones that relieves pressure inside the fault and allows slippage to occur,” stated Engle.

It is possible that injected fluids change friction and stickiness of minerals on fault lines. Another concept is they change below-surface pressure because the fluid is trapped and builds, and then “sets off something that’s about ready to go anyway.”

Environmental modifications (ENMOD) by drilling even simple water wells is directly linked to man-made seismic activity, according to a new study.

“‘Environmental modification techniques’ refers to any technique for changing – through the deliberate manipulation of natural processes – the dynamics, composition or structure of the Earth, including its biota, lithosphere, hydrosphere and atmosphere, or of outer space,” states the Convention on the Prohibition of Military or Any Other Hostile Use of Environmental Modification Techniques. (United Nations, Geneva: 18 May 1977)

“We don’t want to create any more tragedy than we already have,” Hilkey said.

Some of those tragedies cause by fracking include not only injuries and death fro earthquakes and mudslides, but also miscarriages and suicide, none of which mainstream news is reporting.

If such is the case, it’s time to ban fracking.