Clinton Decides To Play Russian Roulette, Instead of Falling On Sword Like Petraeus 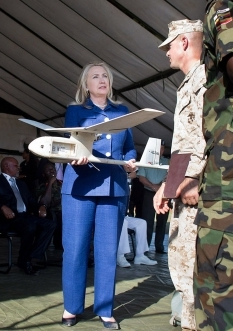 U.S. Secretary of State Hillary Clinton will testify on a report expected to be released next week on the deadly attack on the U.S. diplomatic post in Benghazi, Libya, a top Republican lawmaker said on Friday.

“I have just received confirmation from Secretary Clinton’s office that the secretary of state will appear before the House Committee on Foreign Affairs to discuss, in an open hearing, the findings and the recommendations in the report,” Representative Ileana Ros-Lehtinen said in a statement.

Ros-Lehtinen is chair of the House of Representatives Foreign Relations Committee, which has already held several hearings and classified briefings on the attack.

The attack killed U.S. Ambassador Christopher Stevens and three other Americans, and raised questions about the adequacy of security in far-flung posts.

Russia has accused the US of trying to start a new Cold War after Congress passed a law banning Russians linked to serious human rights abuses from entering America.

Moscow furiously claimed that the new law, which also bars blacklisted Russians from owning US land and using the banking system, was evidence of a “vindictive desire” to damage Russia’s world standing.

“Apparently, Washington has forgotten what year this is and still thinks the Cold War is going on,” the Russian foreign ministry said on its official Twitter account. It added that the move would “adversely affect the prospects of bilateral cooperation” between the two powers.

Sergei Lavrov, the foreign minister, later said Russia would respond by introducing its own visa ban for US human rights abuses.

“At my meeting with Hillary Clinton in Dublin I confirmed that we will deny entry [to Russia] to Americans who are certainly involved in human rights violations,” he said after meeting the US Secretary of State and Lakhdar Brahimi, the UN and Arab League envoy to Syria, in Ireland on Thursday.

The so-called Magnitsky Law prompted calls from British critics of Russia for similar action from the Government, amid concerns about the death of an exiled Russian in Surrey. Alexander Perepilichnyy had been assisting a criminal inquiry prompted by the whistleblowing lawyer whom the new US law is named after.

The American law was approved overwhelmingly by the US Senate last night as part of a raft of measures primarily aimed at restoring normal trade relations between Russia and America.

The package replaced a 38-year-old Act that imposed trade sanctions on the Soviet Union for not allowing Jewish Russians and other persecuted minorities to emigrate from the Communist bloc.

The human rights law was named after Sergei Magnitsky, a Russian lawyer who died in a Moscow prison in 2009 after exposing an alleged $230 million (£143 million) tax fraud by Russian police and officials.

Mr Magnitsky, who was working for an American-Russian law firm, claimed to have been tortured. He died after almost a year in custody, a week before he would have had to be released or face trial.

U.S. Secretary of State Hillary Rodham Clinton warned Thursday about a new effort by oppressive governments to “re-Sovietize” much of Eastern Europe and Central Asia, taking particular aim at Russia for its crackdown on democracy and human rights groups just hours ahead of critical talks with that country’s foreign minister.

Clinton’s meeting with Russian Foreign Minister Sergey Lavrov will focus on the violence in Syria. They’ll be joined in Ireland’s capital by the U.N. mediator for the Arab country, Lakhdar Brahimi, in a three-way attempt to breathe new life into diplomatic efforts to stem the violence.

Russia to retaliate over US Magnitsky rights act 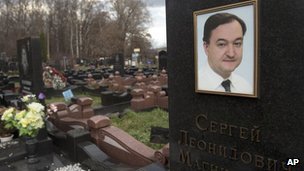 Russia says it will bar Americans guilty of human rights violations, in response to a US bill that targets Russians guilty of such offences.

“We will bar entry to Americans who are in fact guilty of human rights violations,” he said.

The US bill, adopted by Congress on Thursday, normalises trade with Russia, but blacklists Russian rights abusers.

The legislation passed by large majorities in the House and Senate, and President Barack Obama is expected to sign it into law.

Under the bill, the US would withhold visas and freeze financial assets of Russian officials thought to have been involved with human rights violations.

The Russian foreign ministry called the bill “a performance in the theatre of the absurd”.

It warned that the measure would have a “very negative impact on the prospects for bilateral co-operation”.

“It’s strange and wild to hear such claims about human rights addressed to us by politicians of the very state where in the 21st Century torture and the kidnapping of people all over the world were officially legalised,” the ministry said.

The US is trying to prevent Russia from recreating a new version of the Soviet Union under the ruse of economic integration, Hillary Clinton warned on Thursday.

“There is a move to re-Sovietise the region,” the US secretary of state told a news conference in Dublin hours before going into a meeting with her Russian counterpart, Sergei Lavrov.

“But let’s make no mistake about it. We know what the goal is and we are trying to figure out effective ways to slow down or prevent it.”

Oh sure, let’s make no mistake about it!

Is Mrs. Clinton concerned that the Russians will orchestrate something likeNAFTA or the Free Trade Area of the Americas or the Trans-Pacific Partnership?

Is she afraid that the state will again own factories that produce junk automobiles?

Perhaps Clinton is worried that prisoners, languishing in neo-Soviet gulags, will be used for slave labor in the state’s war industries. And these war industries would support a vast network of military bases all over the world…

If I keep going, I’m definitely going to ruin my coffee high. Maybe someone else wants to take a stab at it. 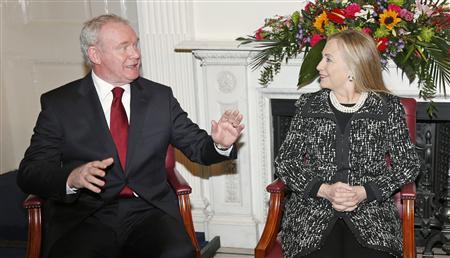 By David Brunnstrom and Ian Graham

(Reuters) – U.S. Secretary of State Hillary Clinton on Friday condemned a wave of street violence during a trip in Northern Ireland, saying it showed the peace process she has long supported in the British province was not yet complete.

Clinton arrived in Northern Ireland, following Dublin talks on Syria with Russian Foreign Minister Sergei Lavrov, in a week that has seen three riots and the arrest of four suspected militant nationalists after the discovery of a bomb in a car.

“There can be no place in Northern Ireland for any violence, any of the remnants of the past need to be quickly, unequivocally condemned,” Clinton told a news conference she held with pro-British First Minister Peter Robinson and his deputy, former Irish Republican Army leader Martin McGuinness.

She said violence was from “a small minority of people who try to stir up passions or emotions. It is unacceptable and must be repudiated by everyone”.

Clinton travelled to Northern Ireland several times in the mid-1990s while her husband helped broker the 1998 Good Friday peace accord, his hands-on approach widely recognized as crucial at moments when the agreement looked like crumbling.

At least 3,600 people were killed during the previous three decades as Catholic nationalists seeking union with Ireland fought British security forces and mainly Protestant Loyalists determined to remain part of the United Kingdom.

The 1998 peace has mostly held, although militant nationalists have stepped up attacks in recent years and community relations remain fragile with riots erupting every few months at flash points in the city.

The latest riot erupted on Thursday night when a policeman was injured after protesters hurled bricks and bottles to vent their anger against nationalist councilors who voted to remove the British flag atop Belfast City Hall after 100 years.

Smaller protests took place across the province on Friday.

Police on Friday said four men were arrested after a home-made armor-piercing rocket, of a type often used in Iraq and Afghanistan, was recovered from a car in a Republican area of Londonderry overnight.

A member of the British parliament for the non-sectarian centrist Alliance party, Naomi Long, fled her house in Belfast overnight after receiving a death threat over her party’s support of the removal of the flag from City Hall.

“Peace does need sacrifice, compromise and vigilance day after day. We have seen this week that the work is not yet complete,” said Clinton, on one of her last trips as secretary of state.

Last month, militant nationalists shot dead a prison officer in just the fifth fatal attack on a member of the security establishment since 1998. Signs at the airport where Clinton landed on Friday said “Threat Level ‘Severe'”.

As first lady, Clinton supported pro-peace women’s groups in Northern Ireland and visited people wounded in the 1998 Omagh bombing, the deadliest attack in three decades of violence commonly known as the “Troubles”.

On Friday she met some women she has remained friends from those groups as well as Sinn Fein Leader Gerry Adams and former Democratic Unionist Leader Ian Paisley, two bitter rivals who symbolized the Troubles for many.